Also this reviews will be accompanied by a section with graphs of technical measures of the most important parameters.
There is no such thing anywhere else, as far as I know. Not even the manufacturers themselves detailed the technical features of their own devices at this level.
This new section has been developed for an objective comparison of different devices.
In order to avoid interpreting the measurements incorrectly, it is very important to read the warnings carefully the first time.

The Korting Royal Syntektor 55W is the most prestigious model made by Leipzig's factory that year.
We already restored some Korting Royal Syntekor and while listening we were amazed by the unusual dynamic characteristics. Also the 55W proved itself up to expectations. The high volume listening of this device is extremely rewarding and often surprising. All this due to two elements: the transducers and a particular circuitry of the final stage.The main (loud)speaker is a fabulous Isophon P23/25/105, with an AlNiCo magnet of 10500 Gauss and a linear response from 65 Hz to 10 kHz. It can withstand strong mechanical stresses and moreover it is fitted in a solidly built piece of forniture.
A 17 cm Medium adds brilliance on 900 – 1200 Hz range, the most important one to have a great experience while listening.Not least the two big electrostatic tweeter, in plain view: their surface is very wide when compared with others usually placed on radios.Moreover, let's talk about two little circuit's tricks: an oversize output transformer, making it very difficult to reach saturation and an unusual two power pentodes EL84's drivers.As in the photo (9) the preamplifier stage is entrusted to a variable slope EF89 pentode that controls directly the first EL84 grid. Thereafter the signal is sent to the EABC80 triode's grid which dephases it of 180 degrees and then sends it to the second EL84. Such circuits allows a high control voltage of the two final valves which can reveal all their power.

Conclusions: just one, this device must be listened at high volumes to fully enjoy its largeness.

The Royal Syntektor 55W recondings are made to highlight its very notable dynamic characteristics. Anyway these recordings don't let us appraise the impact from listening at high/loud volume with this device. We get only a perception of its quality. 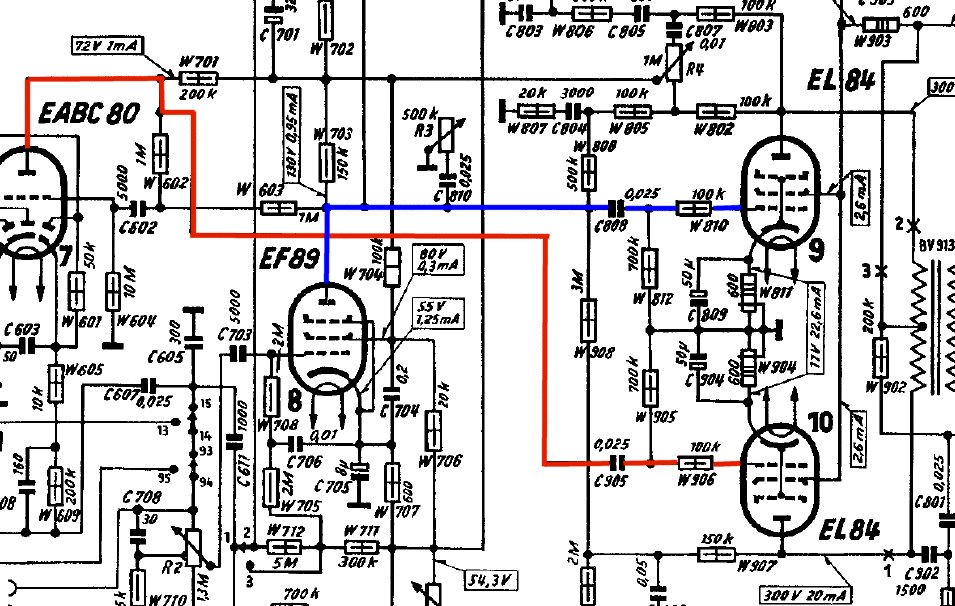 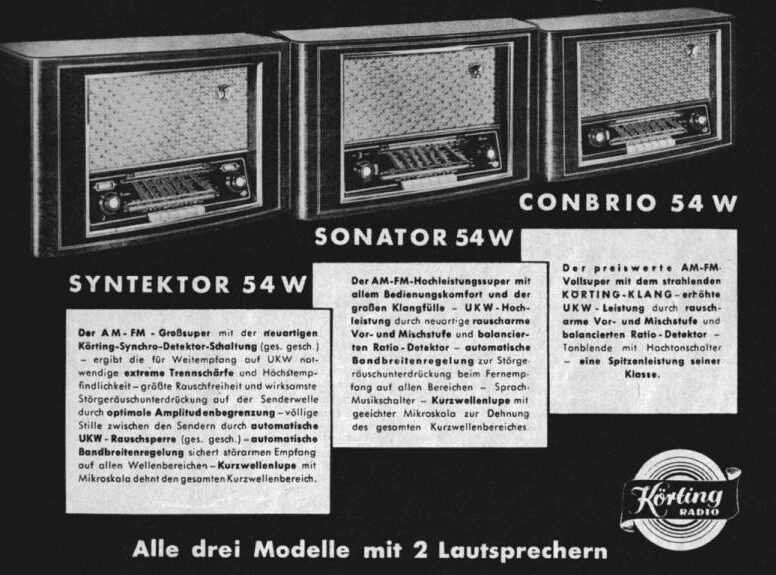 The first track is “I've been loving you too long” by Otis Redding, recorded in 1965, written with Jerry Butler and inspired by love problems Otis was going through at the time. At Monterey Festival in 1967 audience was thrilled by Jimi Hendrix, who set on fire his handpainted Stratocaster at the end of his exhibition and Otis Redding, the most charismatic voice of Soul music. Few months later, Otis and his bandmates will die in a plane crash at Lake Monona, Wisconsin. My favourite cover of the song is the one by Ike & Tina Turner.
The second track is one of Cesária Évora's masterpieces, “Isolada”, written in 2003, first track of the album "Voz d'amor". Cesária's smooth voice dives you into Cabo Verde's atmosphere and in Morna, a music genre typical of these islands in which the main instruments are violão and rabeca (guitar and violin). Rhythm is slow and the composition usually monotonous. The main composer was Eugénio de Paula Tavares. The archipelago was used as a headquarter for slave trade between Africa and America; after the abrogation of slavery in Portuguese Empire, recurring droguths and desertification, which led to famine and plagues, natives inhabitants were forced to leave. This social background gave birth to Morna.The third track is from Tosca, “Vissi d'arte” by Giacomo Puccini – performed by Maria Callas, stage name of American-born Greek Anna Maria Cecilia Sophia  Kalogeropoulos, one of the most renowned opera singers of all times. The Soprano has the highest vocal range of all female voice types, higher than Mezzosoprano andContralto, it requires a range of two octaves and a strong virtuosity, but Callas was a Coloratura soprano, she was able to perform roles as mezzosoprano, soprano leggero and soprano lirico. Not by chance she is still remembered as “La Divina”.The fourth track is the catchy song by Eros Ramazzotti “Più bella cosa”. The song is dedicated to Michelle Hunziker, who he met at the time, but also (mainly) to Music, Eros' first true love that he will celebrate in many other songs. The lyrics there are clear references to memories and emotions (thrills) of his past rather than his love with Michelle.The last track is one of Queen's most famous songs, “We will rock you”. Its history is really interesting: in a 1977 concert the band felt the crowd so engaged while singing along. They felt people had no room to dance and move freely, the only thing they could do was to clap hands, to stomp with feet and to sing. Hence “We will rock you” was born, a song about three ages of man: the child, the grown-up and the elderly. 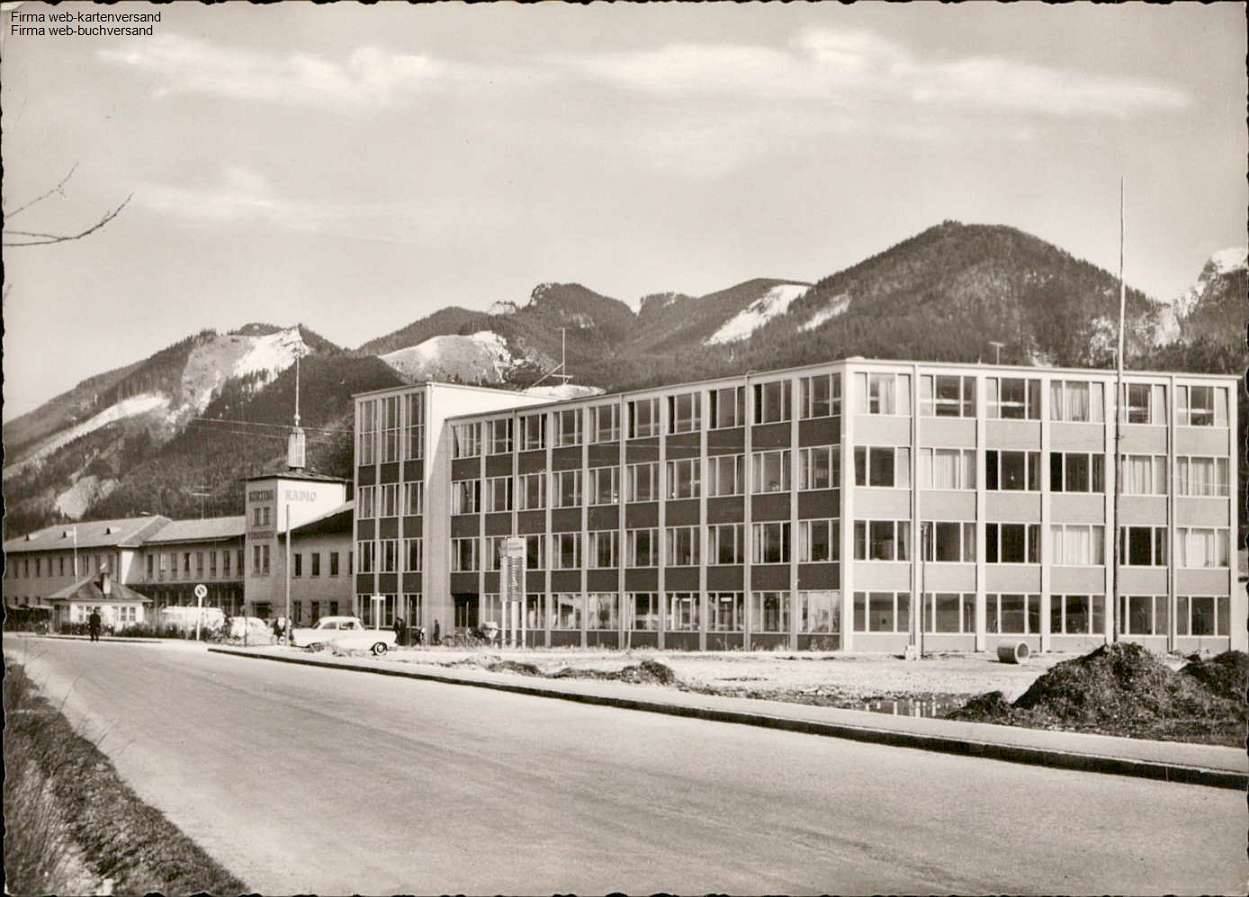 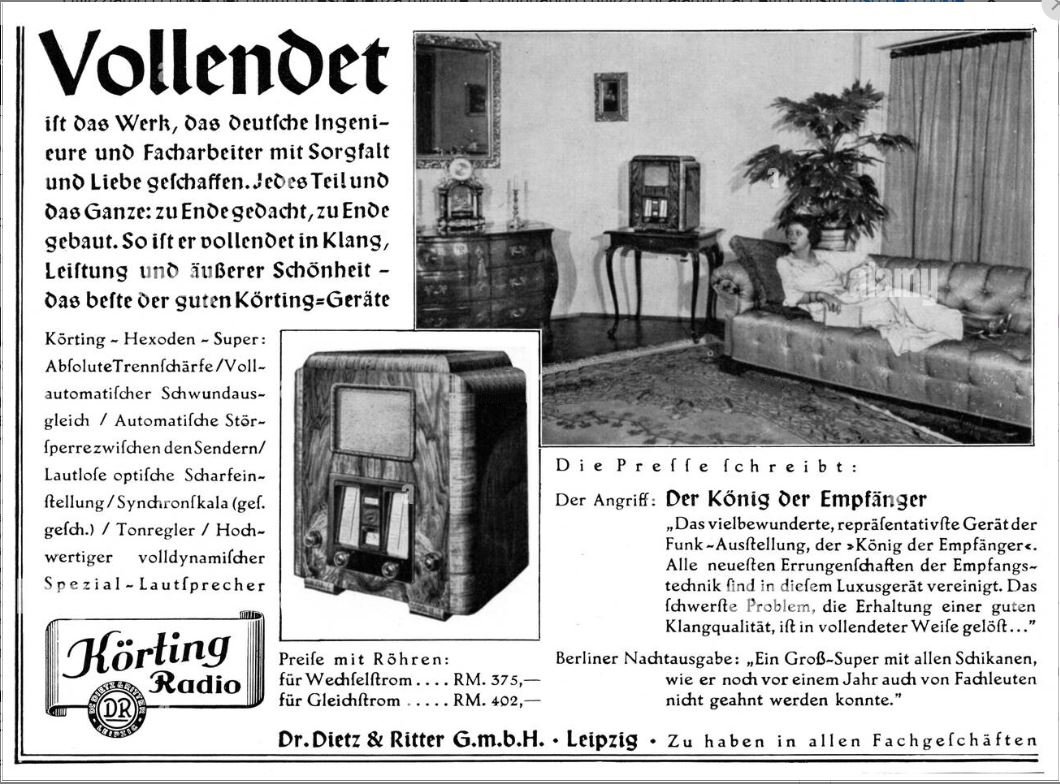 Körting-Radio-Werke Oswald Ritter was founded by Karl Oswald Max Ritter after leaving Dietz & Ritter GmbH in 1940.At they beginning it produced radio receivers, transformers and electronic devices.
Körting branded radio receivers have great success thanks to their high-quality.After World War II, the company ventures with Carl Zeiss but in 1946 productions volumes drop due to the company's decommissioning.
In 1948 it is seized and transferred to public property and managed by VEB Radio and Telecommunications Technology.In 1949 Ritter moves to Upper Bavaria with some of his employees and in 1951, with a 5 millions DM lended by Bayerische Staatsbank, he acquires Belwe GmbH in Grassau, a producer of flatirons, toasters and little lamps, expanding the production to radios, speakers and electro-medical devices.Körting's sales in West Germany are low compared to its competitors and the internal bank orders Gerhard Böhme to reorganize the company at the beginning of 1953. Oswald Ritter resigns as an associate in the summer of 1953 and Böhme becomes the company's manager.In 1955 Ritter definitively leaves the company and dies on October 2nd, 1959 after a long illness.The company agrees a deal with Neckermann, an important mail-order company in Frankfurt. Neckermann nuys and sells all the televisions and radios with the brand Neckermann-Körting.In 1957, Körting laucnhes the Dynamic 830W, the first radio in the world with dynamics expander.From 1952 to 1964 sales are 7-times higher.
In 1963 and in 1964, Körting has to increase its capabilities due to increased sales. In quick succession the company opens new branches in Grödig, near Salzburg, Möbelwerke Wallerstein and Körting-Italiana in Pavia. In this period Körting produces devices for Kuba-Imperial , Elac , Blaupunkt and Siemens.In 1970, Körting makes a deal with Yugoslavian Gorenje to build televisions in their headquarters in Slovenia.In 1972 Kuba ceases production, followed by Elac in 1978, and Karstadt takes over Neckermann, interrupting the cooperation with Körting.In 1978 Körting filed for bankruptcy , on September 1st 1978 Gorenje acquires the main factory in Grassau, but at the end of March 1983 also Gorenje Körting Electronic goes bankrupt. 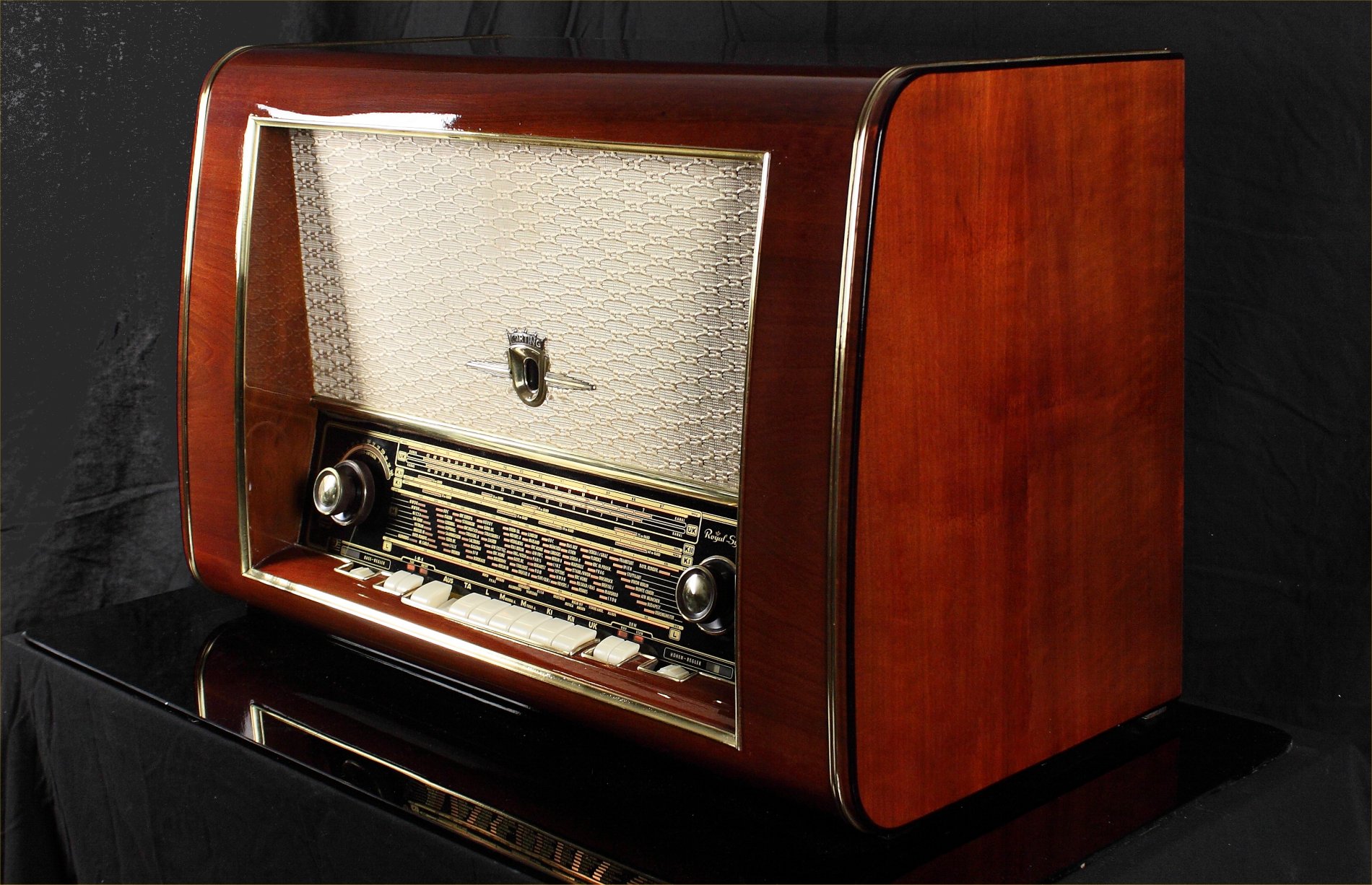 IMPORTANT REMARK
(to be read carefully at least the first time)

ation caused by the loudspeakers' inductive load and the effect of the mechanical resonance of the speakers themselves on the feedback circuit are not considered. The effects are by no means negligible, the measurements carried out on a purely resistive load arealways very linear but they don't coincide with the real frequency response.

On the other hand, this response curve was measured on an inductive laod, that is, with its own loudspeakers.
The frequency response measurements were made with a sinusoidal generator and a Wandel & Goltermann WM – 20 level meter.
You can see the actual frequency response on the vobulator' screen. 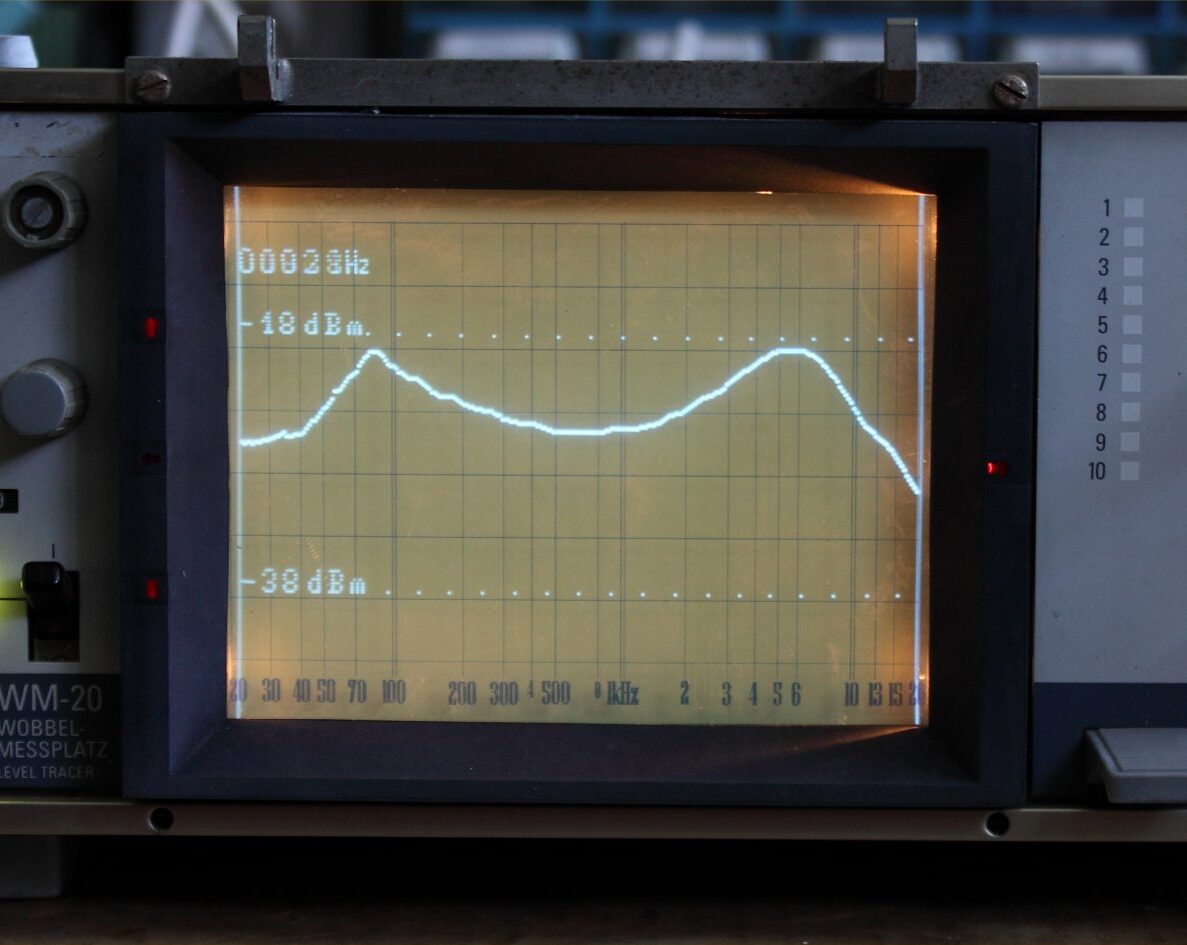 We consider as Maximum Power the square of the lower of the RMS voltages measured at the three sample frequencies divided by the load resistence.
The measurement conditions are the following:
- sample frequencies, 100, 1000, 10,000 Hz
- 8 ohm resistive load
- distortion less than or equal to 1%.
The measuring instrument provides the RMS value directly.

The measured RMS power is 7.4 W 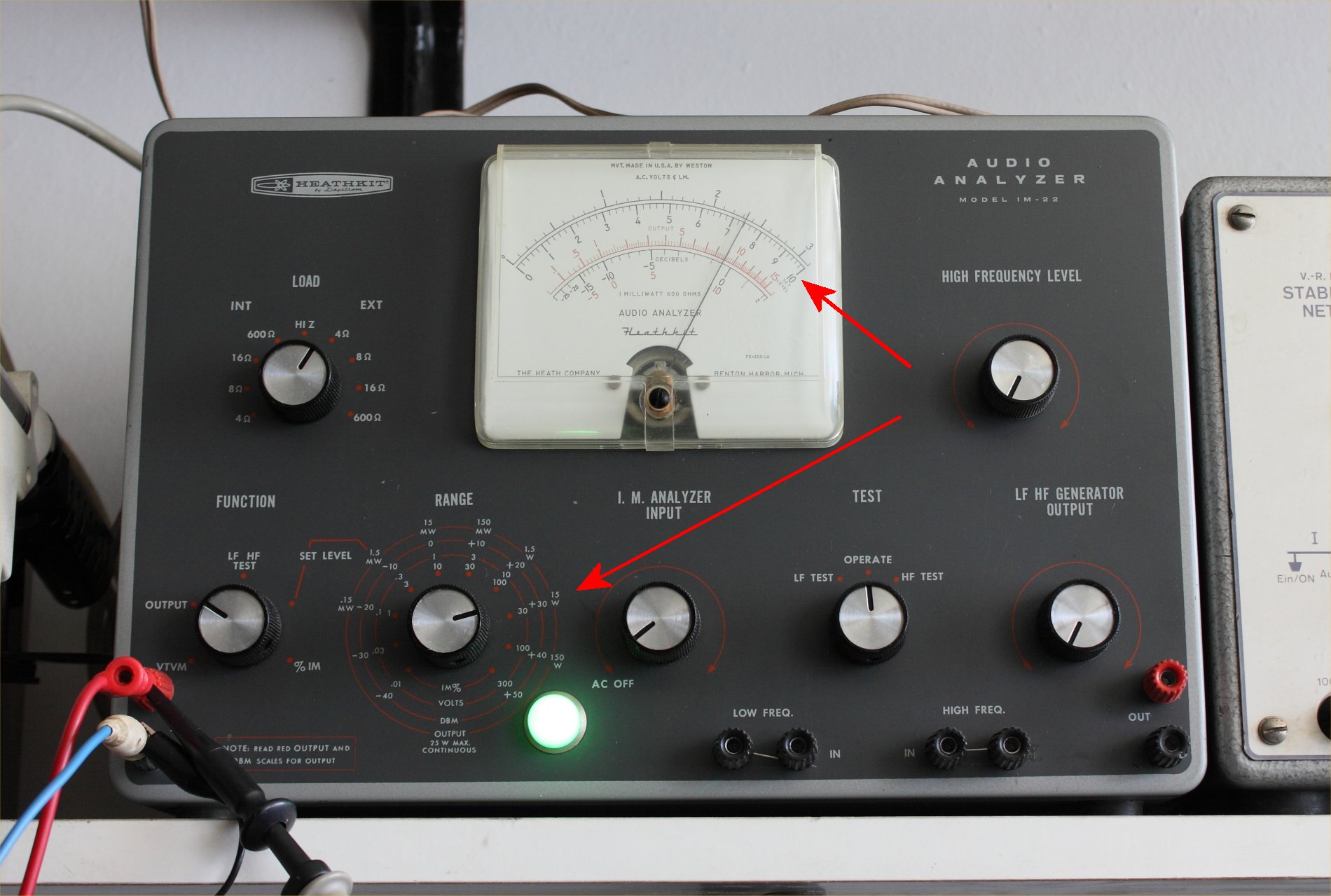 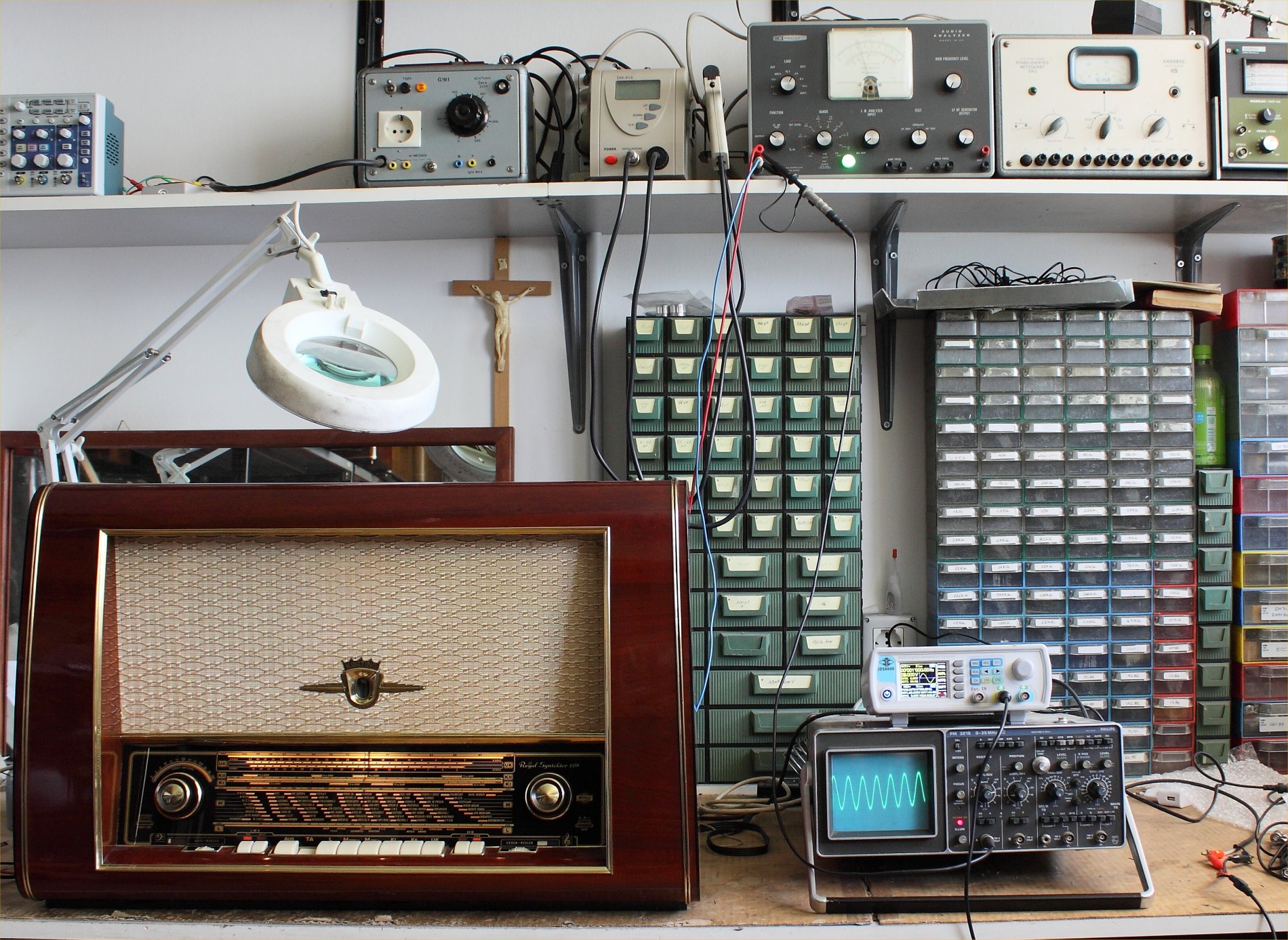 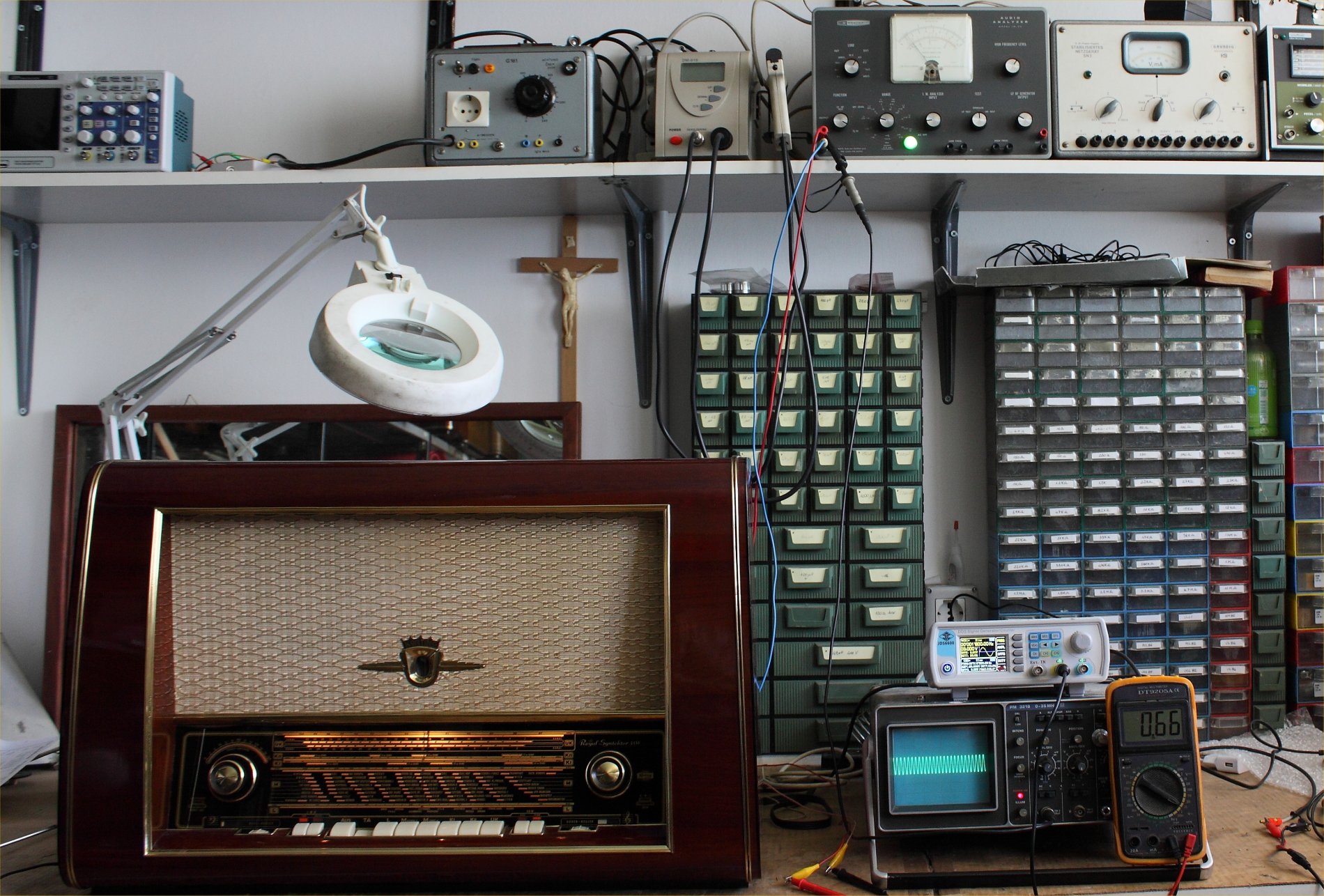 The Intermodulation Distortion % was measured with the SMPTE standard and measured at 1W RMS.
The two measurements were carried out by modulating the 50 Hz sine wave with a 1080 Hz sine wave and then with a 10400 Hz sine wave, with an amplitude in a ratio of 1/4 compared to the basic sinusoid.
The output voltage was kept around 2.83V on an 8 ohm carico.

The measured Intermodulation Distortion % (IM%) is 0.14%

The radio's loudspeakers are one of the most interesting and distintive features.

The first, as well as the biggest one, is an electromagnetic Isophon P23/25/105; its diameter is about 22 cm and with a 10500 Gauss magnet has a frequency response that goes from 65 to 10.000 Hz within +/- 3 dB.The whole frequency range is sent to this loudspeaker and the upper part is cut mechanically.The basses are always ready and extremely powerful. As anticipated power and dynamism are the main feature of this device.

The second loudspeaker is a 17 cm diameter broadband, with a medium cone's incline, very fast and which extens very high for a brilliant playing of mid-range sounds.The speaker is connected to an intermediate socket of the output transformer and the latter (the last one) acts as a filter and a power redicer at the speaker ends.

Finally, we talk about the excellent electrostatic tweeter, very large and efficient with a convex front surface that increases the diffusion area.A really well thought speakers' set, wisely implemented regardless of the price. 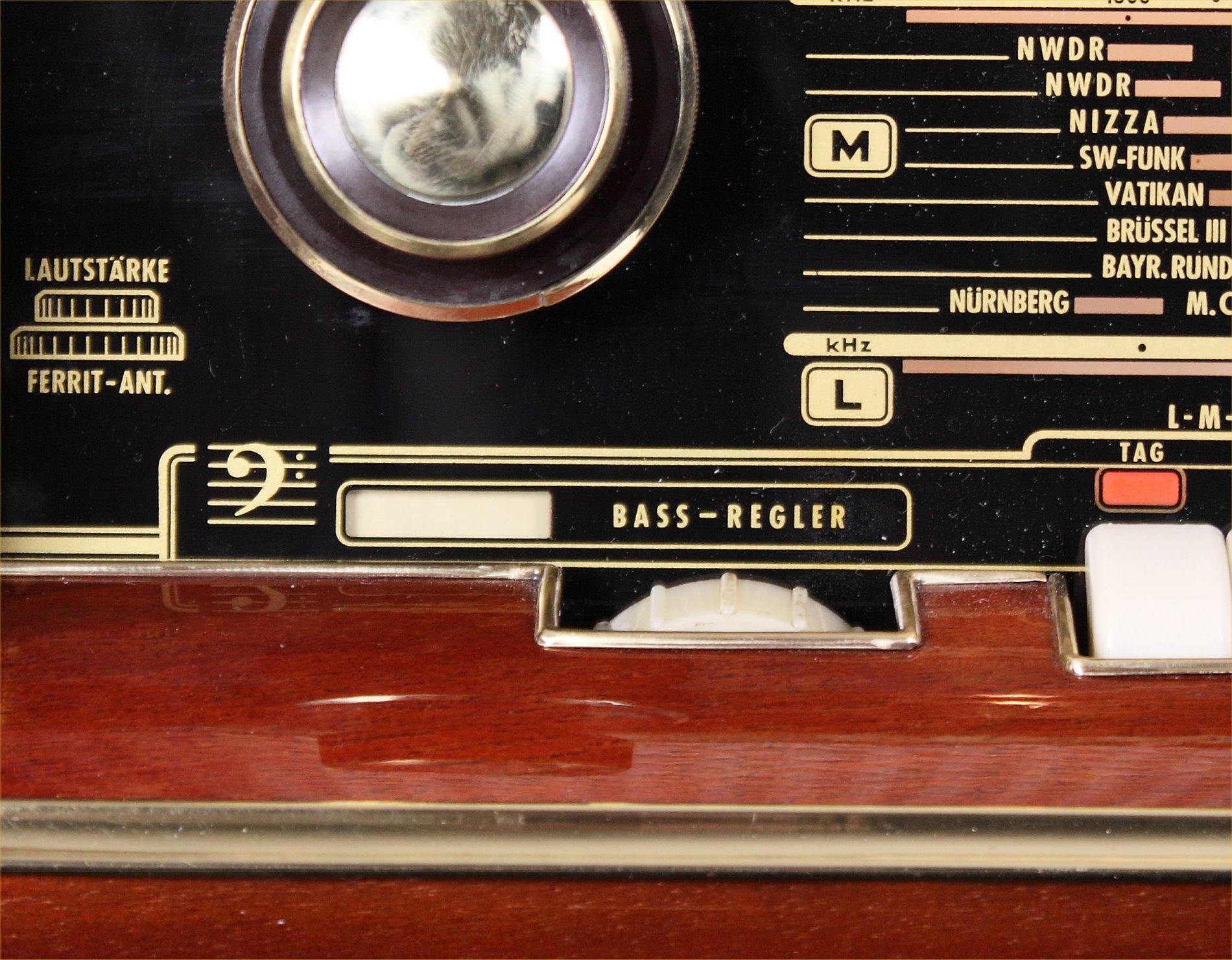 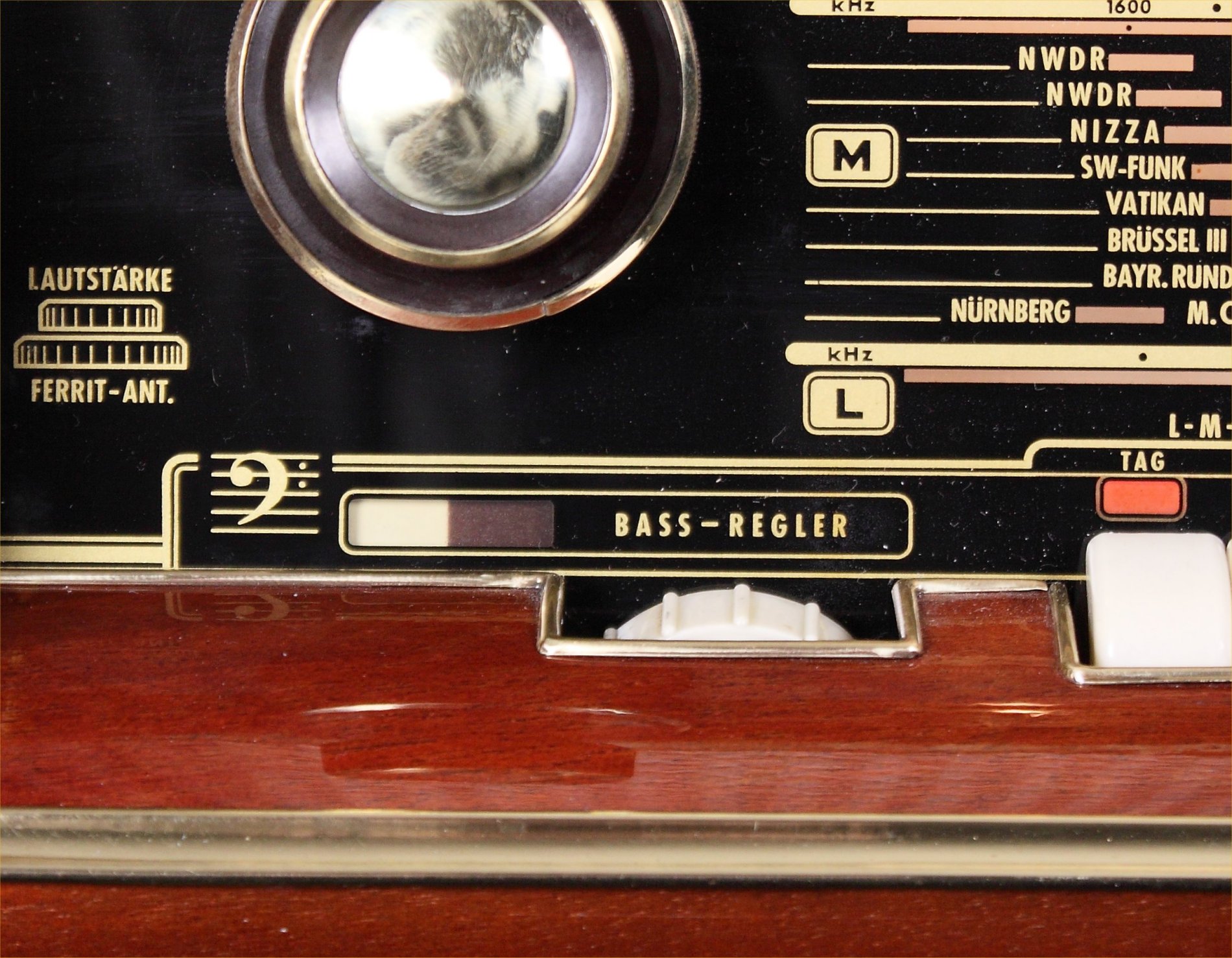 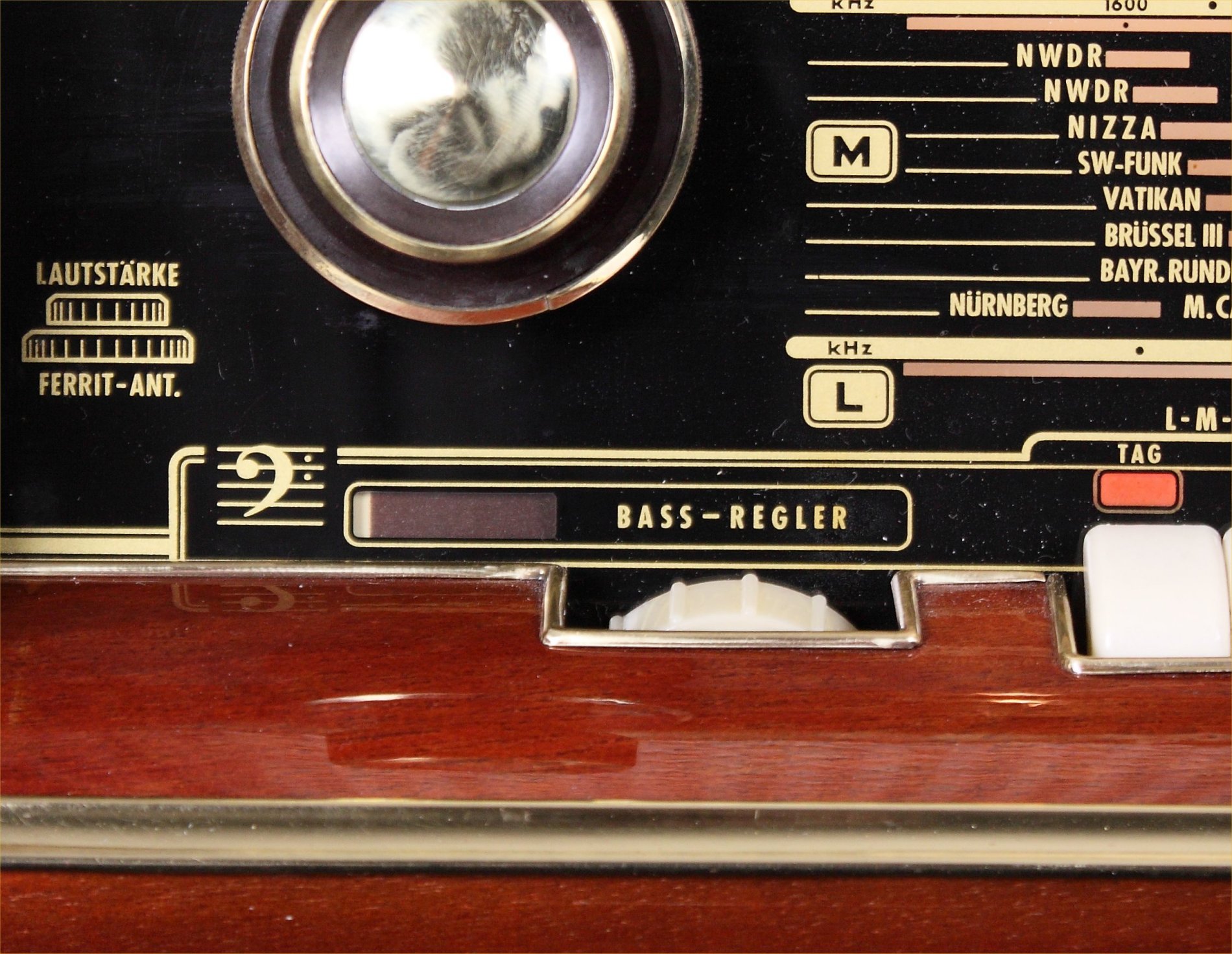 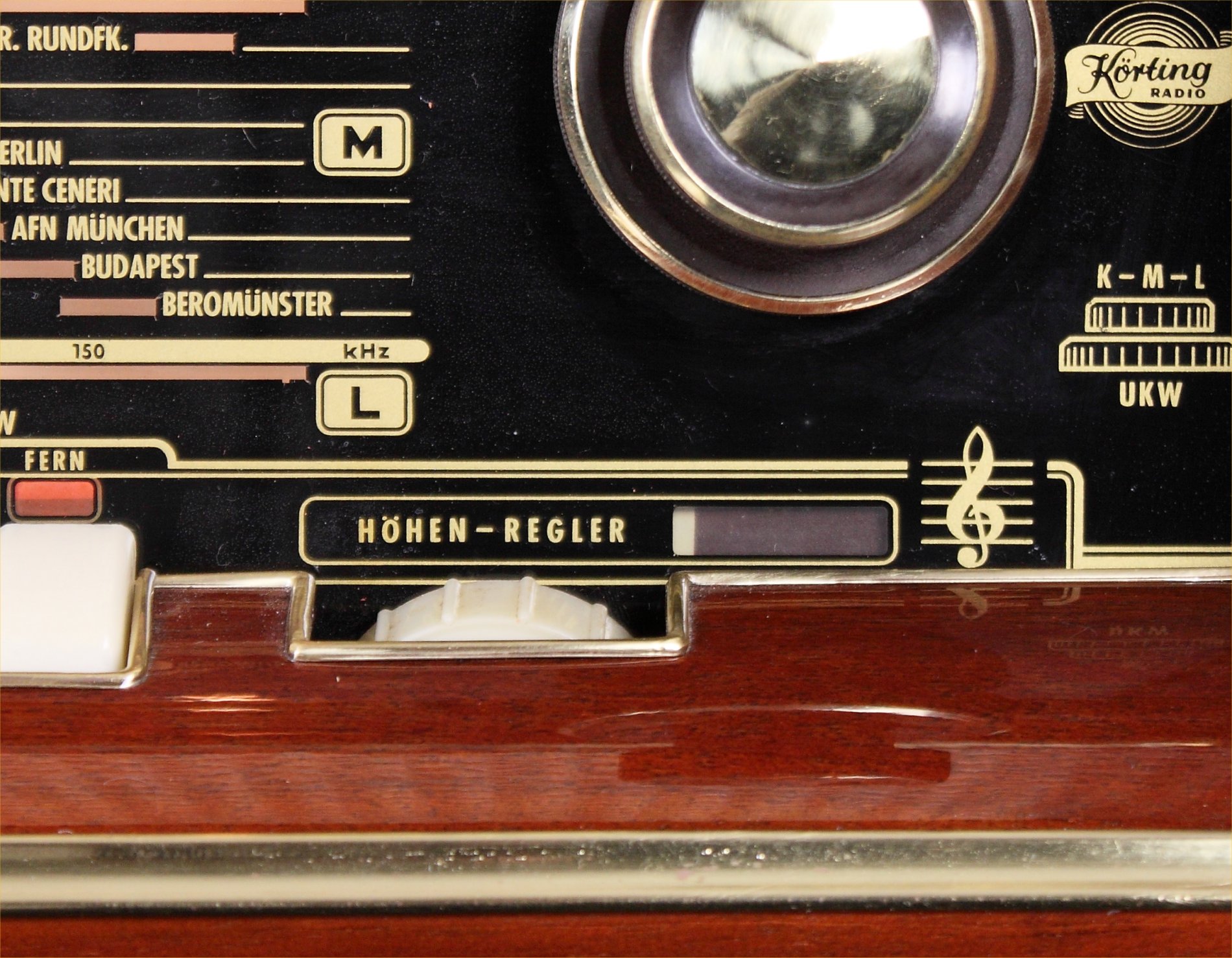 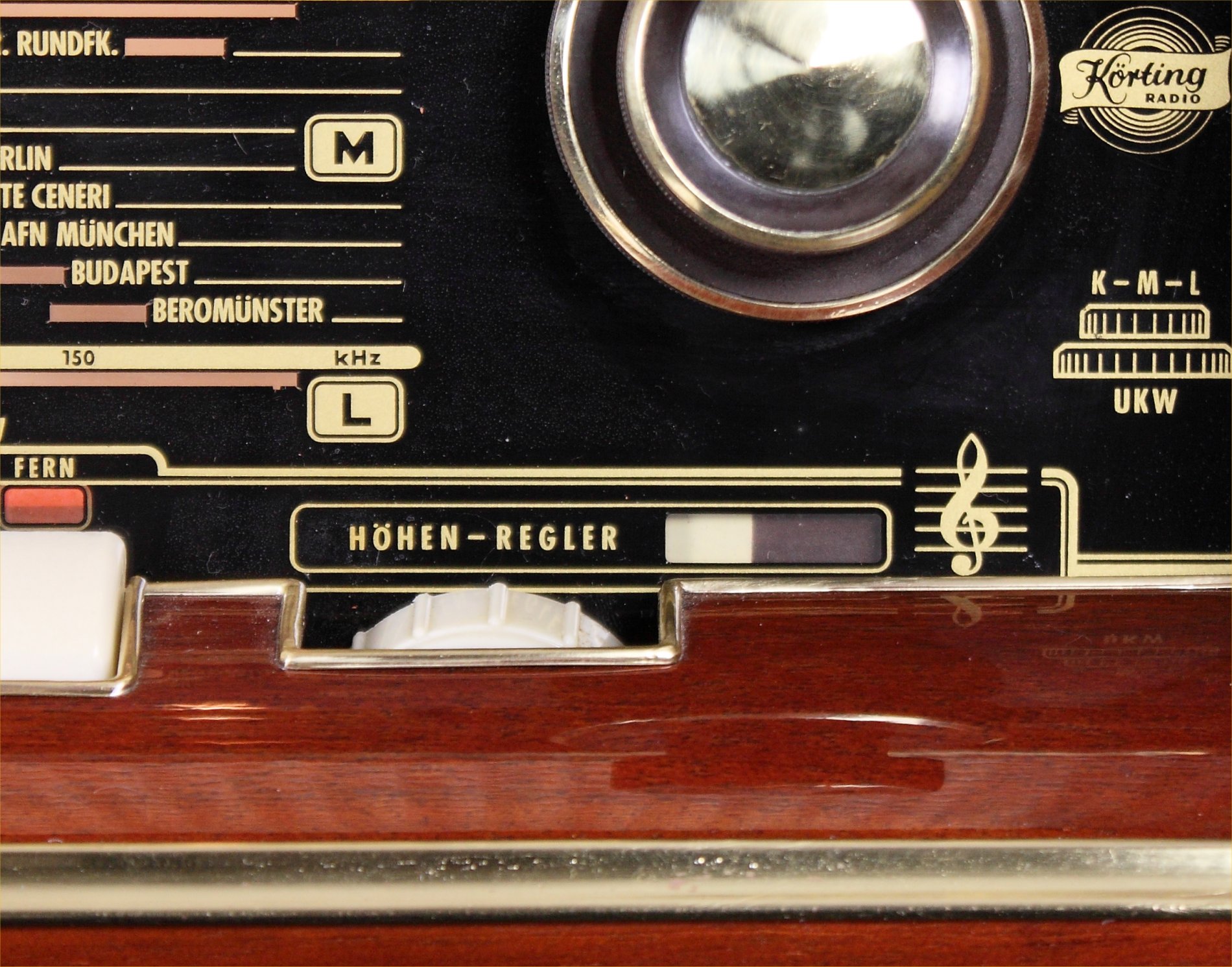 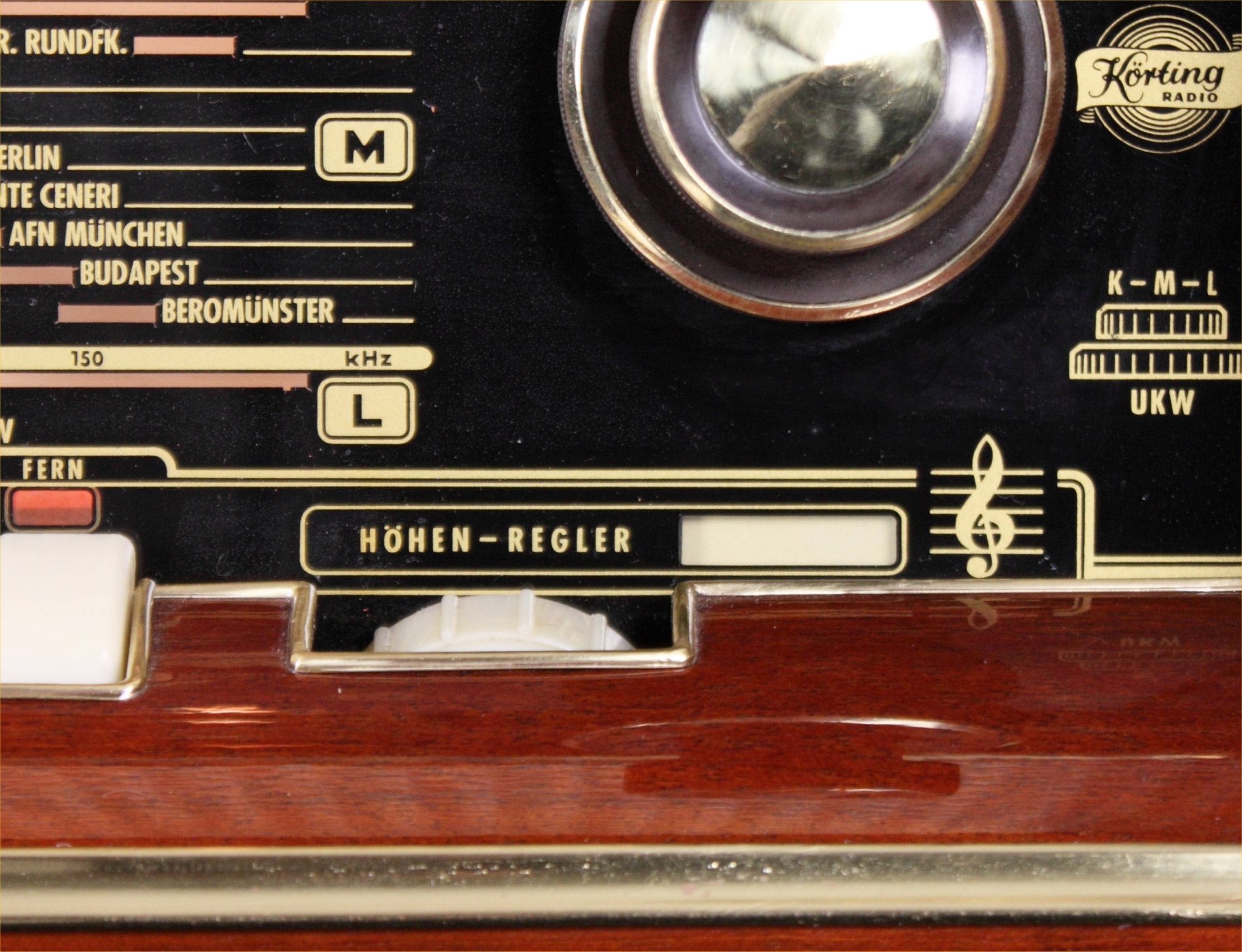 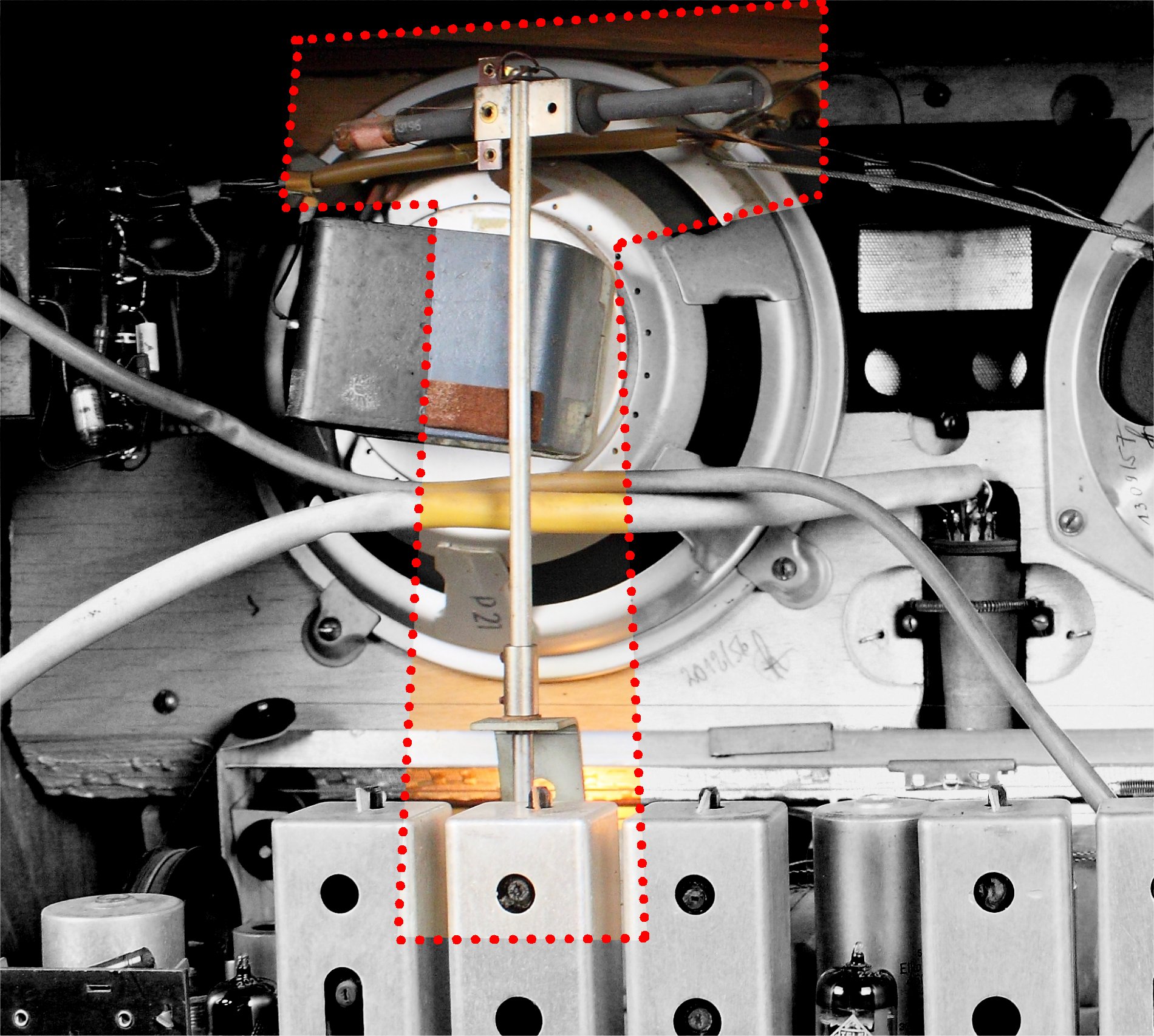 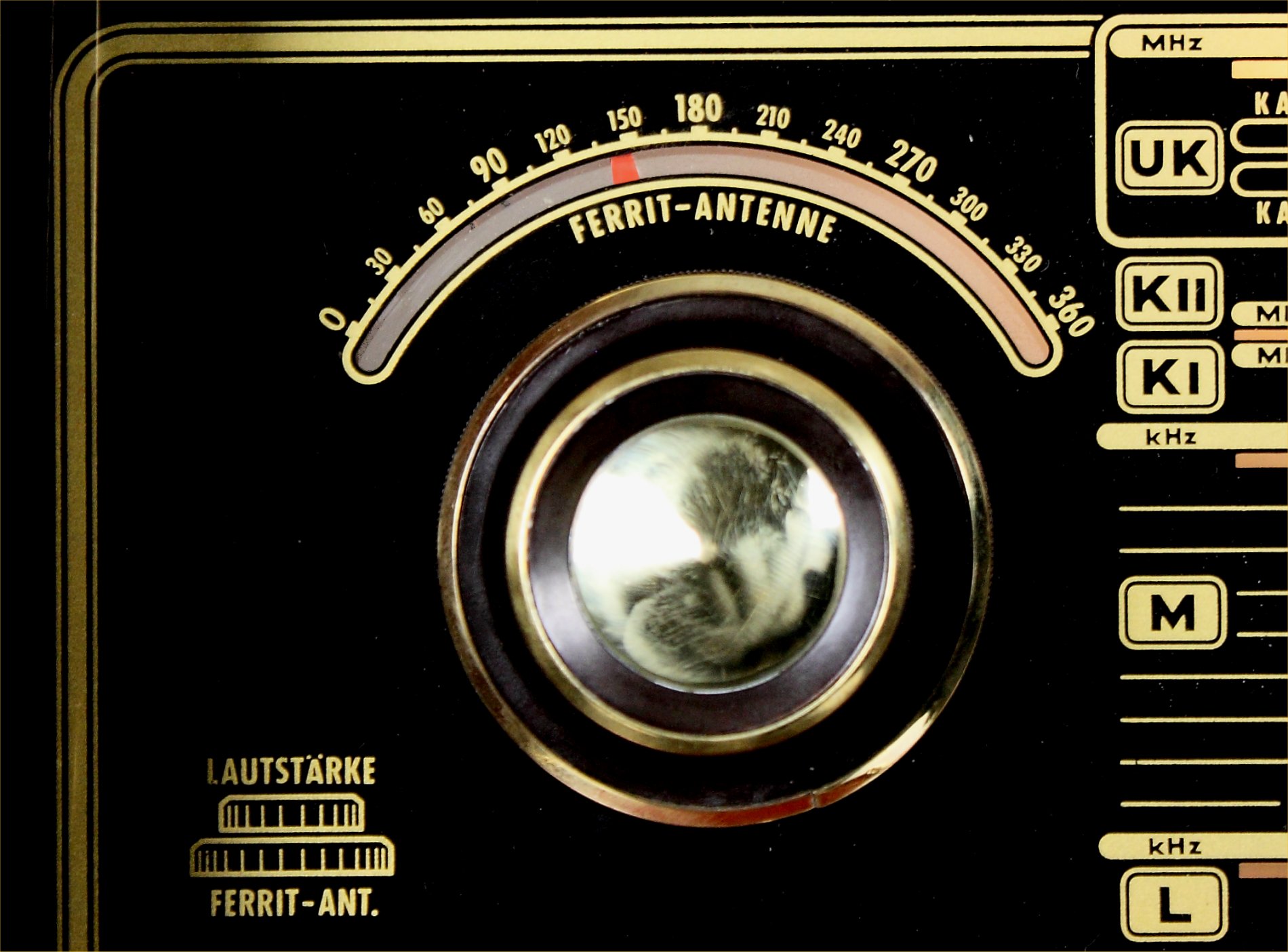 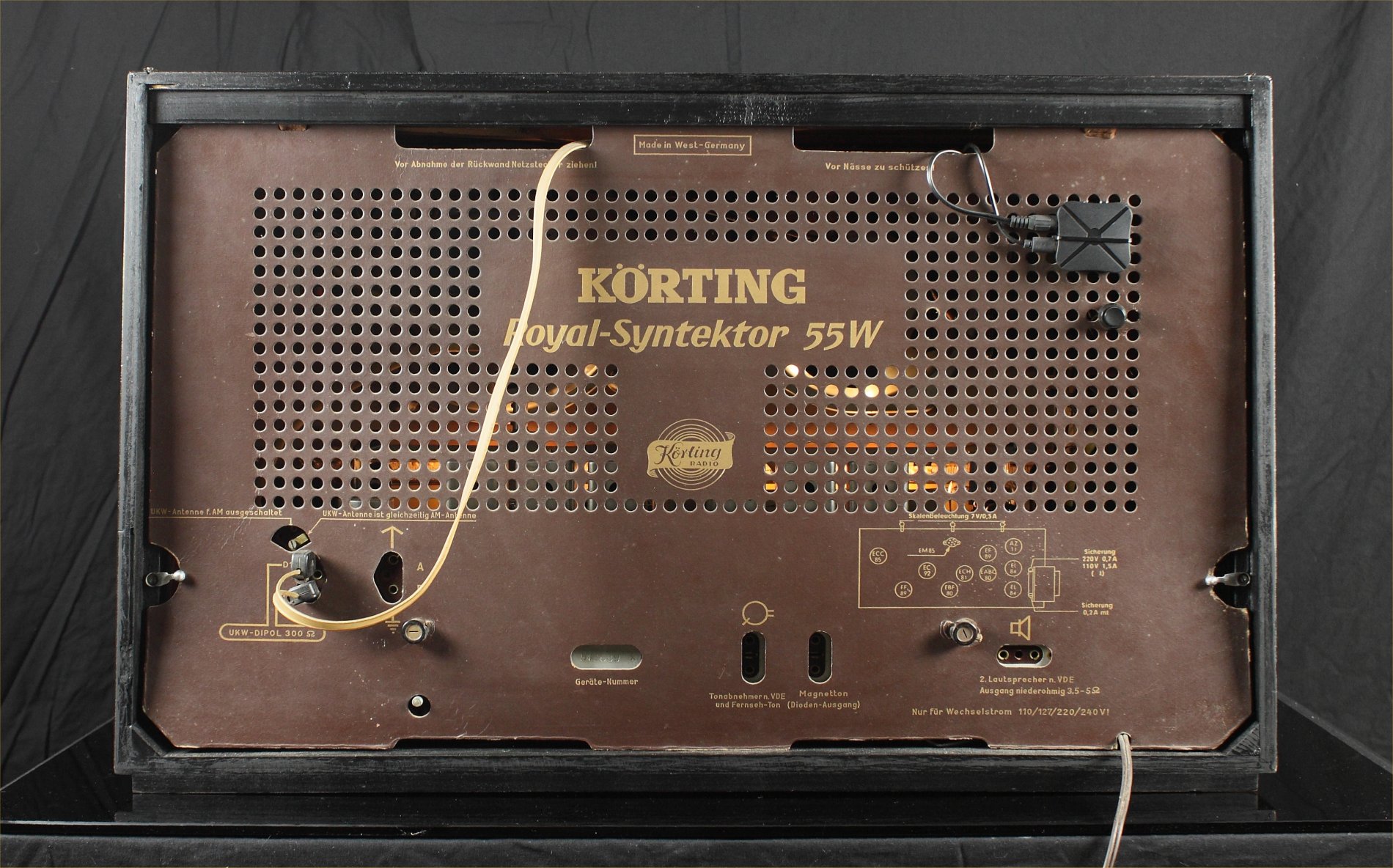 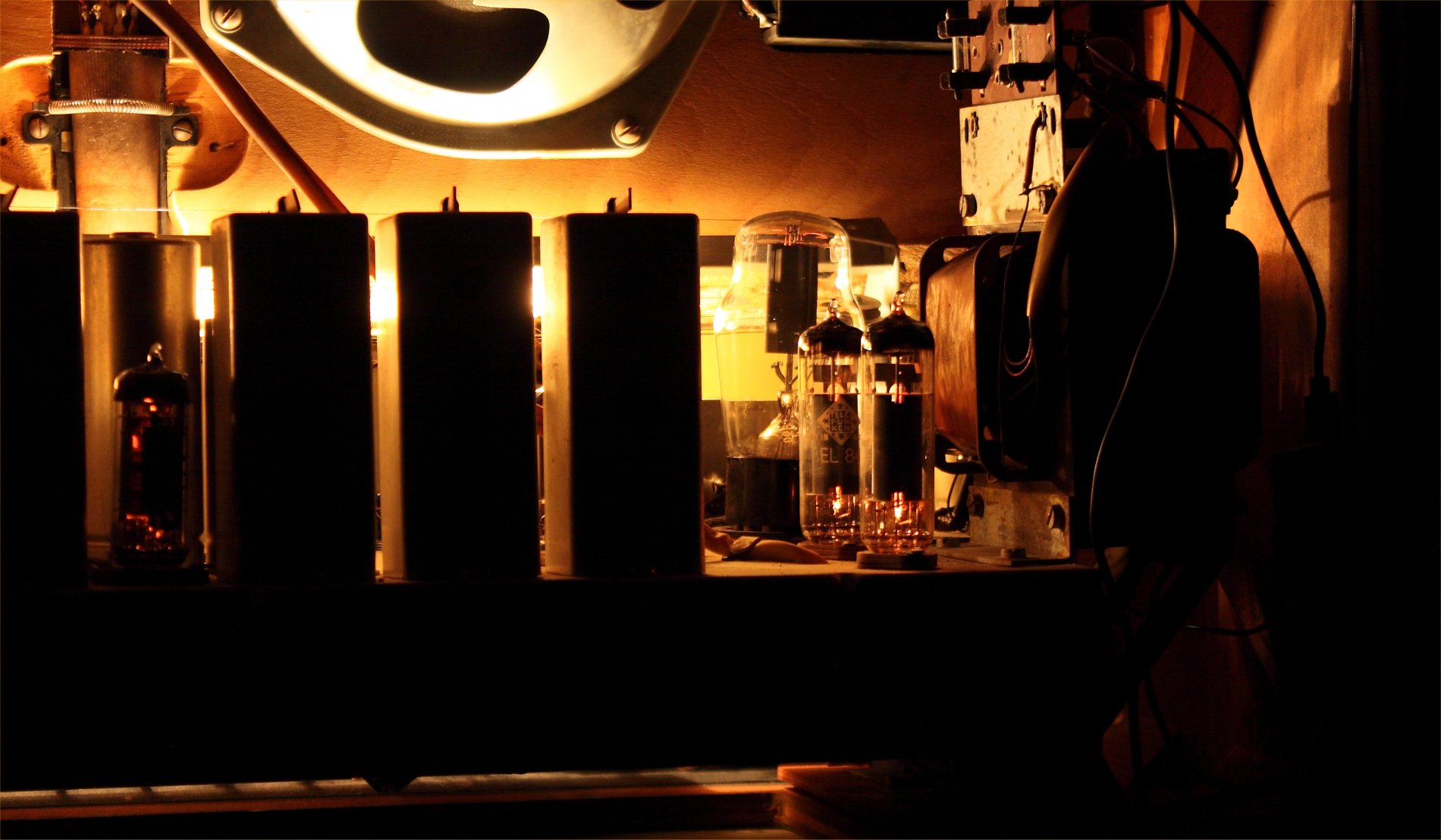