The Philips Saturn 653 / 4E / 3D is the second most important model of the house in 1955, and in the intentions of the manufacturer aspires to be one of the most popular models of all German production for the innovative technology used.

As a matter of fact, they met their goal and produced a unique piece of technology, for both the German and World Wide market.
It’s peculiarities are:

The Philips Saturn 653 / 4E / 3D has dimensions in line with the top models, but it’s woodwork, frames, and speaker covers contribute in giving it a much sleeker, eye-pleasing look to complete any furniture display.
The Low frequencies are particularly deep thanks to the separated OTL amplifiers and to the impressive size of the subwoofer, approximately 21cm in diameter (more or less 8.3 inches).
Exactly the same as for the Capella 753/4E/3D model I suggest making good use of the mid-tweeter, as this successfully crafted speaker (17 cm in diameter) makes the mid and Hi frequencies pleasant and true to life, especially if seated in front of the Machine.

High and Mid Frequencies sections
The FM group is of the variable permeability type. It has a high amplification and stability.
Being equipped with an automatic noise suppressor in the presence of signals below 1.7 V, the output is muted to avoid hearing rustling and noise when searching for stations.
The de-emphasis circuit is set to 50 uS, valid all over the world except for the USA and South Korea. In these countries, the filter should be increased to 75 uS.
The AM section is equipped with a rotating antenna for the OM and OL bands. The antenna can be controlled by a knob on the front.
The mid-frequency sections are composed of three separate filters for AM and FM. The first of these filters is adjustable. The second is the amplifier filter and the third filter further increases the selectivity of the device.

All the listed solutions translate into a very low distortion, an increase in power, and a pleasantness of use hardly ever obtained in other appliances.
This is the Philips Saturn 653/4E/3D 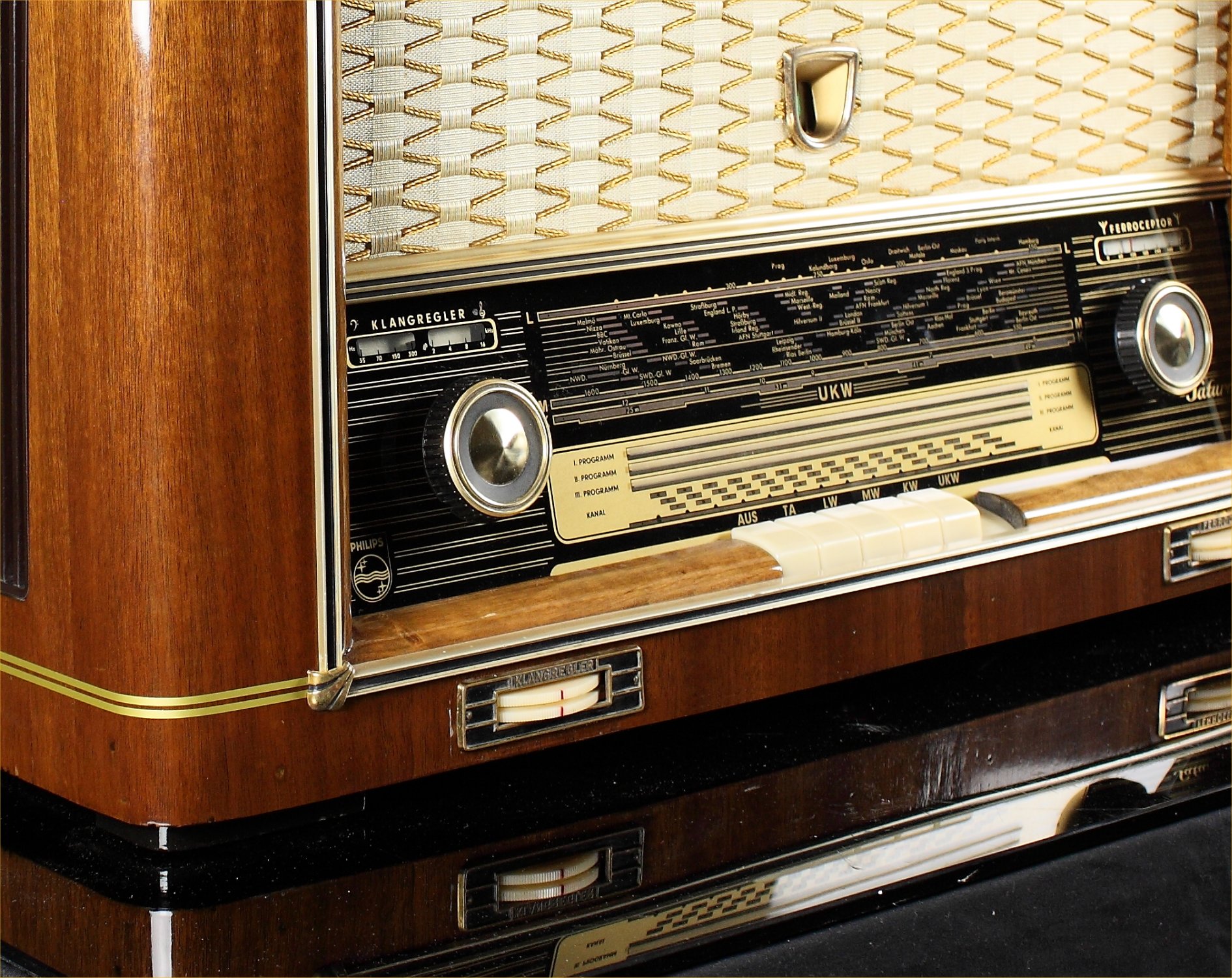 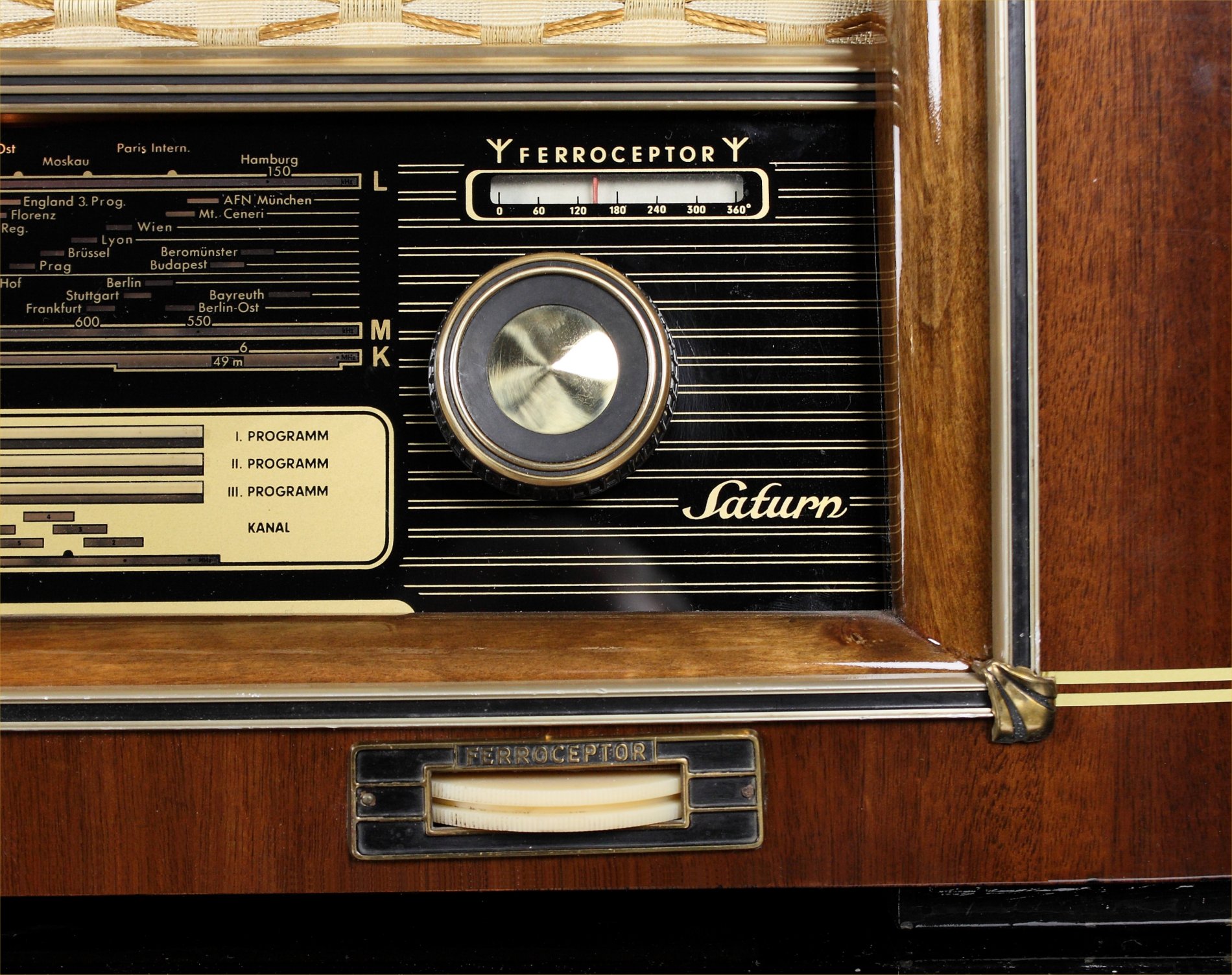 In 1891, the brothers Gerard and Anton Philips, started to produce the first incandescent bulbs in Eindhoven.
Later, Philips specialized in the production of electro- medical equipment, and in 1918 introduced the first X-ray tube.
In the following years, Philips began specializing in the broadcasting industry. In 1932 the company succeeded in selling over one million radio equipment and became the world’s first producer.
During the Second World War, Philips transferred to the Netherlands Antilles, and returned to the Netherlands at the end of the conflict.
In 1958 Philips was the only multinational to have a pavilion dedicated to the Expo in 1958 known as Le Poème Electronique.
In the second post- war period, began the production of the first televisions, then the launch of the music cassettes in 1963 and the production of the first integrated circuit in 1965.
In 1982 Philips launched with Sony the first compact disc player.
In 1984 Philips acquired the control of the German Grundig.
In the 90's Philips faced a financial crisis.
In 1991 it inserted on the market the Video CD and it is one of the first companies in the world to develop high definition television.
In 1999 Philips established a joint venture with LG Electronics, named LG Display, which ends in 2009.
In 2006 together with Sony launched the first Blu-ray.
In 2009 Phillips launched the first full-HD LCD TV in 21:9 format.
Phillips holds 48,000 registered patents.
Currently, the production is focused on low- energy lighting products and LED systems and services for diagnostics and production of medical devices. 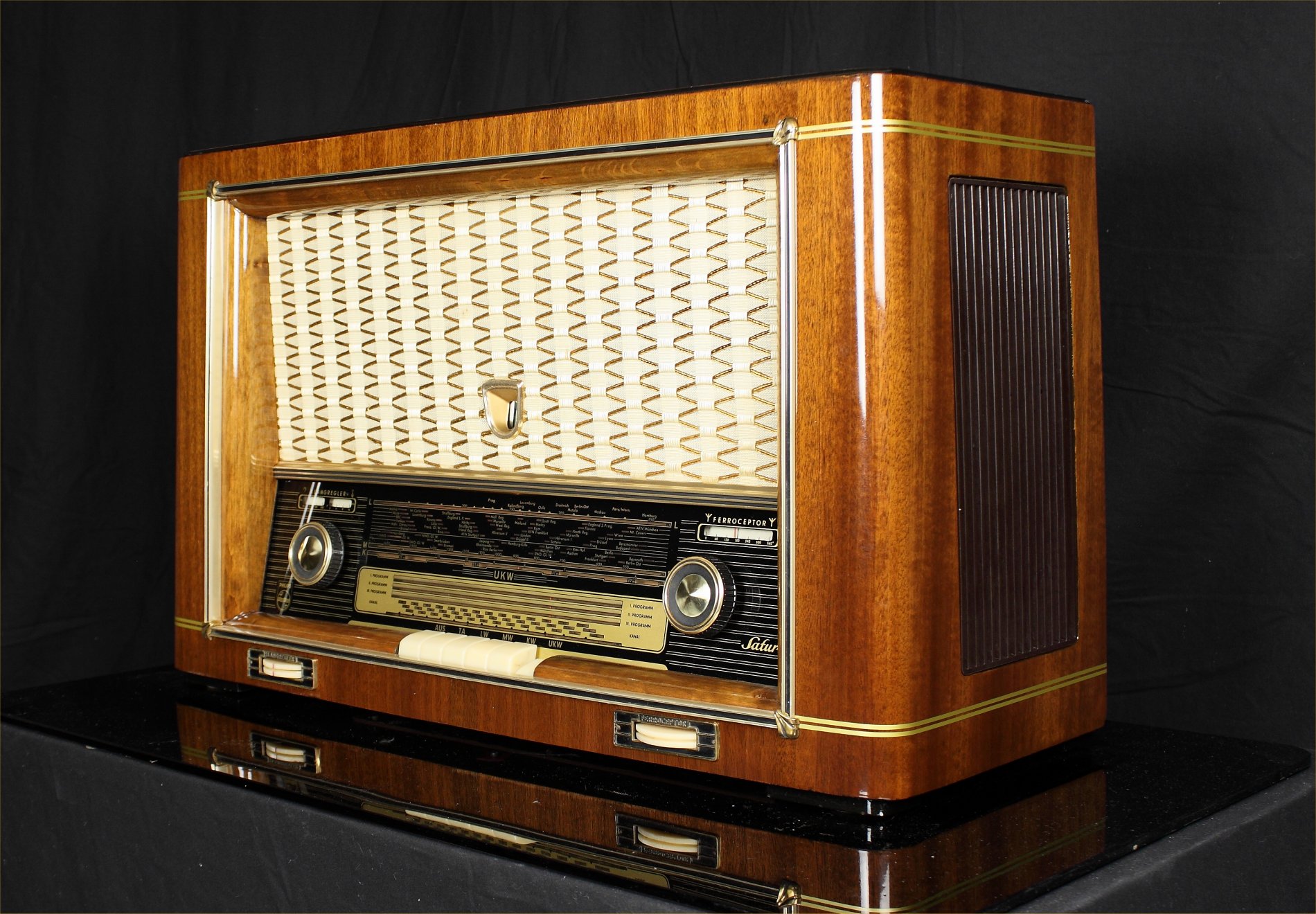 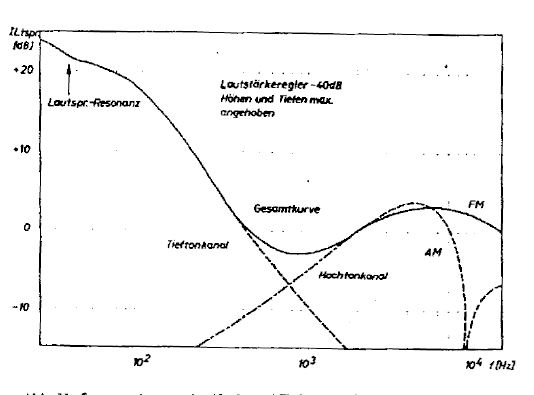 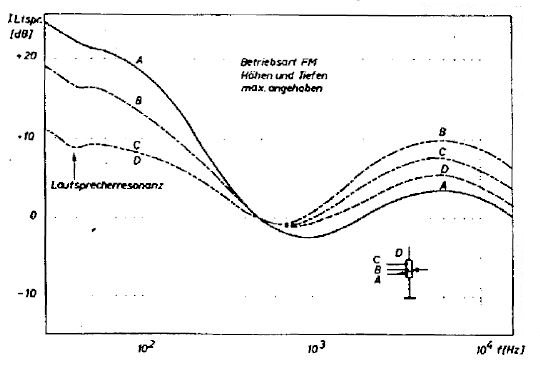 The preamplifier consists of two stages. At the entrance, the volume potentiometer is equipped with three sockets for physiological correction (loudness). The intervention curves are visible in the first graph.
Philips considers the frequency of 800 Hz to be the center of the audible band, so the treble and bass controls are calculated to enhance the frequencies above and below that value. The choice of this frequency is very important for the musicality and the pleasantness perceived by listening to the device.
In the second graph the frequency response of the preamplifier, with the tones enhanced to the maximum. You notice the different equalization you get by listening to the AM bands (Long Waves, Medium, Short) or listening to the FM band and PHONO.

The final stages are two distinct, one for the low frequencies and one for the high frequencies. These amplifiers control separate speakers, a 26 cm woofer for the bass and three speakers for mid/high frequency, with the 17 cm front speaker disconnectable for 3D effect.
The most interesting feature of these final stages is that they are without an output transformer.

The feature that makes this device very interesting is that each final stage uses a pair of EL84 / UL41 in an ironless configuration, ie without an output transformer (the known critical point of the final stage).
The output stage uses the operating principle called Shunt Regulated Push-Pull (SRPP) used today in HIGH-END amplifiers.
The output transformer limits the bandwidth of the entire amplifier. The bass is limited by the inductance of the primary winding, the treble is limited by the parasitic capacitance resulting from the alternation of the primary and secondary windings. The alternating winding of the primary and the secondary windings is also necessary to improve the coupling and thus reduce the dispersed flow.
The reduction of the dispersed flow increases the damping. This is essential in the loudspeakers mounted inside the cabinet of the radios, which do not work in hermetically closed boxes, and which are therefore free to move almost without resistance from the surrounding air.

The two output tubes (EL84, UL41) of each channel, four final valves in total, are connected in series with DC-DC coupling. Each UL41 is configured as a triode.
The output is taken from the cathode of the UL41. The speaker has an impedance of 800 ohms, identical to the average impedance that occurs on the catode, whereby direct coupling (without transformer) is possible between the final stage and the loudspeaker.
The Philips Saturn 653 is therefore totally free of all the problems deriving from the output transformers.

The damping of the loudspeakers is kept high by the low dynamic resistance of the feedback loop.

The tones control system is very efficient.
Above the large tone control knobs there is two bands that lights up gradually indicating the emphasis on the band on which it acts.
The high-tone control knob is linked to two thin ropes. One of them is for the position indicator of the control itself, whereas the other changes the position of the ferrite in the MF transformers modifying the its curve.
By doing so high tones were attenuated/accentuated even before getting to the BF stage. 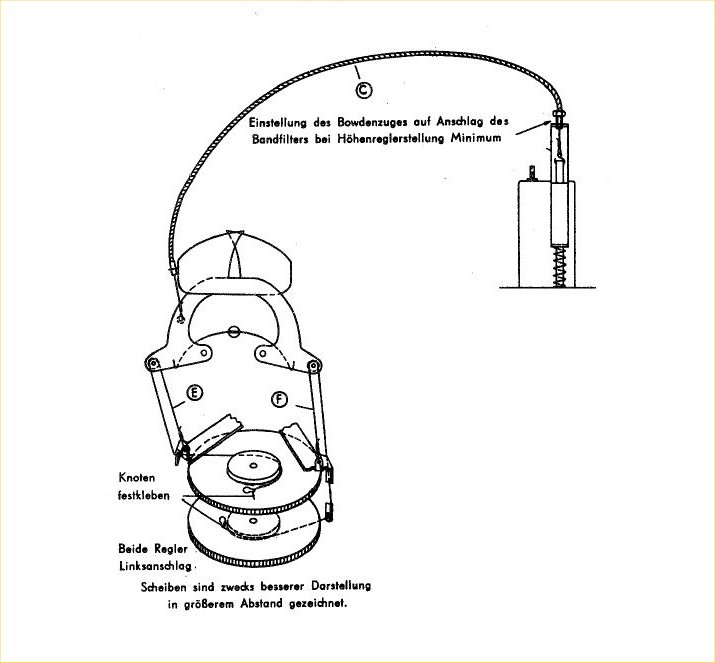 Bass at max - Treble at max

Bass at min - Treble at max

Bass at max - Treble at min

Bass at min - Treble at min

Inside the cabinet there is a dipole for FM reception and a ferrite rotating aerial for AM reception.
Ferrite aerial can be rotated from the outside to achieve a perfect tuning of the device in the AM.
In this picture see the rotation mechanism and the position indicator of the aerial.
The reception sensitivity with internal aerials is very good.
Using an external aerial sensitivity is further increased.

The 21 cm loudspeaker, with a 23 mm diameter magnetic core, is placed at the front.
A front 17 cm mid-tweeter can also be switched off if you want to increase the 3D effect.
On the two sides, there are two elliptical tweeters pointing upwards. Radiating to the ceiling of the room to take advantage of the reflections of the environment that add to the direct radiation produce an expansion of the soundstage.
There are no dangers of stationary wave due to the working frequency of these speakers.

In the center of the speaker panel is the Magic Eye which indicates the perfect tuning of each station.
KLANGREGLER - Low Tone Indicator (FA Key) and High Tone Indicator (SOL Key).
Just below we find the large Volume knob, with built-in automatic loudness correction.
FERROCEPTOR - Indicator of the position of the internal ferrite antenna. This internal antenna (excludable with the HA key) is used in the OM and OL bands. The internal antenna must be rotated until the best tuning is achieved.
Just below we find the large knob of the Manual Tuning, whose movement is very pleasant being supported by a large flywheel 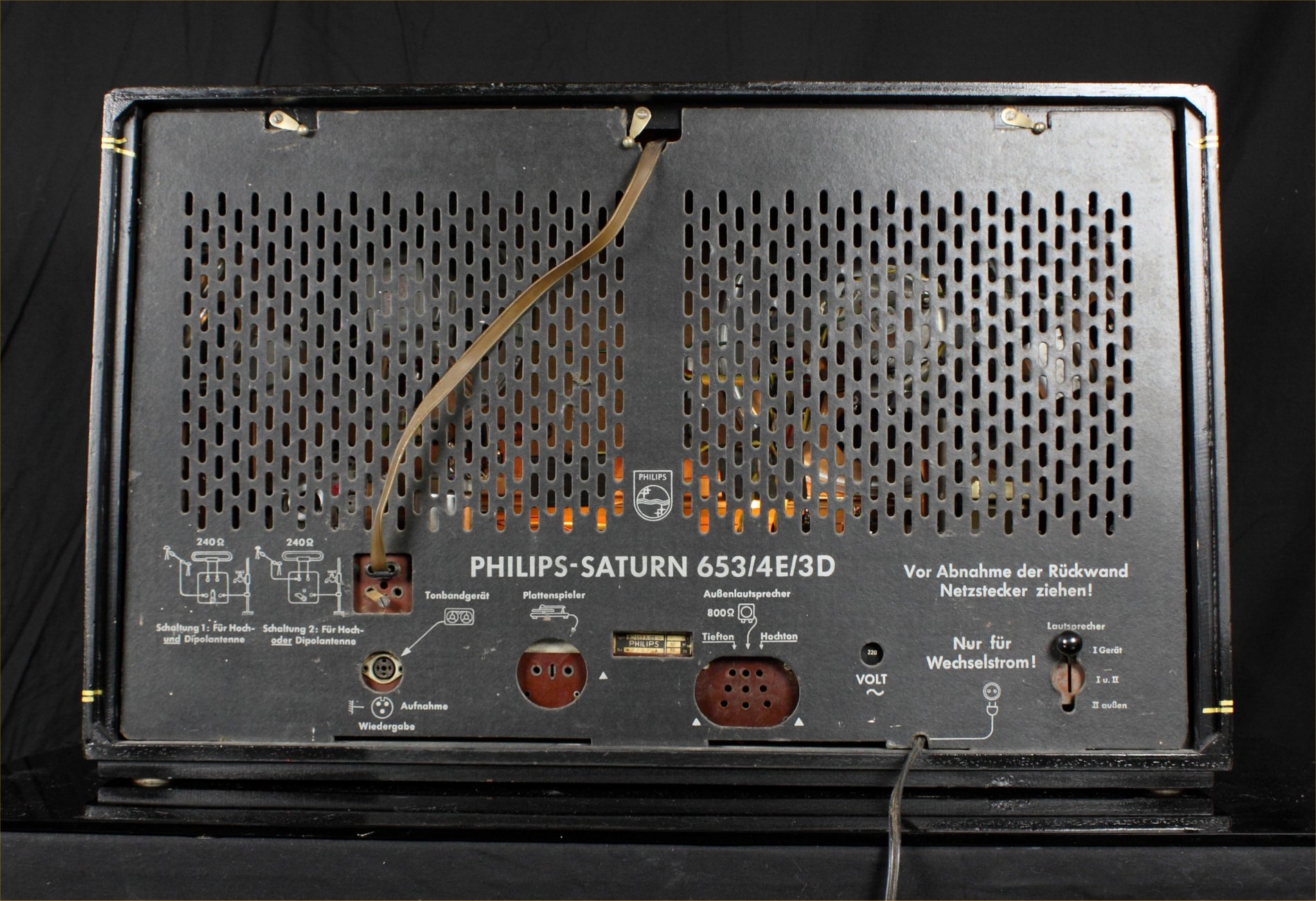 Be careful: Use ONLY 800 ohm loudspeakers 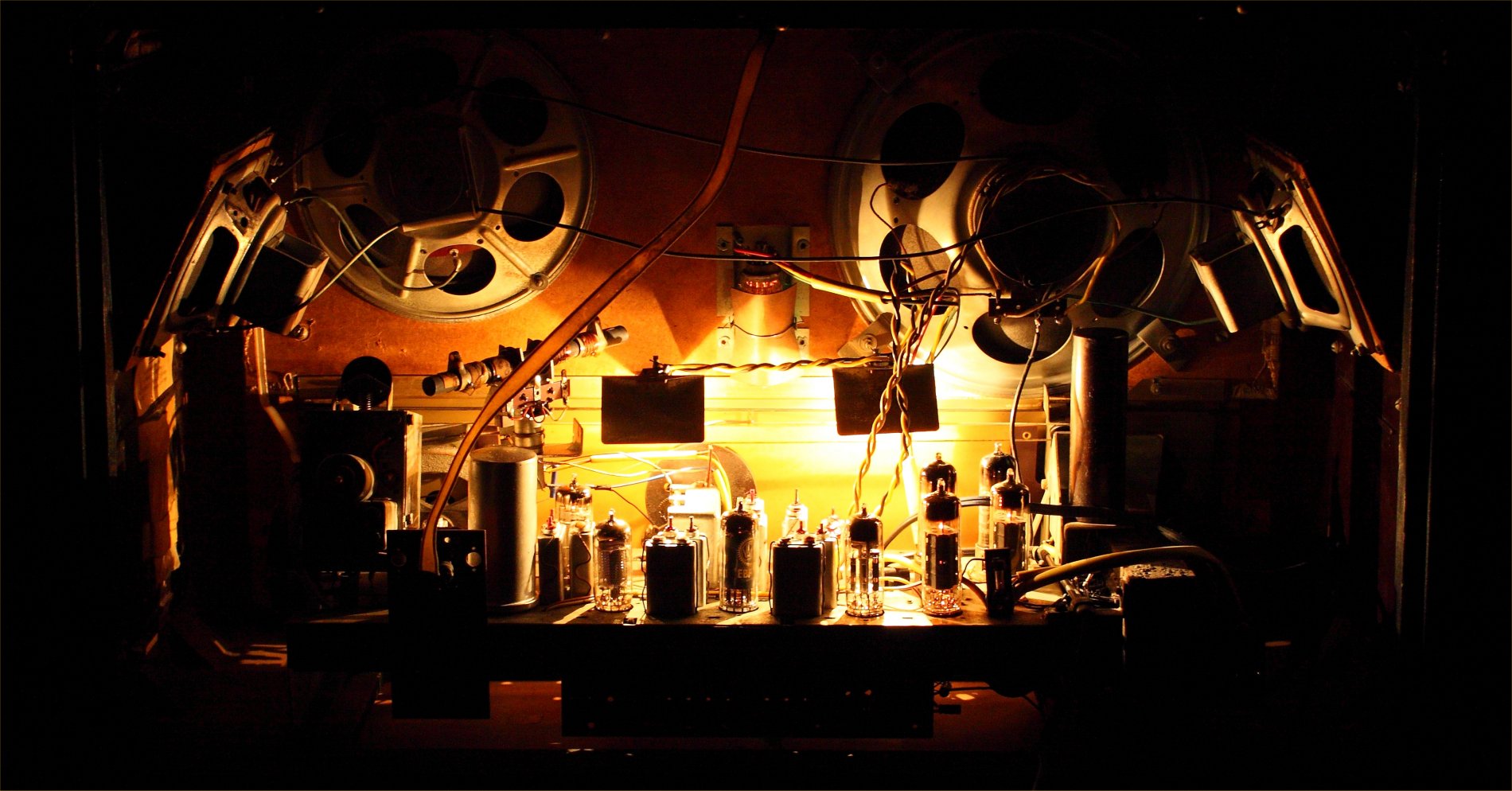 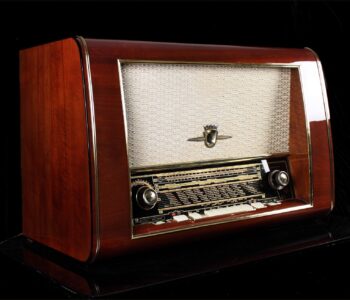 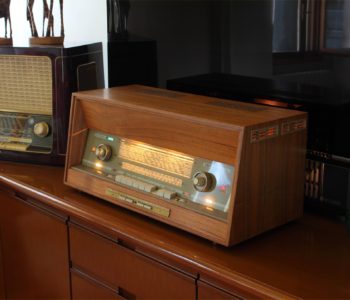 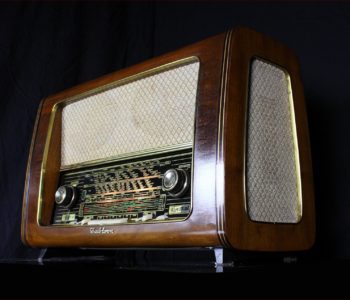 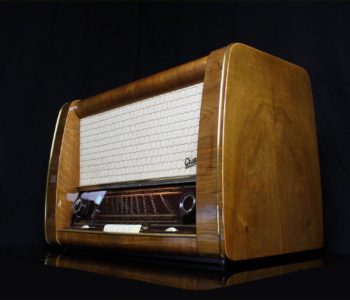 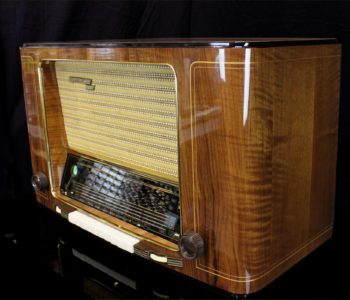 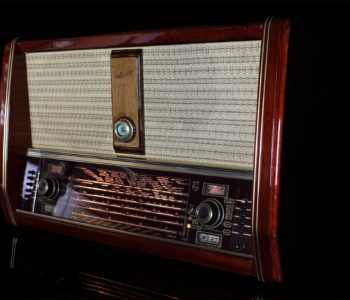 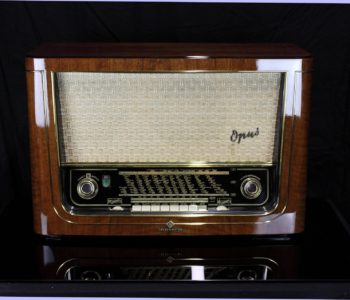 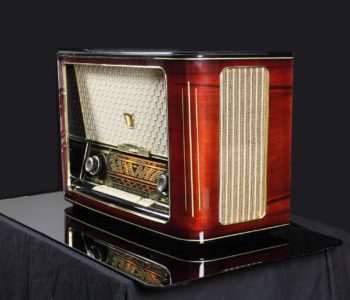 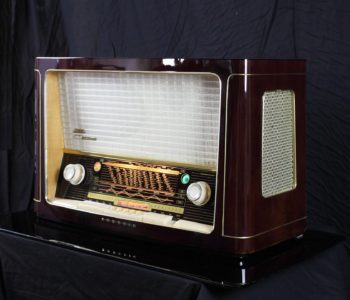 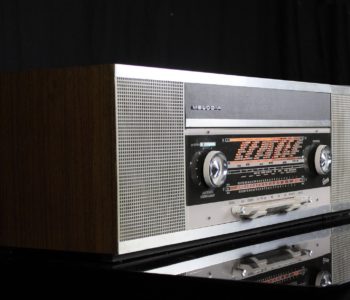