The most striking feature of the Radiomarelli 9A55 is its unmistakable aesthetic personality.
This beautiful line, with the control console inclined and directed towards the listener, and the loudspeakers panel embellished by harmoniously worked strips is the evolution of the model 8A05.
This line is found, with some changes, also on the 9A26 model which replaces the 8A28, also called “Federale”.

1945, the war is over and Marelli, like many other companies, resumes its civil activity. Radiomarelli presents the 9A55 model and it is a success.
The line is beautiful, the cabinet is in real wood, the front is curved, the control console is directed towards the listener. There is everything, and everything is in the right place.
The control panel, later analyzed, are simple, practical and effective.
The devices of the same class from other brands have a much more traditional and unattractive line. The differences between one and another are often little details, some ornaments, the canvas of the loudspeakers, the slightly different shape.
The 9A55 is a revolution. It is both really liked and not entirely liked.
It is the destiny of all the devices with a strong personality.

The Power Output stage consists of a 6V6 in class A. The 6v6 is a very popular beam-power tetrode used in “made in USA” amplifiers.
The beam-power tetrode was invented to bypass the patent pending on the pentode. The polarization is slightly different but the sonic characteristics is comparable, and for some even better, to the pentode EL84. It is an extremely robust valve, thanks also to the physical dimensions that guarantee an excellent heat dissipation.
The Power Output stage is provided with a negative feedback circuit which has a triple function:
- reduces the harmonic distortion
- regularizes the linearity of the  frequency response
- allows three different signal equalization curves

The High and Intermediate Frequency stages follow a very simple classical scheme, from a modern perspective.  A 6K7 is used in the Intermediate Frequency stage and a 6A8 in the oscillator/mixer High Frequencies stage.
Sensitivity is not high, so a good aerial and possibly a a good ground are required.
In Italy still remain very few stations that broadcast in Medium Waves, so the use of bluetooth input is very recommended, almost mandatory.

Using the bluetooth input the sound is very pleasant. The bass are well present, reinforced by the robust cabinet. Probably the rounded walls avoid the formation of stationary waves and resonances, contributing decisively to the good final result.
The device was designed to listen to stations in Amplitude Modulation, which provided a frequency response of the audio signal at most up to 4500 Hz. With the use of bluetooth this limitation would have been too invalidating, which is why the the original electrodynamic speaker has been replaced with an excellent Isophon wideband magnetodynamic loudpeaker whose frequency response is very extended.
The result is that the Mid is very present and the treble are present and sweet, slightly in the background.

In short, an enjoyable device with an exclusive line that, unfortunately, represents another piece of glorious Italian history that has gone away. 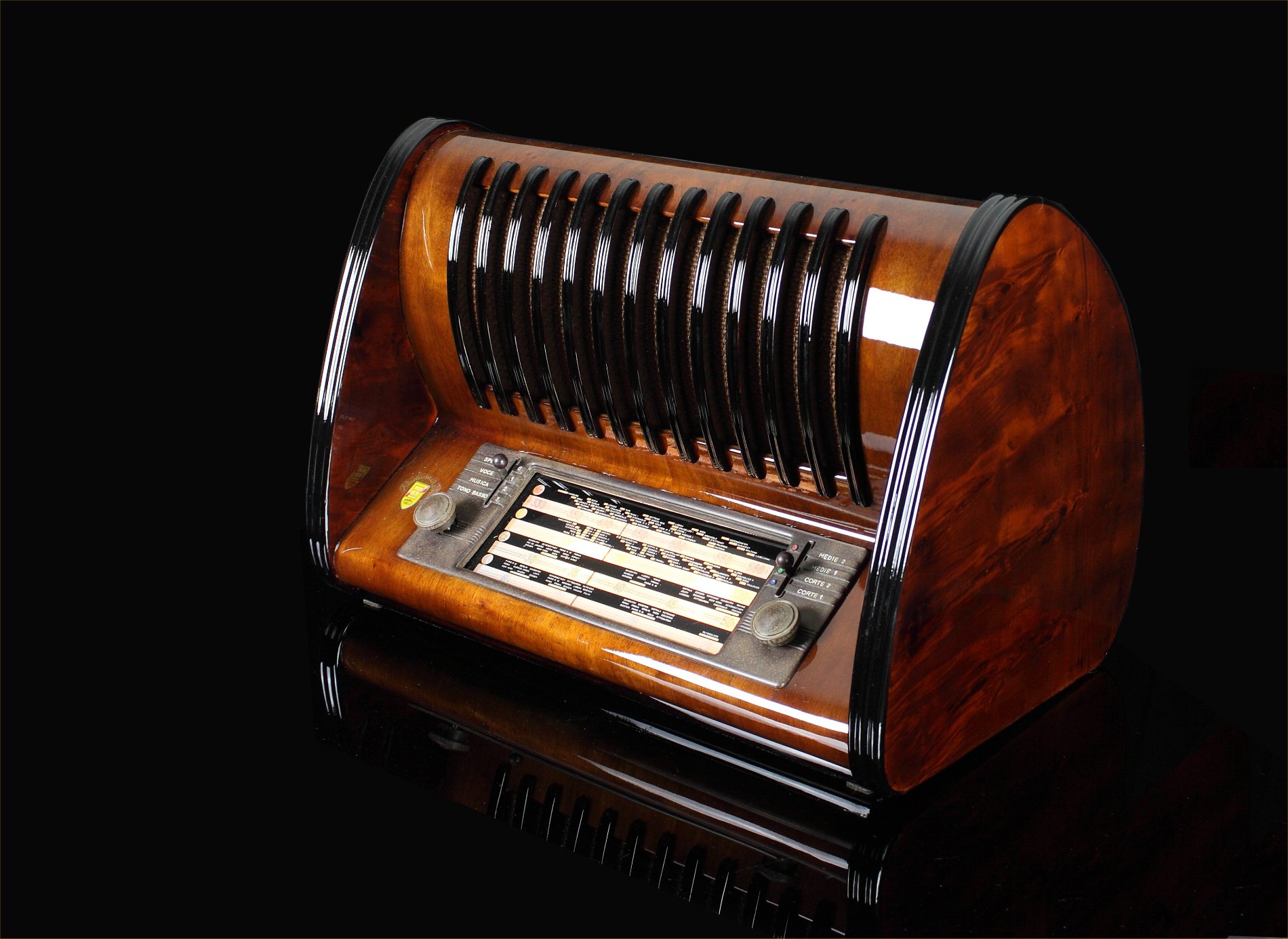 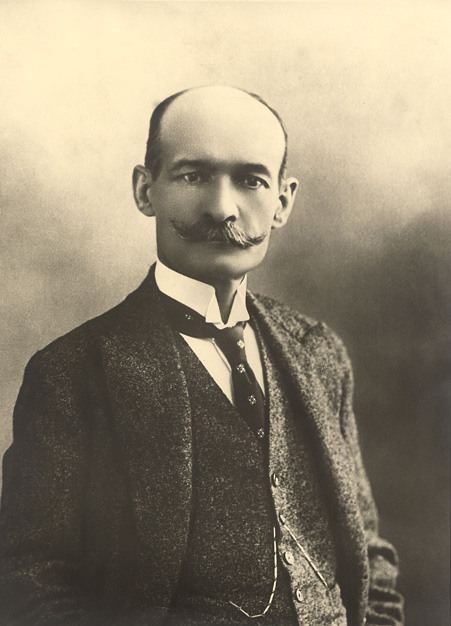 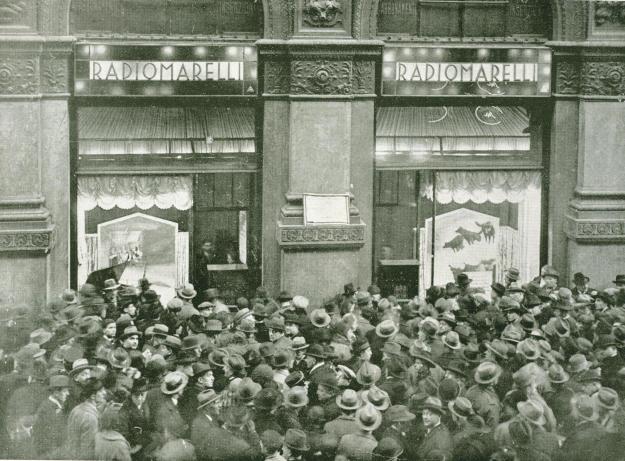 1930 - Giovanni and Ercole Marelli found the Radiomarelli brand based in Milan. A division of Magneti Marelli is dedicated to the production of radio equipment. The commercial slogan, also reported in the logo, is – The best in radio.
1931 – On Monday evenings from the Radiomarelli store in Galleria Vittorio Emanuele in Milan, open for the occasion, the concerts held in the hall of the Royal Conservatory of Milan were broadcast to the public with two Musagete radios. Every Monday a crowd of people used to gather to enjoy the listening.
1932 - Magneti Marelli establishes Fivre, the Fabbrica Italiana Valvole Radio Elettriche (Italian Electric Radio Valves Factory), for the production of electric radio valves and cathode-ray tubes for future television.
1936 - Radiomarelli begins experimental research in the television field.
1956 - In the 50s the company paid particular attention to the design of its products, some designed in collaboration with external professionals, such as the Movision rv126 TV, designed by Pierluigi Spadolini.
60s – The decade of the company's greatest success, which produces radios, televisions and home appliances.
70s - Invasion of the European market by the producers of Japan and Taiwan, whose products are much cheaper, thanks also to the absence of design costs (the first devices were copied). Italian component manufacturers started to fail and equipment manufacturers were forced to turn to Asian component manufacturers, further increasing the cost of their devices. The design is cut and the devices produced can no longer be at the forefront. The delocalization of production begins but the crisis seems to be irreversible.
1975 - Radiomarelli was sold by Magneti Marelli in 1975 to SEIMART elettronica, supported by GEPI (Società di Gestione Partecipazioni Industriali) founded by IRI. SEIMART had already taken over the Magnadyne, the LESA and the Gallo Condor, all of which went soon bankrupt.
1976 - Radiomarelli ceases production activities. SEIMART establishes ELCIT - Elettronica Civile S.r.l. for the production of colour televisions under the Magnadyne and Radiomarelli brands. But Japanese and Turkish production is too strong.
1991 - ELCIT is taken over by the company SANDRETTO, from Turin, which produces injection molding machines. Despite the large investments to restore and diversify production, almost all the staff are placed in lay-off. Radiomarelli ceases to exist.
2018 - The entire group leader MAGNETI MARELLI is sold to the Japanese company CALSONIC KANSEI. Sad goodbye to another of the most important and glorious Italian companies.

The photo on the left is from 1931 and we can see the crowd that gathered every Monday evening in Galleria Vittorio Emanuele in Milan to listen, from the windows of the Radiomarelli store, to the concerts held in the hall of the Royal Conservatory of Milan and broadcast to the public through radio Musagete Radiomarelli 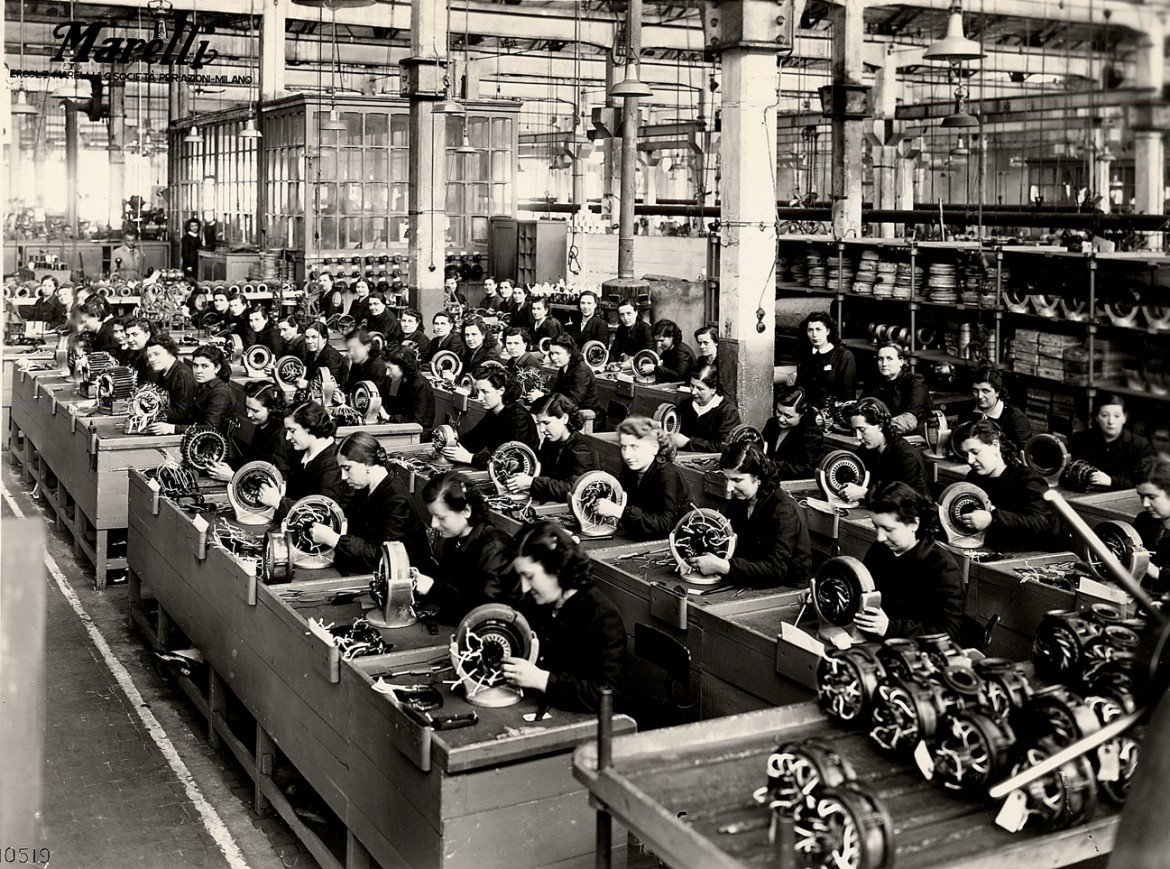 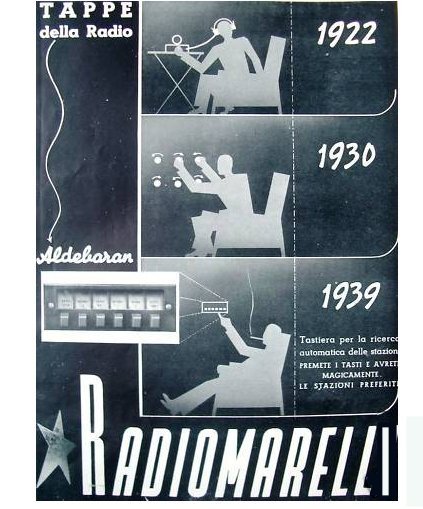 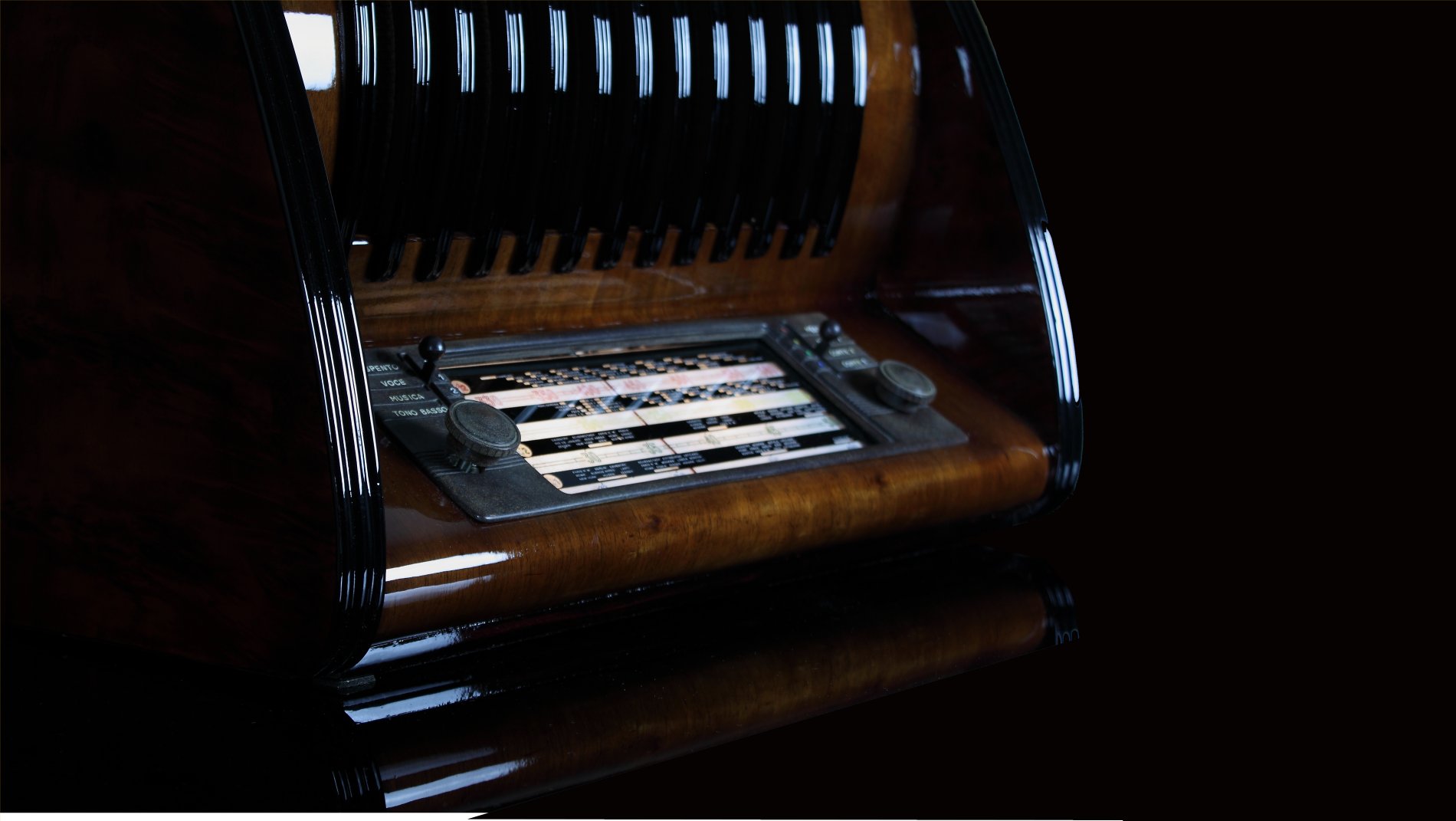 The tone control consists of a three-position equalizer

Personally, on this device, I recommend holding the equalizer in the “Voce” position.
The same switch is used to switch off the device by moving the knob to the “Spento - Off” position. 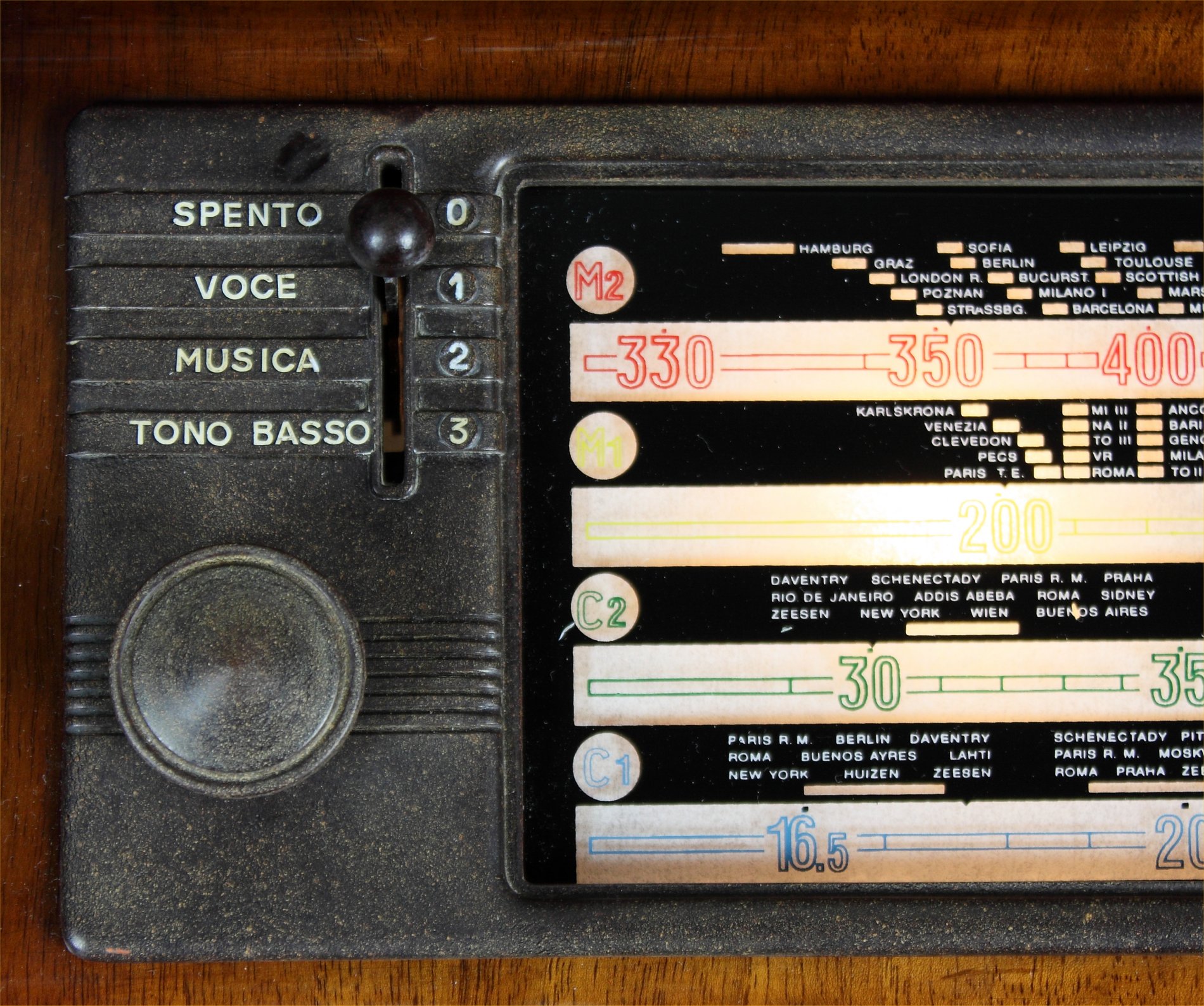 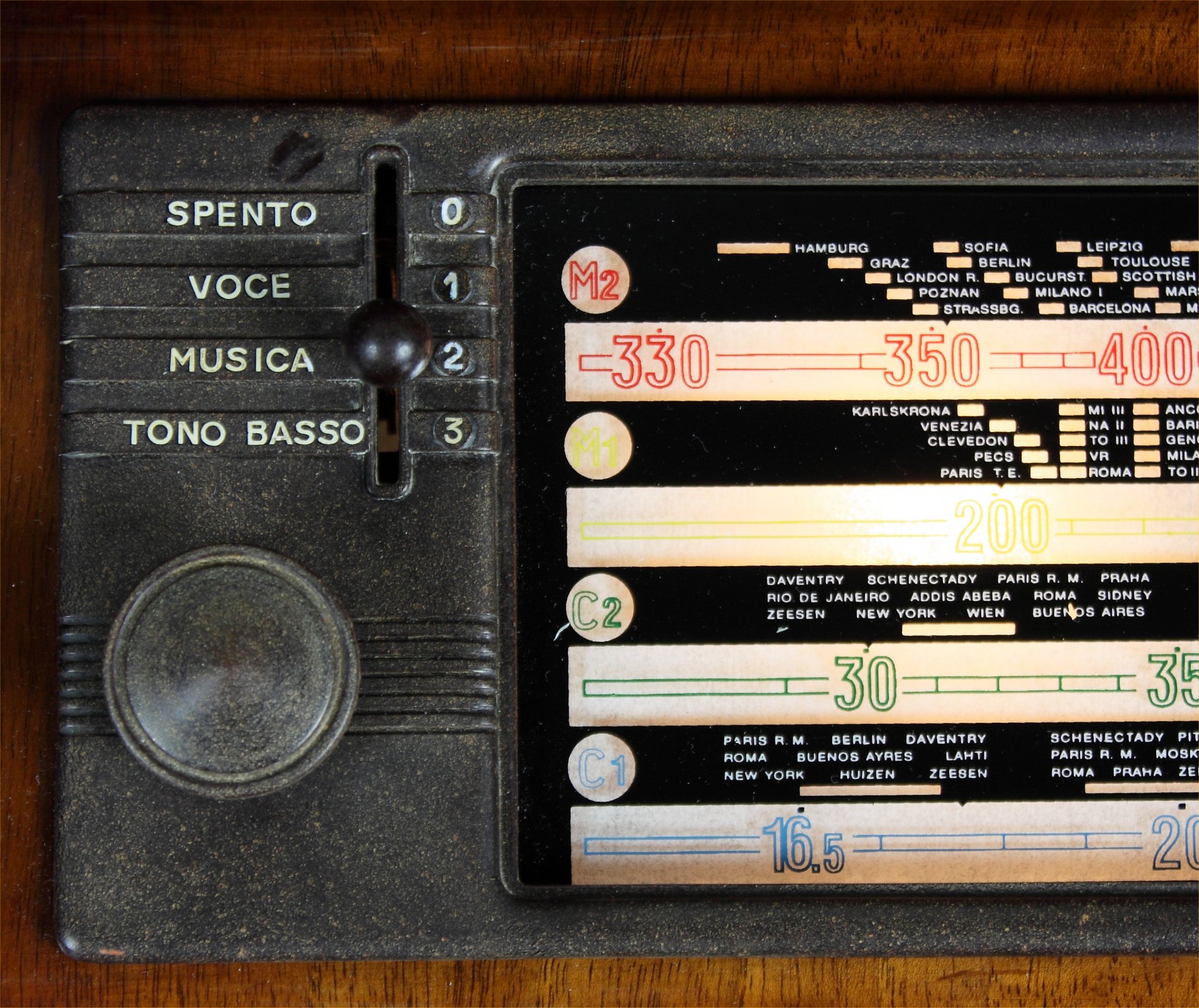 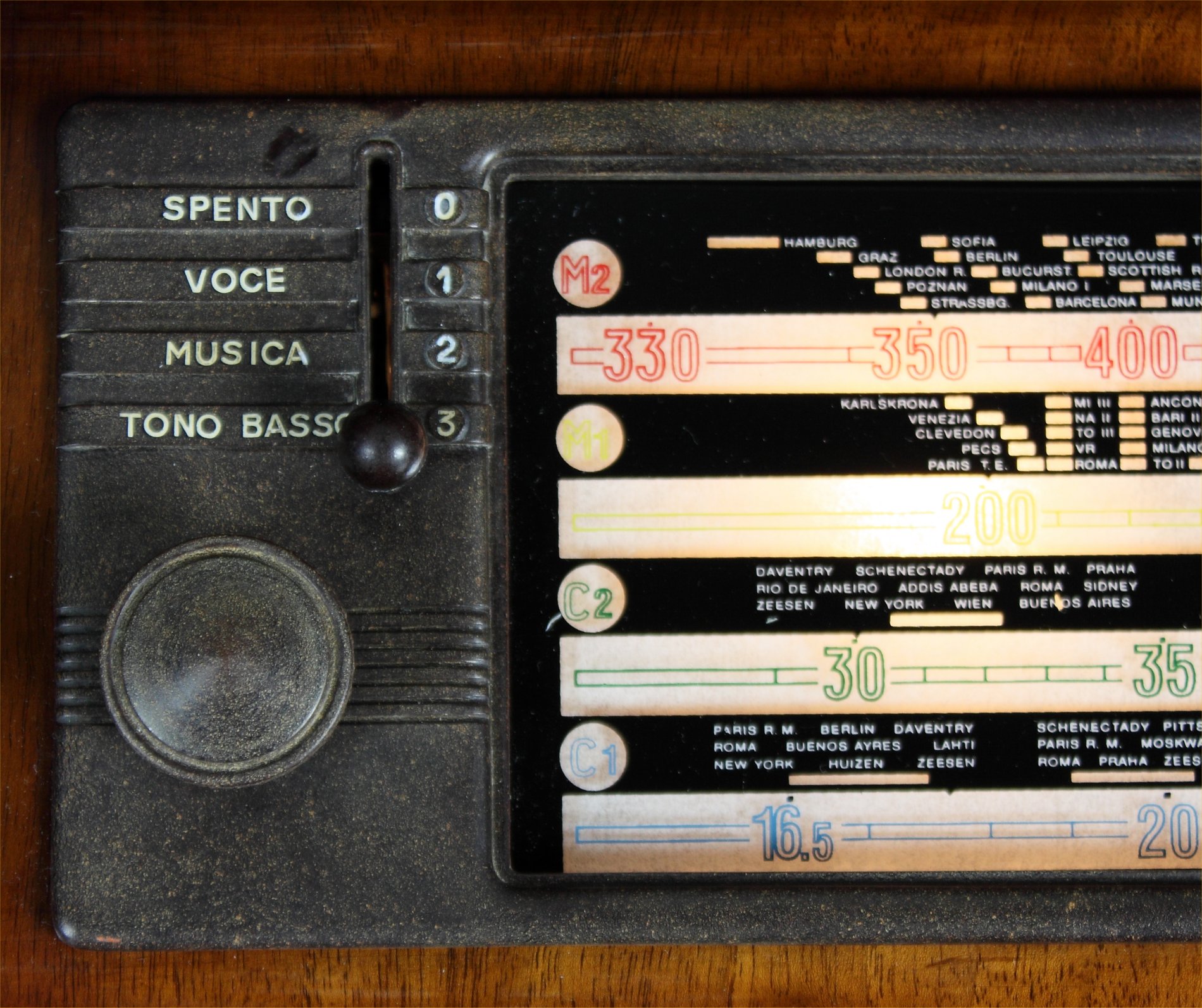 The tuning control is very simple.
The tune drive pin acts directly on a threaded fly-wheel which also works as a pulley.
The tuning cord is connected to the tuning indicator through some pulleys.
The cord has been replaced.

The band switch is very practical, the band is selected by a lever knob located on the right side of the front.
In order to exclude the tuner input and insert the phono input, pull the volume knob towards you. 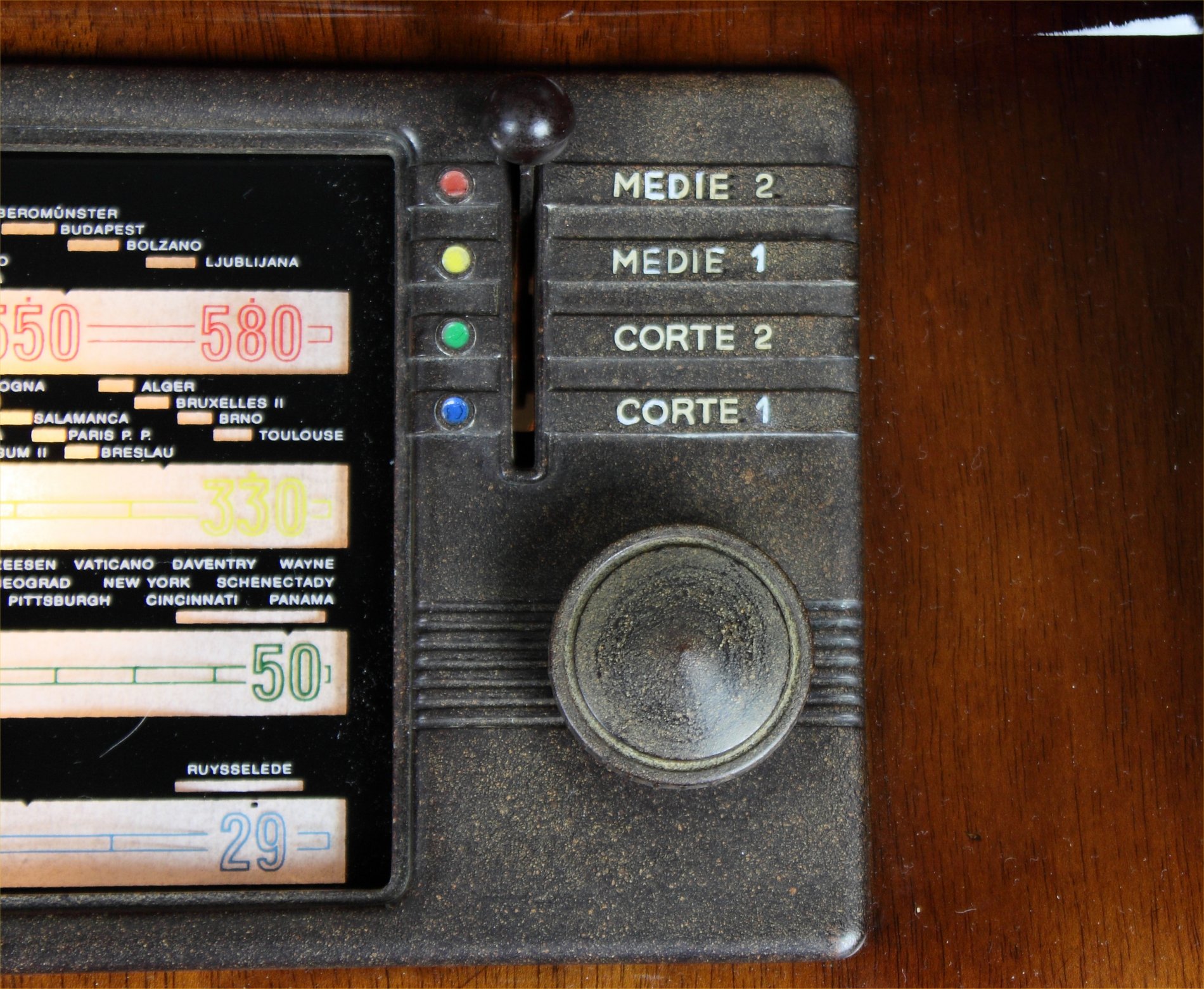 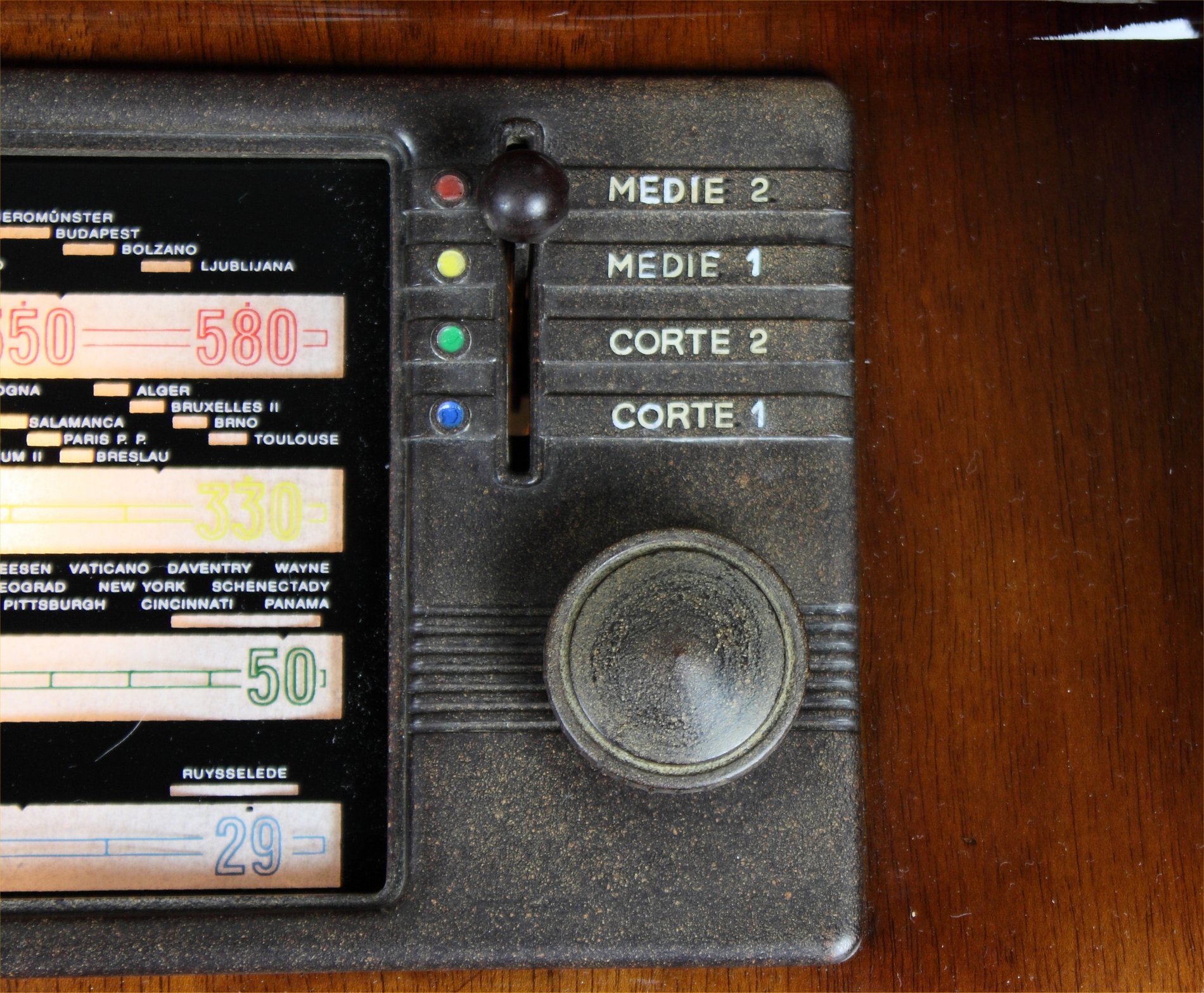 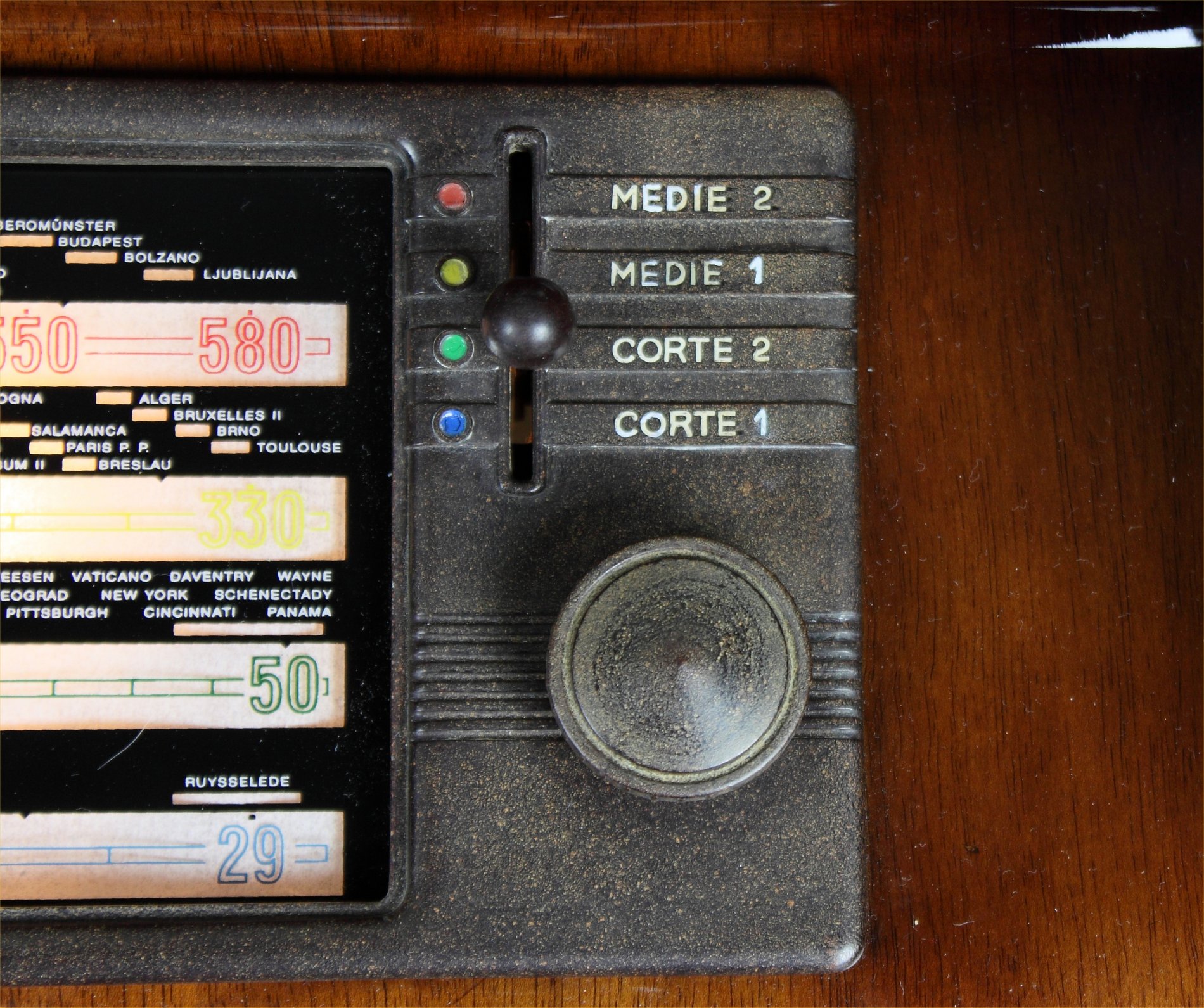 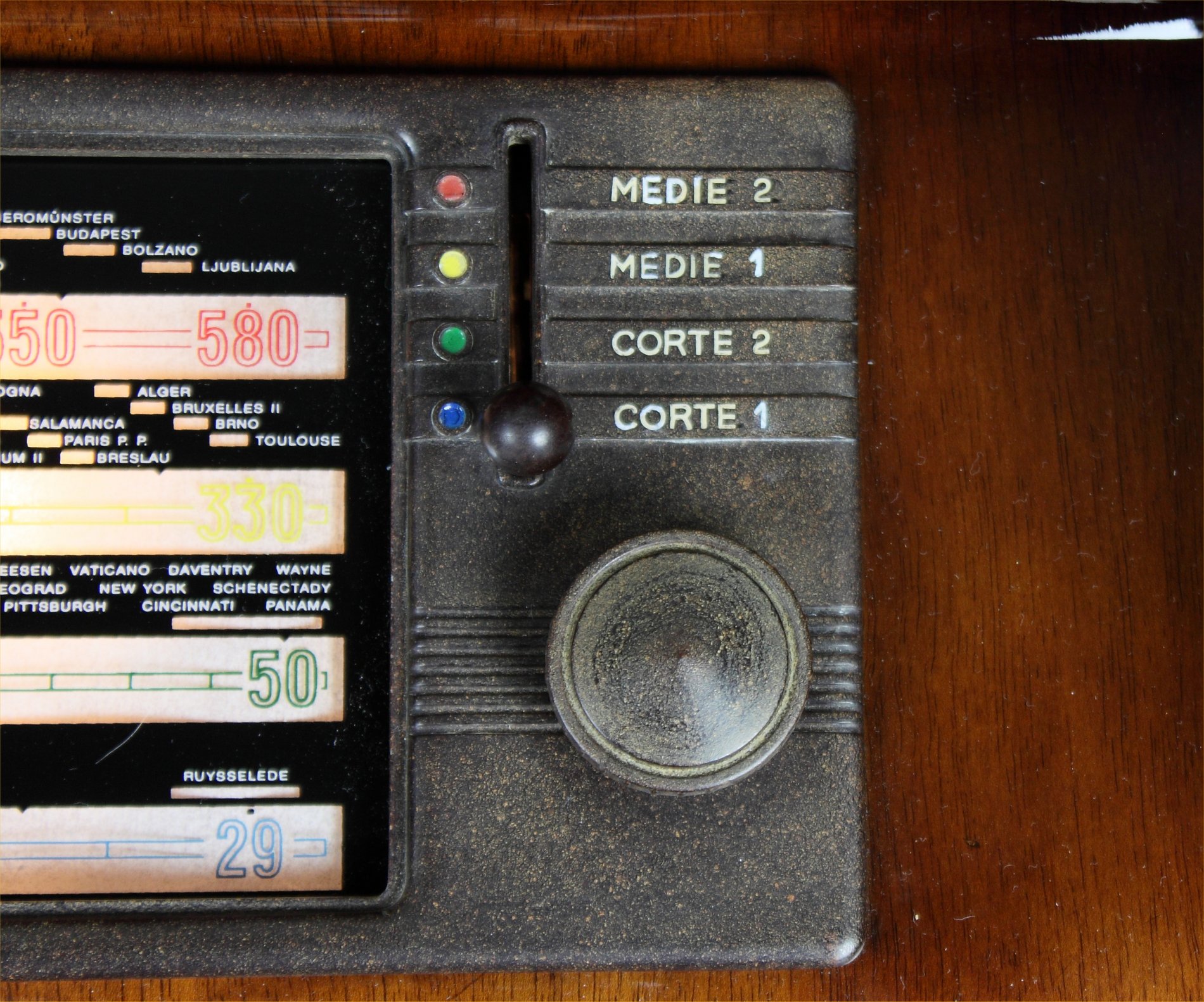 The commands are very simple.
The switch on the left of the dial glass controls the On/Off of the unit and some functions of Sound Equalization.
There are four positions:
- SPENTO -  Off
- VOCE - The acute tones are accentuated
- MUSICA - The acute tones remain linear
- TONO BASSO - Acute tones are further attenuated
Below we find the volume control knob which also has the function of selecting the signal input.
Pulling the knob selects the Phono Input. Pressing it selects the Radio input. 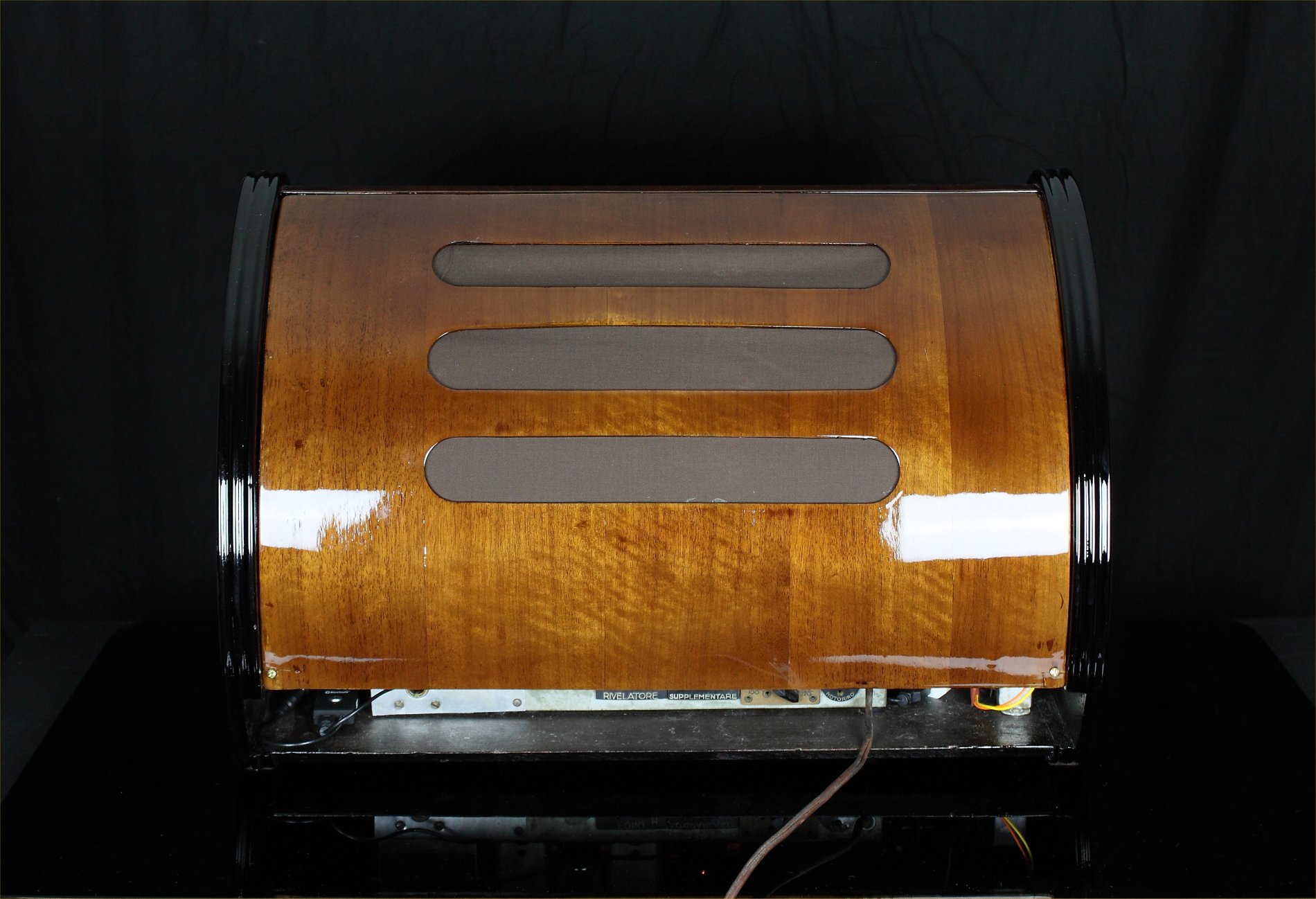 On the rear side we find the Turntable input. 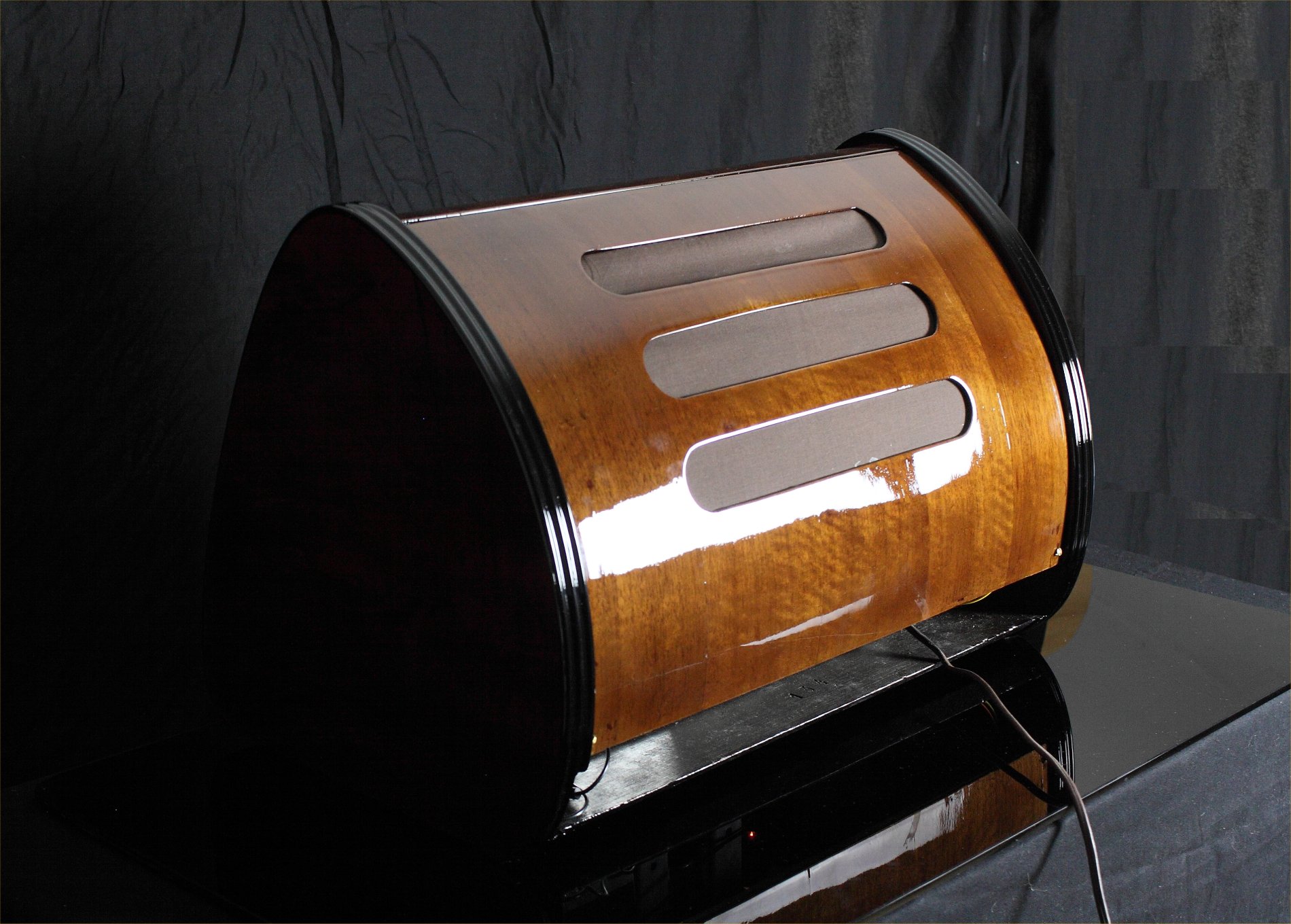 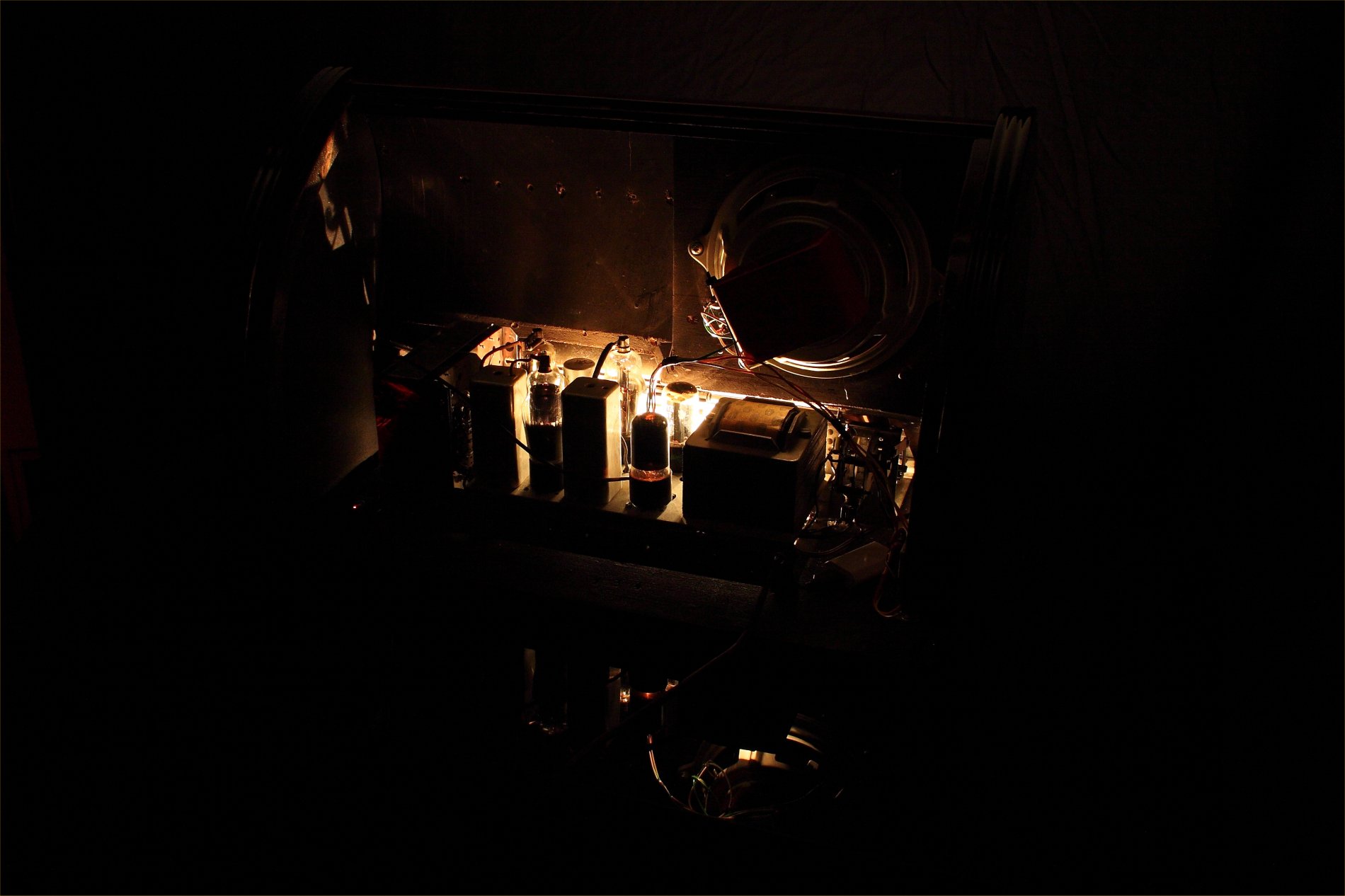