The decision to restore this unit has been carefully considered before taking any action. The key elements examined are two.

First: in the 2D model the entire set of loudspeakers is located on the front.
The models produced in subsequent years were equipped with a 3D system for sound diffusion; the medium/high frequencies were spread also from the sides of the unit in order to provide an optimal listening while offering the great advantage to enable people performing other activities moving free within the area.
Unfortunately, most of the times the radios were placed on a shelf or on a piece of furniture closed at the sides, making the lateral diffusion totally useless, if not a disadvantage. In fact, a big frontal broadband and one or more electrostatic supertweeters were typically installed on units with 3D, while mid/tweeters were on the sides. So, if the side speakers were occluded by books or other barriers, the sound was consequently compromised, resulting not as bright as it could have been.
On the contrary, in this device the entire set of speakers is installed in front, making spreading the sound easy and with great naturalness and transparency.

Second: the great visual impact of the cabinet.
The careful choice of woods and the fine workmanship reveal the beauty of this piece at first glance.
The professional restoration further enhances it, giving new life to such a fine handmade object like we have not seen in decades.
There is no trace of plastic, the whole cabinet develops in contrast with metals and woods, arranged to enliven the entire piece.
However, as already mentioned, from the point of view of the style, Nordmende has always been considered rather austere. Large appliances such as Othello remain impressive and rigorous, especially suited to classic furnishing or brave and refined contrast combinations, which further improve the visual impact preserving an unrivaled acoustic at the same time: pleasant, sophisticated and deep.
Tone controls with separate linear indicators, final A Class stage with EL84 and triode preamp, effective system of feedback that linearizes the response; all these elements make listening to this unit extremely pleasant and fulfilling.

Of course there is also the 3D model, so you can choice the preferred model depending on the location.

In conclusion, a great Normende unit.

Produced in 1955, the Othello belongs to the Nordmende high class tube radios. 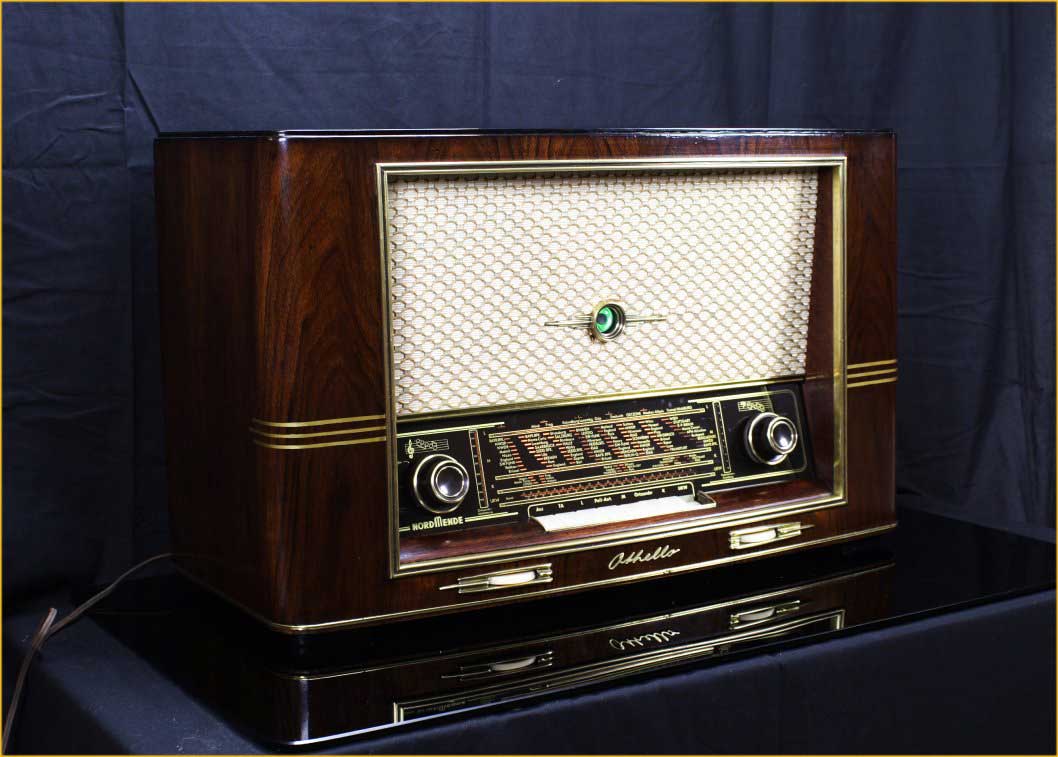 - FM frequency range winded from 88 up to 108 MHz - The tube radios produced in Germany in the years 50/60 are famous worldwide for their excellent sound quality, the beauty of their furniture, their strength and for their construction standards without compromise. Unfortunately the FM band extending from 87.5 to 100 MHz for which are scarcely usable in most cases.
After careful study and a lot of tests we were able to obtain a frequency range by this unit from 88 to 108 MHz.We have also reconstructed a display exactly identical to the original, made with the same materials and the same techniques, but with the new frequency span.The result is perfect. An original device, but with the ability to listen all stations in any country.
- Bluetooth receiver embed - The unit is equipped with a BLUETOOTH receiver powered directly by the receiver power supply. This makes it possible to control the amplifier from any external digital device as an IPAD, a Smartphone, or a sophisticated multimedia station. So you can hear your preferred web station or your lossesless file without cables on the room. Wireless Receiver can be equipped upon requests.
- Multi Platform Connection - A customized adaptation cable to connect any digital device as Iphone, Smartphone, Laptop, CD Player etc. will be provided with this radio. This special cable suits the different impedances between the modern equipment and the receiver. Furthermore the two stereo channels flow into one without increasing the load to the input unit. 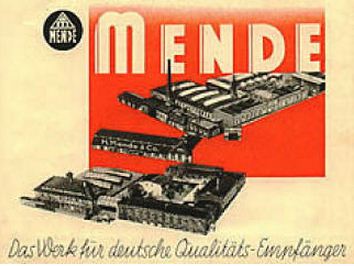 In 1923 Otto Hermann Mende founded Radio H. Mende & Co. in Dresden. After the bombing of the factory in 1945, Martin Mende (son of the founder) created a new company in Bremen, the "North German Mende Broadcast GmbH" whose name was later changed into NORDMENDE. 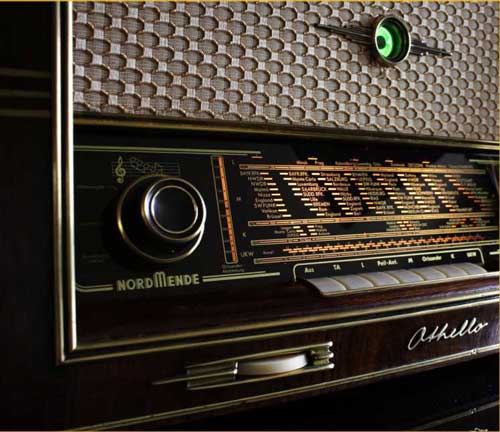 This device controls are arranged unusually compared to the traditional collocation. The large knobs of the tone controls are coaxial knobs for volume and tuning.
Above the large tone control knobs there is a band that lights up gradually indicating the emphasis on the band on which it acts.

Inside the cabinet there is a dipole for FM reception and a ferrite rotating aerial for AM reception.

The reception sensitivity with internal aerials is very good.
Using an external aerial sensitivity is further increased.
This unit was in fact produced in a period when there were not many radio stations and those available fairly apart from each others.

Ferrite aerial can be rotated from the outside to achieve a perfect tuning of the device in the AM.
In this picture see the rotation mechanism and the position indicator of the aerial. 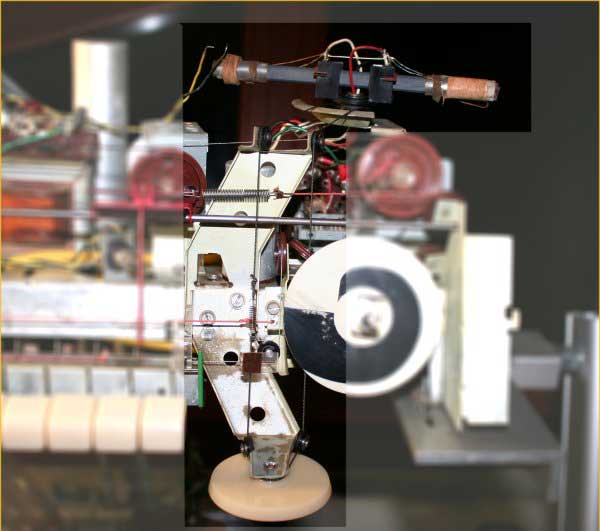 In Othello and Tannhauser (the two top models) was expected to double tune for medium wave with two separate mechanisms.
Pressing the MW button with the usual tuning dial is made in the normal search on Medium Wave bands and the indication is that the main tuning display.
Pressing the Ortssender button and moving the white knob on the bottom left you will search in medium wave with an decreased sensitivity and the indication is secondary on the little vertical display.
You receive thereby better the local stations.

The speakers three are seats on front.
There is a very efficient cone broadband and a protected cone tweeter.
For a clear treble reproduction there is an electrostatic SuperTweeter.
The acoustic performance is truly remarkable and satisfying.

In the center of the speakers panel we find the magic eye that indicates the perfect tuning station.
To the left is the volume control (with loudness built-in). Coaxially there is the treble control.
Pulling the volume knob we obtain a narrow station tuning on MW band (udible high frequencies increased)
Continuing we find the OM high sensibility (vertical), FM, AM main display for Long Wave Medium and Court bands, Ferrite aerial position (vertical) display.

We then find the keys in the order the Turntable, LW, Ferrite aerial, MW, MW high sensibility, KW and FM knobs.
Finally, there is the tuning knob. Coaxially there is the bass control.
Under the dialglass there are two knobs arranged axially: one on the left controls the tuning stations in OM narrow band, the right rotates the ferrite aerial.
Each of these two knobs is equipped with indicator on themain dialglass. 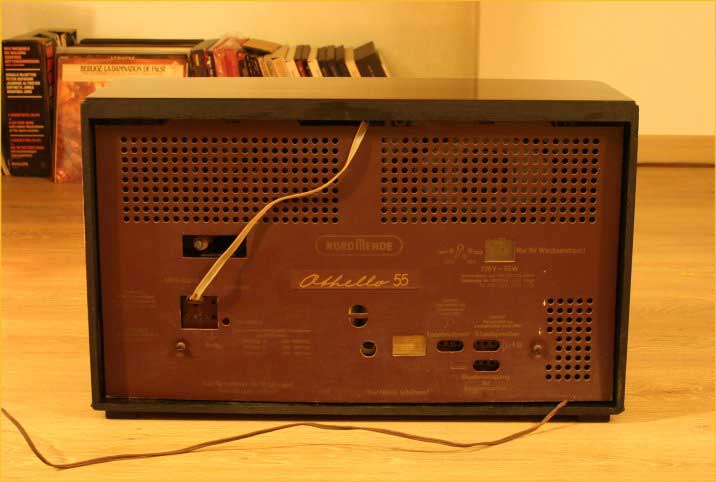 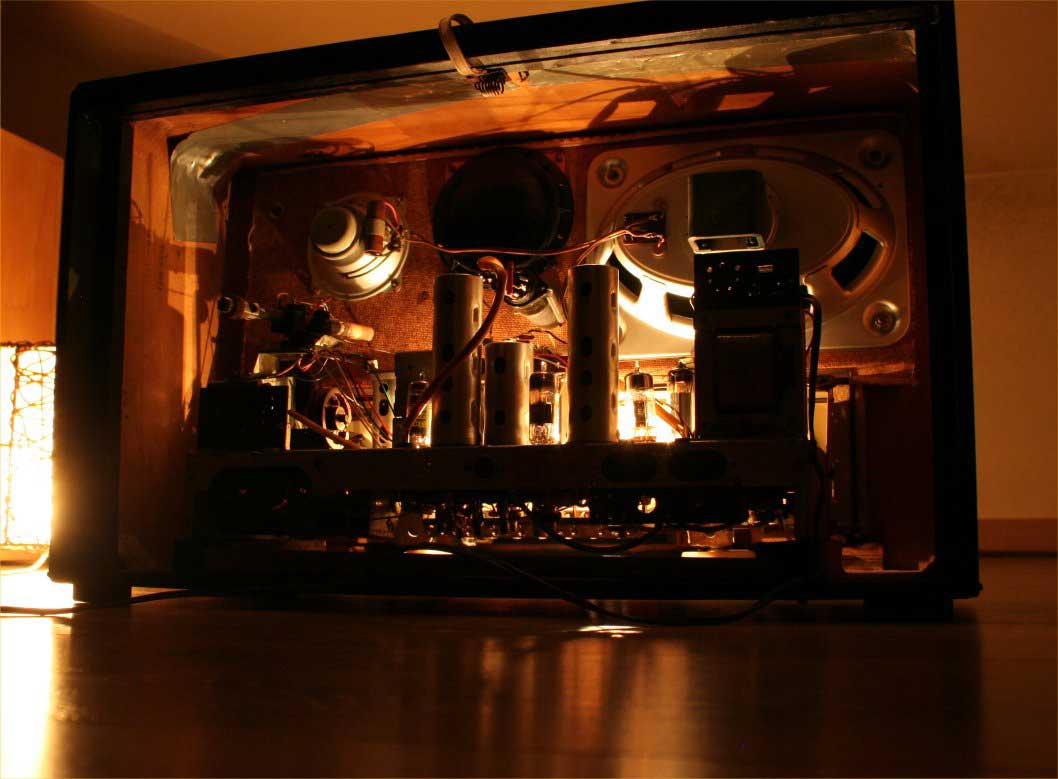