Philips products in Italy have always been a little ignored in the HI-FI world: they were linked to the other thousands of low technological content products, appliances, consumer products and so on that this producer has made through the years.

Nothing more wrong and superficial.
Philips is a manufacturer with a huge know-how. One of the best tuners in the world comes from them, the AH673.
One of the most broadband speakers in the world the AD9710 comes from them.
Even the invention of the compact cassette and then of the Cds comes from them.
They made maybe the best CD mechanism in the world, the CDM1, the first DVD recorder, the technology of the devices produced from a certain date with the Grundig, Marantz, B&O and other marks.
So, who snubs Philips does it for lack of knowledge.

Presented the manufacturer, let's talk now about the machine.

In greek mithology, Uranus god of the sky, Gaia's husband, threw his children in the bowels of the earth as long as they born to avoid their supremacy. Gaia, horrified, made for her 12th son, the titan Cronus, the adamantine sickle. Cronus evirated Uranus and from his genitals thrown in the sea was born Aphrodite.
Probably in the choice of the name at the Philips headquarters refered to the magnitude of the divinity, but it's a fact that the Uranus Tonmeister B7D52AS is one of the best tube receivers ever made by this manufacturer.
Built to compete with Telefunken Opus, Nordmende 3004, Grundig Stereomeister, owes the second part of its name “Tonmeister – Master of Sound” surely to the care it has been studied with, in any detail.

The output stages are made of couples of pentodes in Push-Pull with Voltage Negative Feedback without frequency correction. In this way it is ensured the maximum linearity with the less compression effect possible, undesireable effect typical of the Negative Feedback circuits. Other manufacturers made other choices and this determines the different personality of these devices.
The Philips by this point of view distinguishes for its timbre neutrality.
The pre-amplifier stage is provided with many equalization possibilities but I prefere to listen excluding them: I don't feel the necessity with these loudspeakers there's no acoustic deformation to correct.

The radio-frequency stage is of a very high level and classical setting provided with excludable AFC. Interesting the typical little IF transformers, difficult to de-tare and insensitive to fashes.

Even in this case I matched for this try-out the Uranus with its cousin Marantz CD94 MKII, wonderful machine with CDM1 component and a pair of TDA1541A in antiphase, one of the best existing machines, and to a pair of Cabasse Dinghy 222, high efficiency speakers described later.

The stations stay perfectly stable thanks to the AFC, so the listening of the tuner is very relaxing. The listening from the CD or other sources is timbrically very balanced.
Listening from an Ipod is possible and comfortable.

Even in this case its an authentic vintage Hi-Fi System with no compromises, for those who know exactly what they are buying.

The device is equipped with the rare Stereo Decoder, allowing you to listen to a multitude of FM Stereo broadcasts in stereo

It is possible to connect any speaker, preferably with high efficiency.

Each radio is equipped with a special cable that connects with any digital source.

- Stereo Decoder - The device has an integrated Stereo Decoder. This allows you to listen to stations that use this transmissions system in stereo. Many stereo receivers are not equipped with a Multiplexer so they work in stereo only when you select the record player’s /Recorder/Aux input . Such receivers, in listening to the radio, send the same signal to both channels, so listening is monaural. This is not the case with the Concertino 2380, which is totally beyond stereo.

- Built-in Bluetooth receiver - This unit can be equipped with a BLUETOOTH receiver powered directly from the device. That makes it possible to use the amplifier from any digital device, IPAD, Smartphone, or sophisticated multimedia station. You can listen to your wireless Web Stations or favorite music around the room. On request, we can also mount a Wireless Receiver.

- Multi Platform connections - Along with the device, we can also provides you an impedance adapter cable to connect any digital source, such as iphone, smartphone, computer, CD player, etc. This purpose-built cable adapts different impedances of modern digital equipment. Also the two stereo channels are collected into a single flow without increasing the load input unit.

In 1891, the brothers Gerard and Anton Philips, started to produce the first incandescent bulbs in Eindhoven.
Later, Philips specialized in the production of electro- medical equipment, and in 1918 introduced the first X-ray tube.
In the following years, Philips began specializing in the broadcasting industry. In 1932 the company succeeded in selling over one million radio equipment and became the world’s first producer.
During the Second World War, Philips transferred to the Netherlands Antilles, and returned to the Netherlands at the end of the conflict.
In the second post- war period, began the production of the first televisions, then the launch of the music cassettes in 1963 and the production of the first integrated circuit in 1965.
In 1982 Philips launched with Sony the first compact disc player.
In 1984 Philips acquired the control of the German Grundig.
In the 90's Philips faced a financial crisis.
In 1991 it inserted on the market the Video CD and it is one of the first companies in the world to develop high definition television.
In 1999 Philips established a joint venture with LG Electronics, named LG Display, which ends in 2009.
In 2006 together with Sony launched the first Blu-ray.
In 2009 Phillips launched the first full-HD LCD TV in 21:9 format.
Phillips holds 48,000 registered patents.
Currently, the production is focused on low- energy lighting products and LED systems and services for diagnostics and production of medical devices. 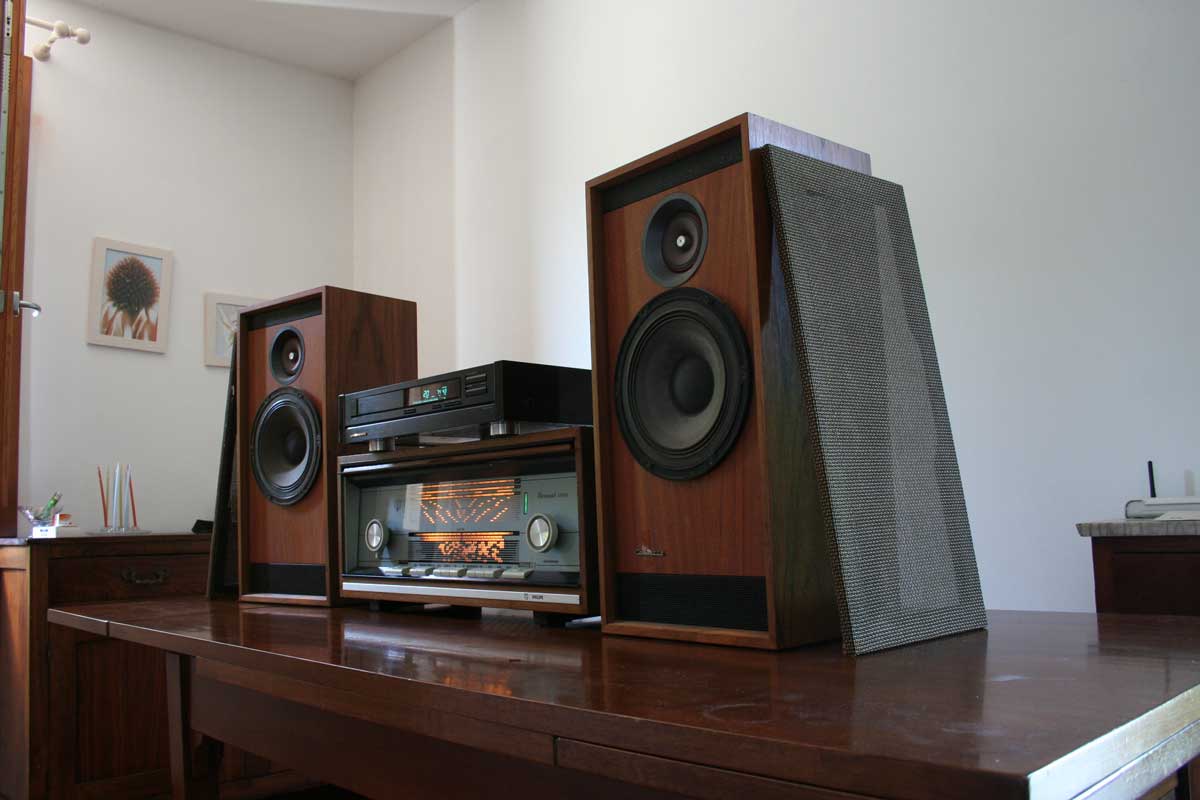 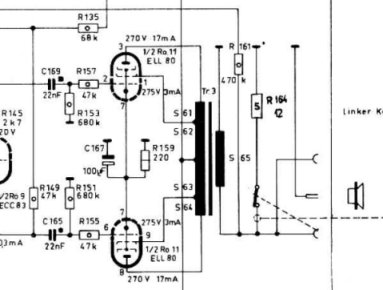 The output stage has been already briefly described in the introduction of the machine, its a clasic Push-Pull in AB class that produces an 8W power per channel.

The interesting fact is the load resistence that excludes automatically when the speakers' jacks are plugged in, avoiding the overload of the final stadium in case of powering it up without speakers connected.

The device is equipped with two aerials. A ferrite for AM ranges and a wire loaded for the FM range.

Listening to AM was already considered unimportant at the time, outlined by FM features. 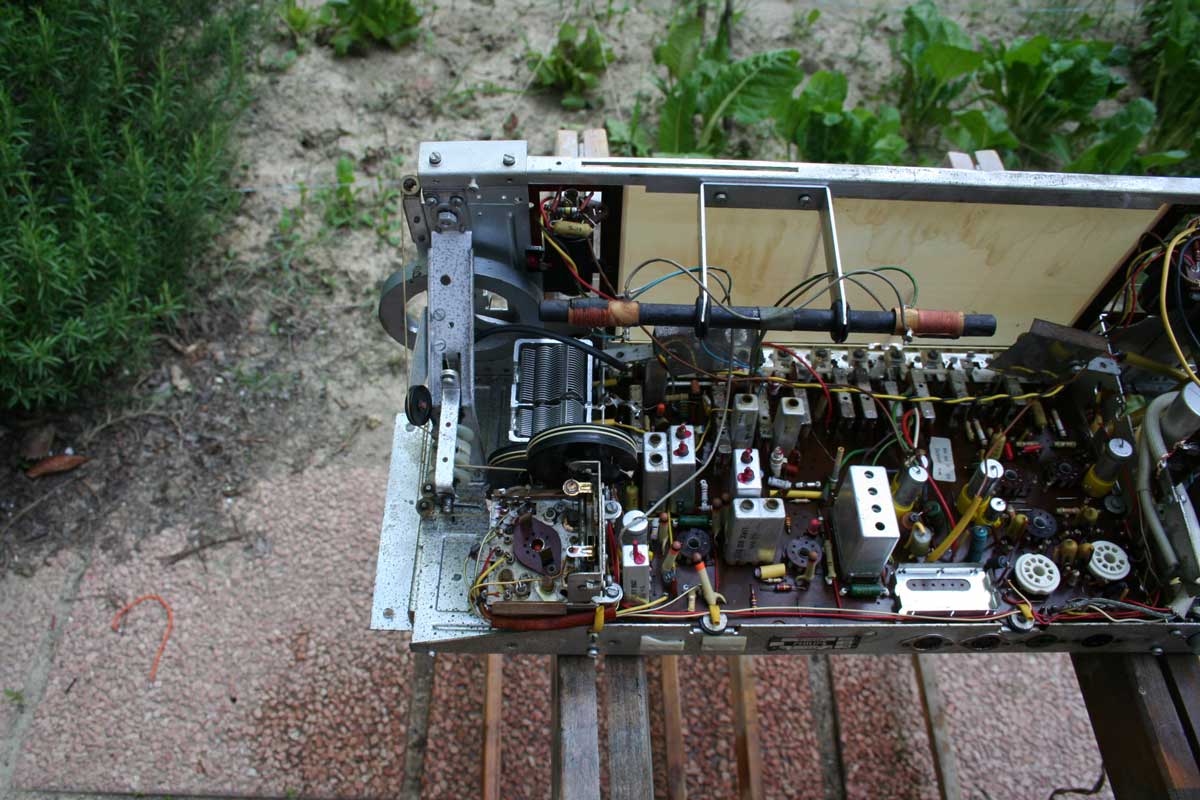 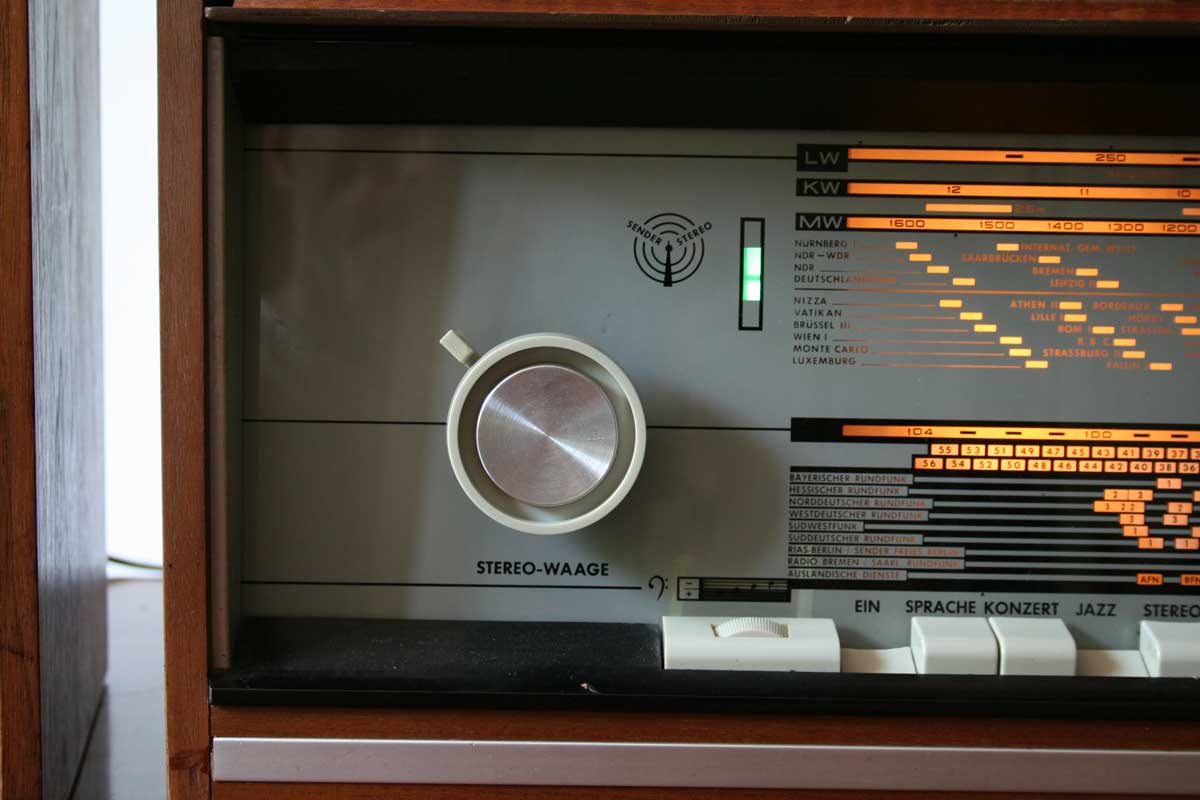 The correction system of the frequency response, quite antiquate command in such a machine but at the top those years, is made of three buttons that instert three pre-defined equalization curves.
I prefere to listen with the “Jazz” button switched.

The tone control system is very efficient. Above the large tone control knobs there is a band that lights up gradually indicating the emphasis on the band on which it acts. 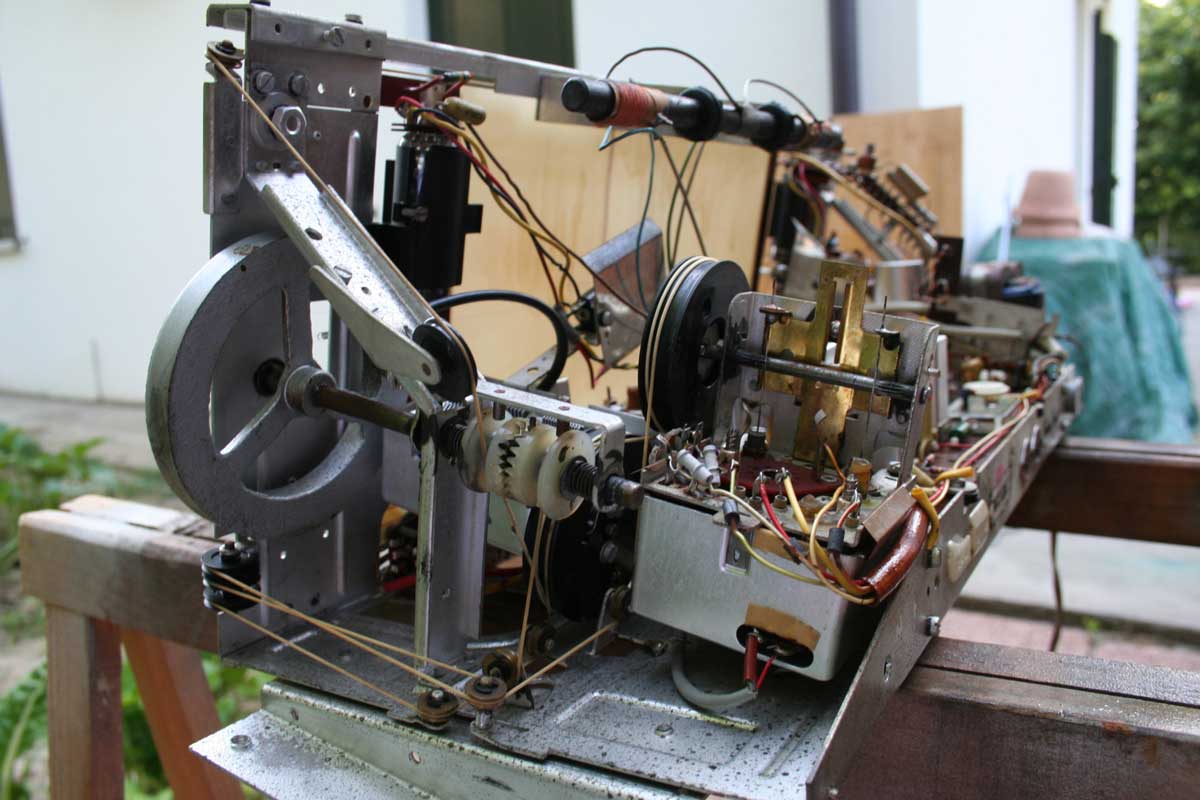 The unit is equipped with mechanisms for keeping separate the AM and FM bands.
The movement is transferred to both mechanisms with a system of pulleys and separated gears.

Another exclusive detail, this device is provided with 2 magic eyes. The first, on the left indicates when and with what power we are receiving a stereo channel. The second, on the right, indicates the tuning of each station.
Both the magic eyes are new. 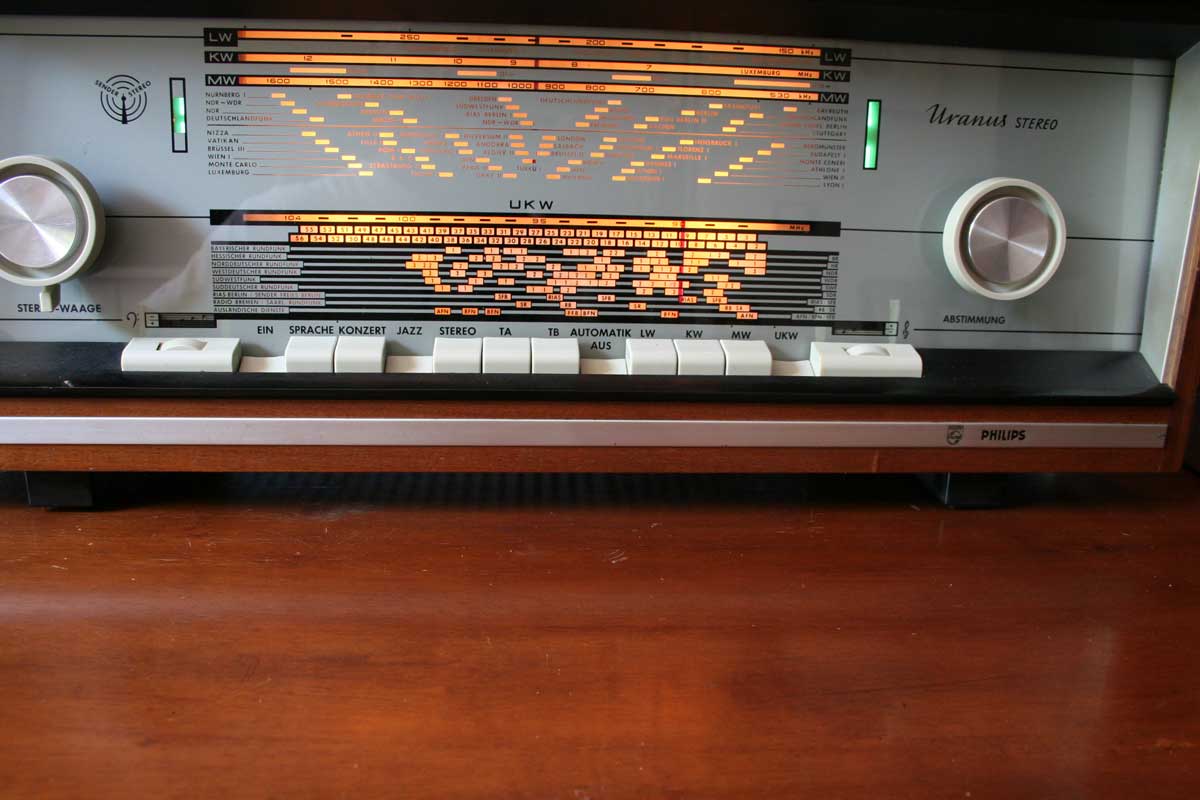 The Automatik button is the one of the AFC that permits to maintain always perfectly tuned a station once tuned in.
That is not to be used during the research of the station, otherwise the receiver would concentrate only on the most powerful stations.
Once tuned-in the prefered station pressing this button the receiver will correct automatically possible frequency skiddings, keeping always perfectly tuned.

Coaxially, we find the balance knob.
The magic eye that indicates the presence of a stereo station.
Going on, we find the AM scale for the Long, medium, and short waves and the FM scale.
Furher on the right we find the tuning knob.

The magic eye that indicates the perfect tuning of each station.
Below we find in the order: bass controls, on and off buttons, the three EQ buttons, the mono/stereo button, and the selection of the inputs buttons (Turntable, Recorder/CD, AFC, long medium short waves, FM)
We find in the end the treble control. 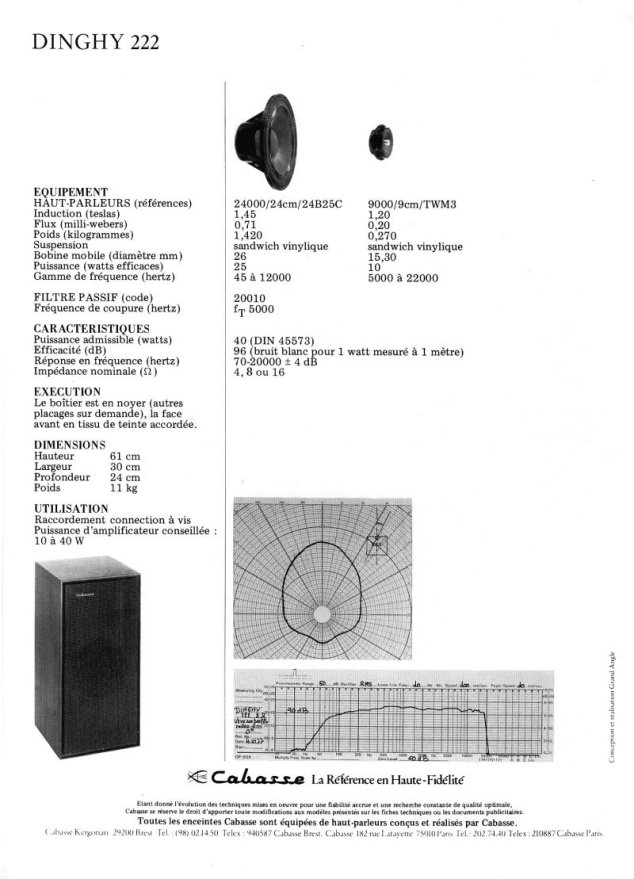 I used the Dinghy 221 and 222, prefering the last ones even if more expensive, because they keep almost every feature of the single-driver (the woofer is cut at 5000 Hz) with an extension, on the tops and on the lows that the 221 can only dream.

Because of the crossover the efficiency is lower than 2db but still remains very high, settling at 96db.

This feature allows the Telefunken to be used normally at a fraction of its real power, for the benefit of linearity.
The Dinghy sound very fast despite the appearence, the string instruments come out of the speakers with an effortlessness that makes them get close to the Open Baffle.

The loudspeakers are of very high quality, made on Cabasse detailed bill.
The cabinet is well finished and its dimensions are incredibly limited for the performance they offer.
The material published is taken from the very interesting trans-apline forum dedicated to this prestigious brand: vedi 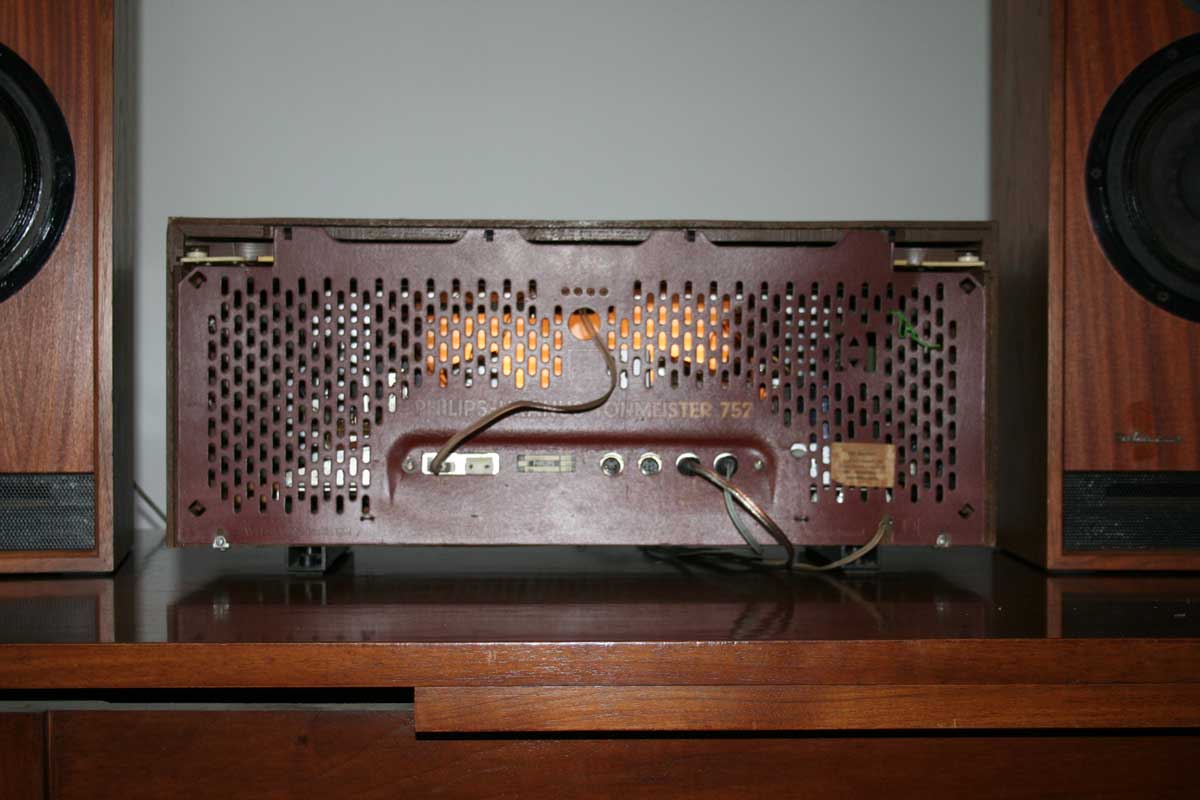 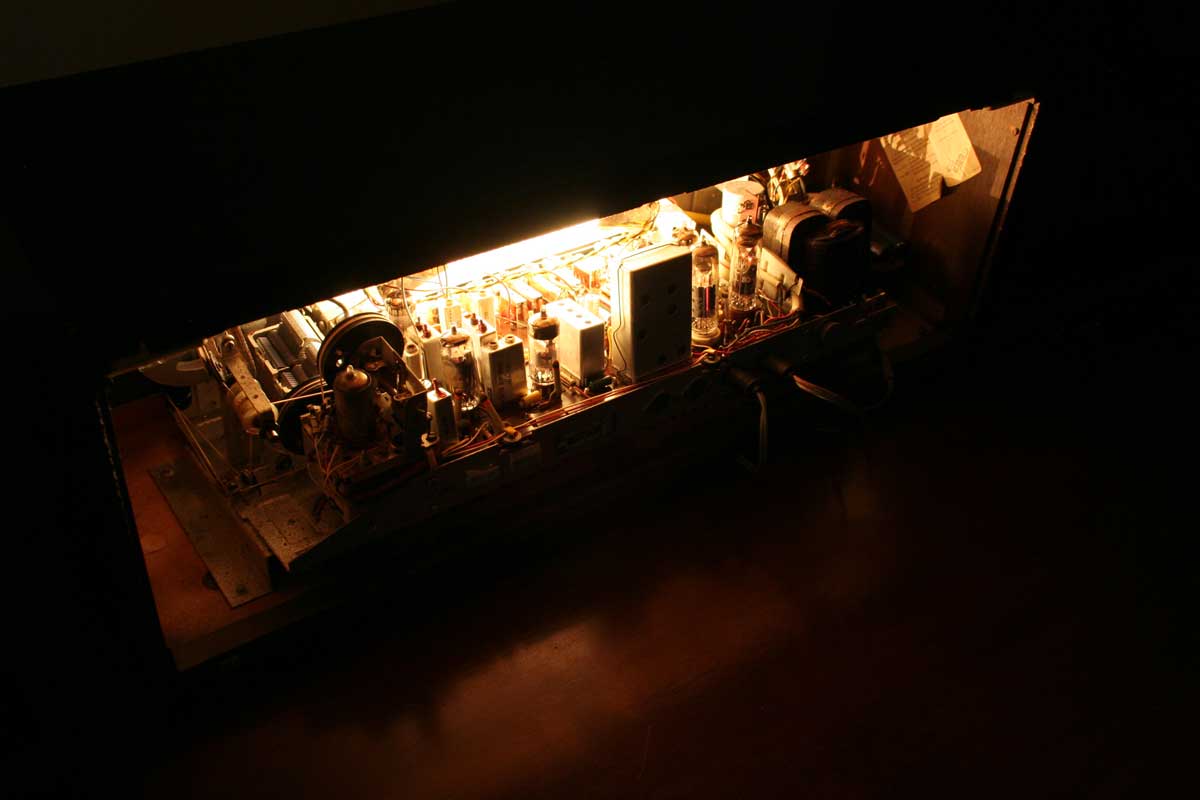