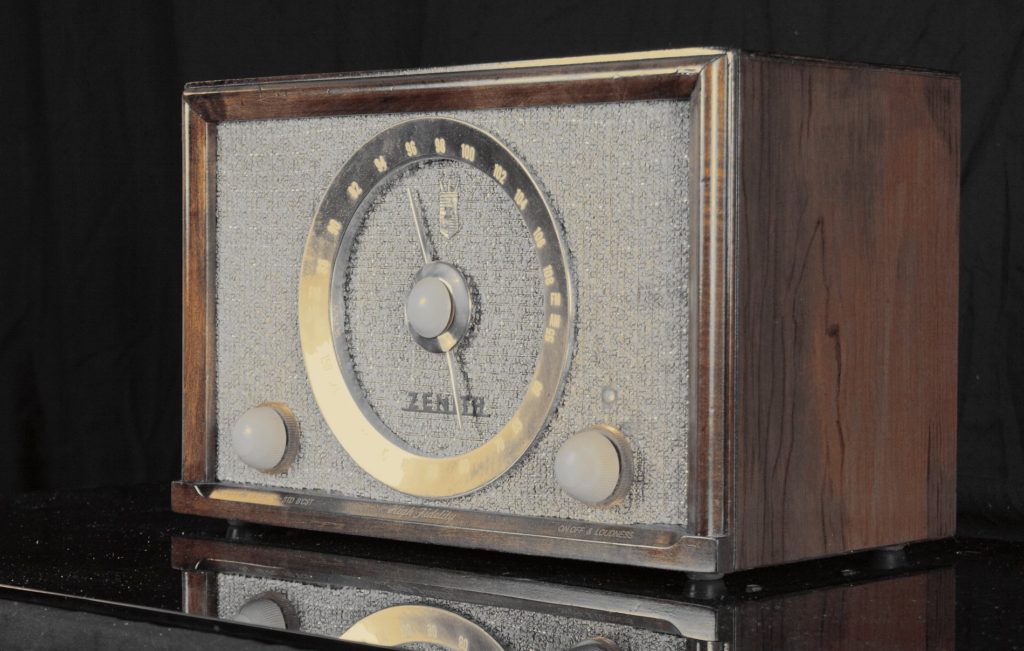 Produced in 1956 in Illinois (USA), the ZENITH B835R is a radio with very interesting features.

First of all, the cabinet is made of wood. This grants the device a quite extended tone quality.
Most of the devices produced in the USA in those years made extensive use of different plastics or agglomerates. This allowed to produce devices with very modern and creative shapes and designs. Nevertheless, none of these solutions gives a musicality similar to that of devices with wooden cabinets.
The loudspeaker is large for the device. These two details together ensure a musicality I have rarely found in small American devices.

Reception is good, both in AM and FM.
The tuner is equipped with AFC (Automatic Frequency Control) so FM reception is very stable.
The AFC must be excluded during the station search phase, otherwise the device automatically tunes only in the strongest stations.
Once the favorite station is tuned, the AFC can be insterted so that the tuned station remains stable.

The tuning has a step-down system and the two pointers are large and clearly visible, so the tuning is rather precise.
Another interesting feature of the ZENITH B835R is that in the rear there is an RCA socket for the Phono input.
A small switch is placed next to it and allows to choose whether to listen to the signal coming from the radio or the Phono input.
A turntable with piezo cartridge or other devices that provide similar output voltage can be connected to this input.

Basically, a device of modest dimensions but very enjoyable, versatile and pleasant.

This device is originally powered by 120 volts, so a special adapter is provided for countries that use different line voltages.

The whole playlist is dedicated to the USA, and in particular to the songs, original or interpreted, that this device ... probably knows already.

The first track I propose in the playlist is one of Mister Jazz's most famous songs, as Duke Ellington called him, I'm talking about Louis Armstrong.
Louis was born in a wooden shack in the very poor negro neighborhood of New Orleans. As a child, he is abandoned by his father and grows up on the streets.
He learns to play in a house of correction for negroes, after being arrested for shooting a friend on New Year's Eve of 1913.
After a tiring but successful life, after working on some films, including Paris blues in 1963, he brings to success Hello Dolly!, written by Jerry Herman for the musical of the same name.
In the musical, Dolly Gallagher is an ambitious and beautiful lady who arranges marriages and does business in the New York of the early 900s. The track accompanies the scene in which Dolly arrives at the Harmonia Gardens Rudolph, welcomed with honors by the restaurant staff.

It follows a classic certainly known by everyone, “Oh happy day”, which interpreted by the queen of Soul Music, Aretha Franklin, is really something else.
Soul Music, the real meaning of which is not “Music of the Soul”, simply “Spiritual Music”, but rather “Music of a typically black spirituality”. A spirituality which continuously alternates states of joy with states of emotion. A spirituality that united the Soul Sisters (in this case) in a fate determined by the color of their skin. For example the lyrics of the song played by Aretha say:
Oh happy day ... When Jesus washed ... He washed my sins away.
He taught me how to watch, fight and pray ... and live rejoicing everyday

In the playlist, famous songs by B.B.King, Johnny Cash and Withney Houston follow.

The company known today as Zenith was founded in Chicago in 1918 by Karl Hassel and Ralph H. G. Mathews.
The original name “Z-Nith.” derived from the call letters of the founders’ amateur radio station, 9ZN.
In 1921, was moved into a 3,000-square-foot factory in Chicago.
In 1922, the company production rise between five radios each week to 50 per week. With the money of Eugene F. McDonald, Jr., Hassel and Mathews founded the Zenith Radio Corporation in 1923.
Zenith released the first portable radio in 1924.
In 1926 it released the first radio that operated entirely on household electricity.
Zenith became a leader in other consumer electronics developments, such as the first all-electronic TV station (1939), the first FM radio station in the Midwest (1940) and the world’s first subscription TV system.
With the coming of the Depression, Zenith was forced to change its focus from high-quality radios to more affordable ones.
During World War II, Zenith made bomb fuses and other devices for the government.
In 1955 Zenith released the first wireless remotes for TV.
In 1970 competitive pressures led Zenith entered the original equipment manufacturer (OEM) components and cable television products businesses.
In 1988, Zenith has been a leader in HDTV technologies.
In 1995, LG Electronics Inc. acquired a majority interest in Zenith.
In 1999, Zenith became a wholly owned subsidiary of LG. 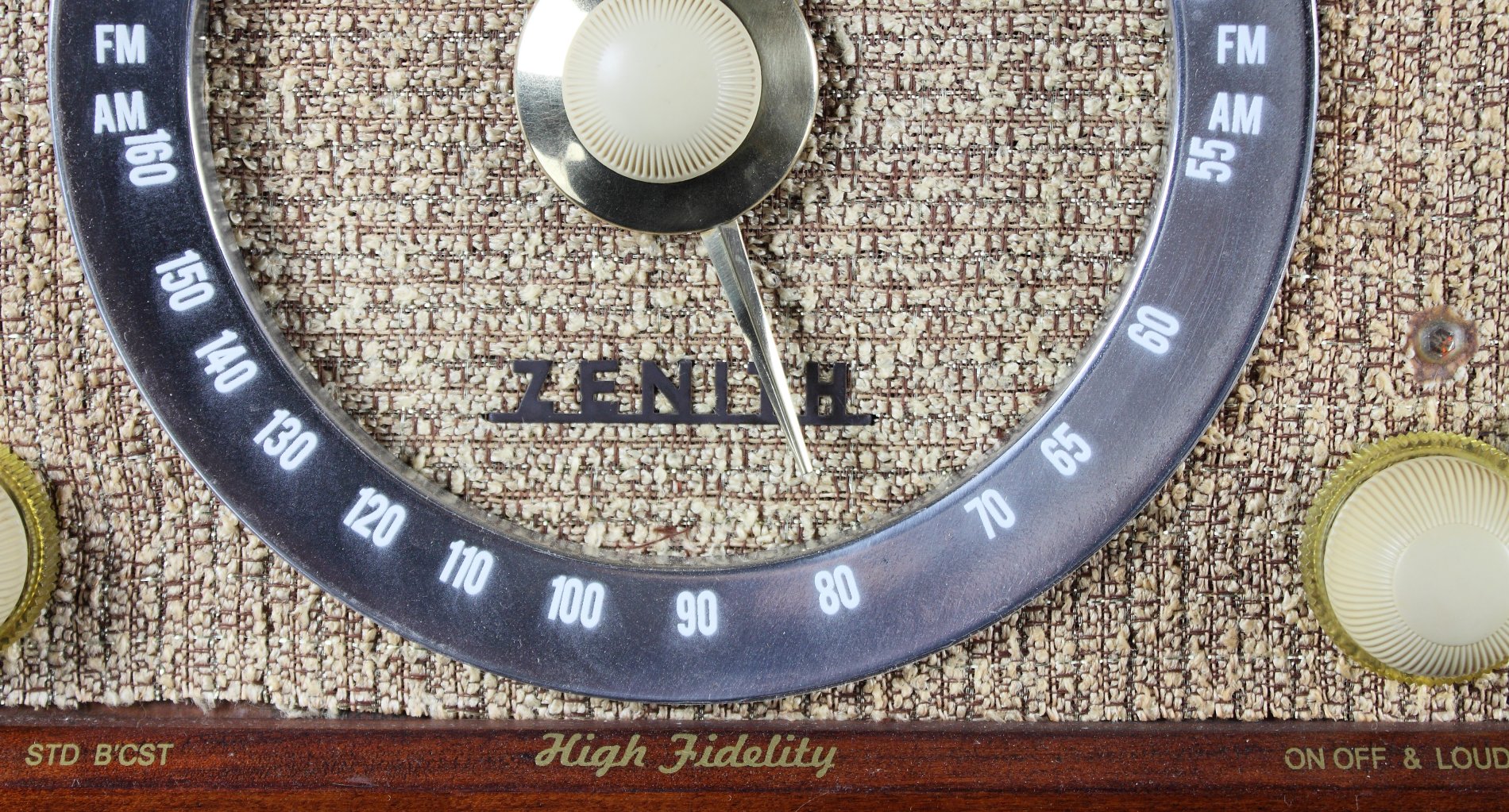 This device uses a loaded antenna on the rear panel.
It's sufficiently efficient but extremely directive, so the position of the radio impact on the quality of reception.
The back panel is prepared to connect an external antenna.
In this case the reception would be perfect.

The controls, as usual on the American radios, are reduced to the essential elements.
The light knob on the left is the band switch.
It has three positions:
FM without AFC (Automatic Frequency Control)
FM with AFC (Automatic Frequency Control)
Medium Waves (Standard Broadcast)
The coaxial golden knob controls the tuning.
The right knob is the power switch and volume control. 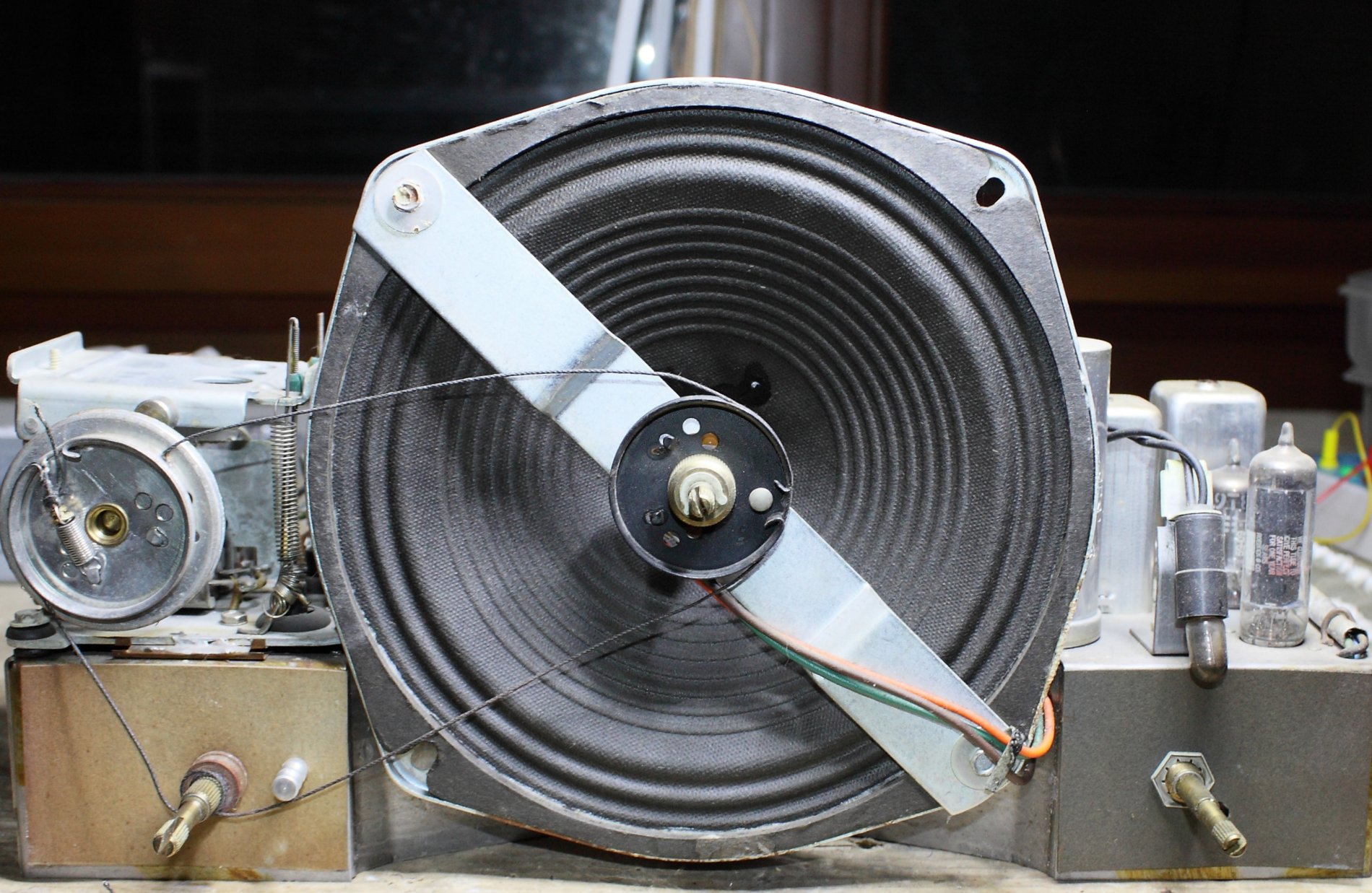 A 14 cm, very performing loudspeaker and two electrostatic loudspeakers were used.
The audio spectrum for FM broadcasts is sufficiently reproduced.

Of course, the deep bass and brilliant treble of the radios with 4 or 6 loudspeakers are missing, but the reproduction, enhanced by the wooden cabinet, is very pleasant and balanced.

On the rear side, the Radio / Phono switch is very interesting.
It is used to switch the listening from the radio to that of the Phono input.
RCA socket for the Phono input.
Classic inputs for antenna and for the ground. 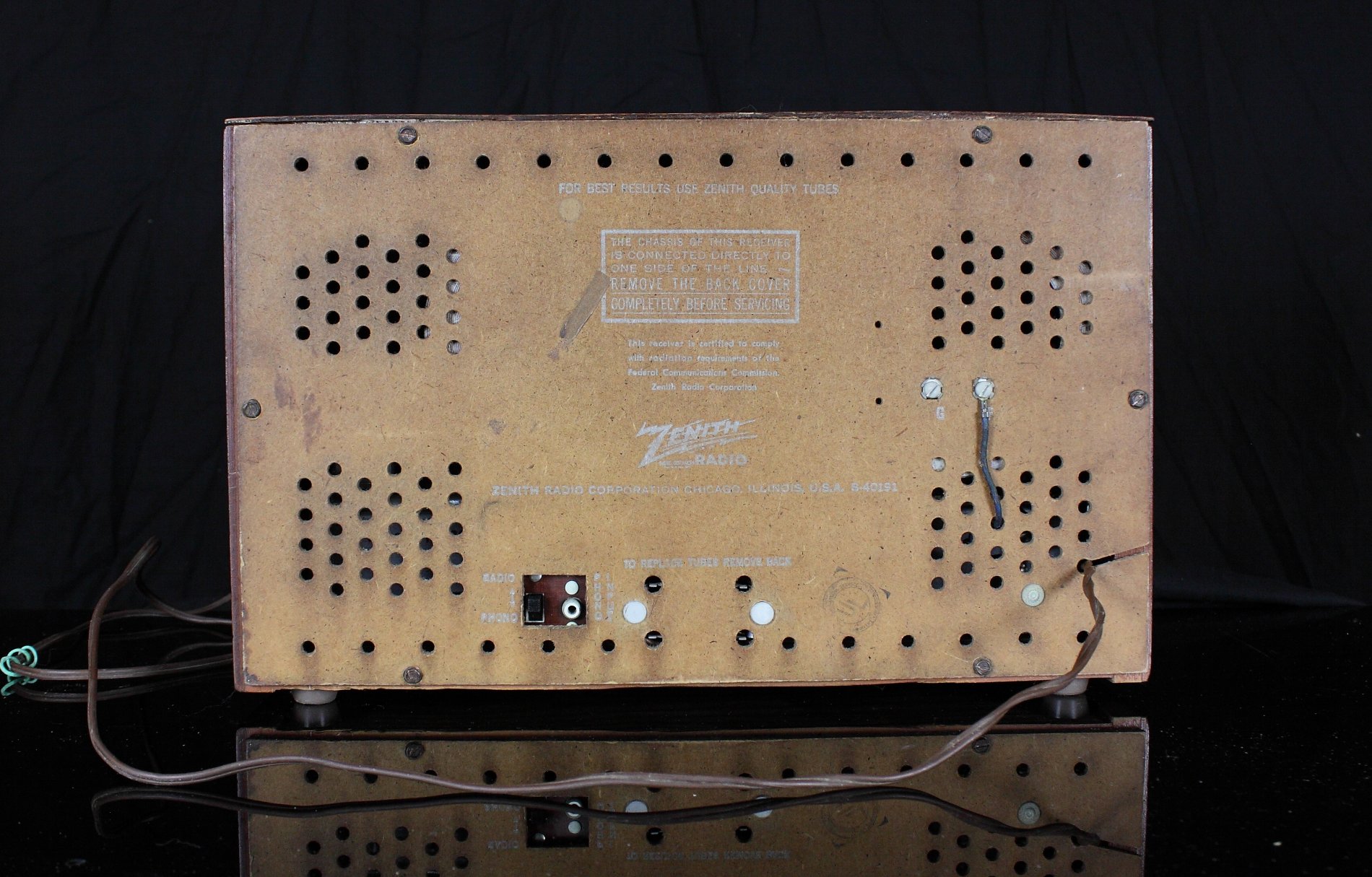 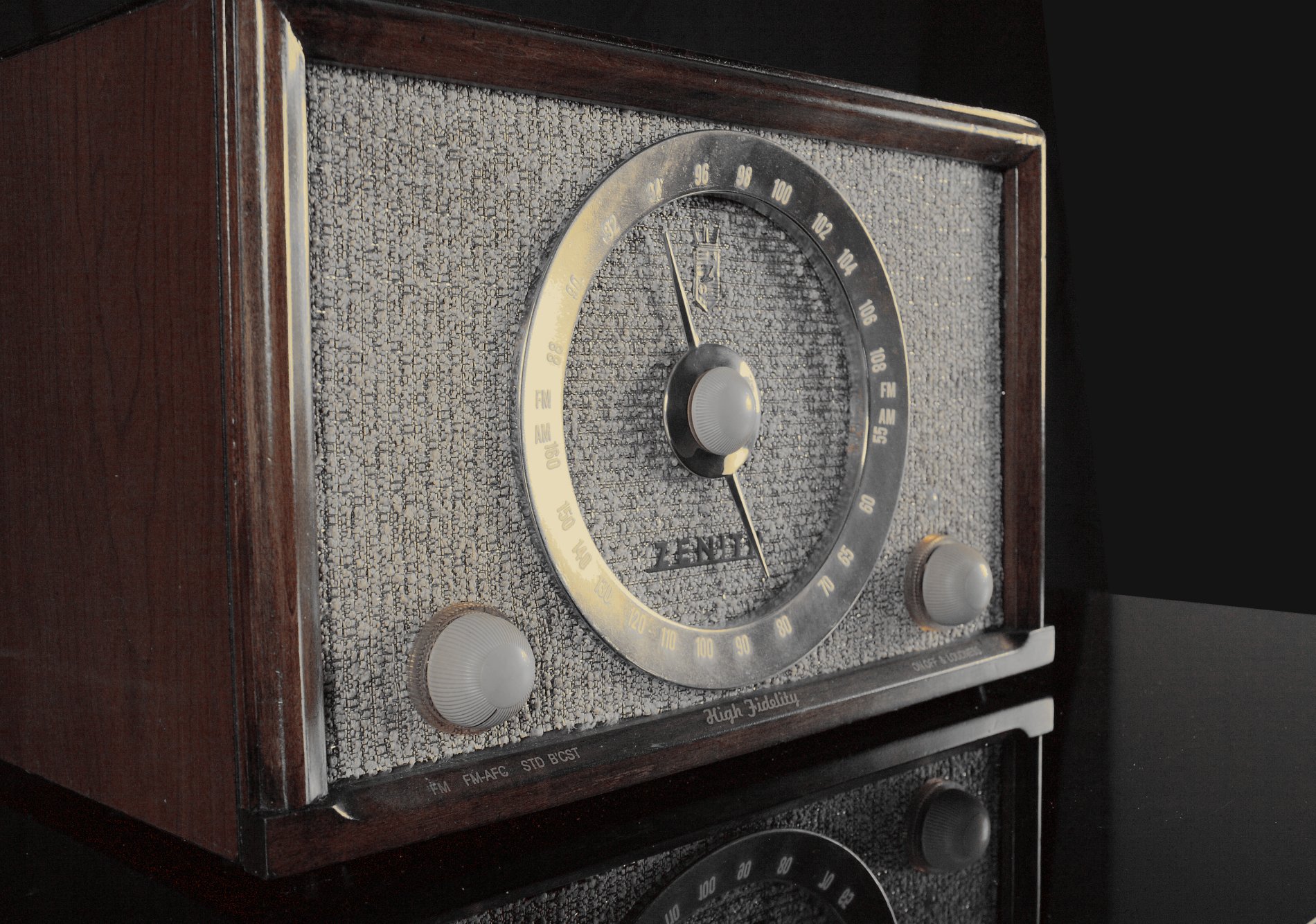