This is a really special review. In fact, the device under test is not only one of the best tube stereo receivers built in Germany in the 60's. Not only is the device that has a shocking design, modern and rational than the other equipment of the time. But this device it has been improved by us in its essential points. The result is spectacular.

But let's start from the beginning. The receiver section represents the utmost of Braun tube production. It belongs to the class of biggest German receivers such as Telefunken Opus 2550, Nordmende 3004, Graetz Stereo Unit 250, the Saba Studio I etc.

Main feauture of this device is the simplification of electric circuits (today is pretty self-explanatory, but in 1961 it was considered a remarkable feature). Differently from other devices the Braun’s Negative Feedback is reduced to a single resistance (highlighted in red) aiming at a low distorsion and an excellent musical transparency.

The sounds control circuit is canonical: a very efficient and balanced Baxandall circuit (highlighted in yellow). It allows the sound control without changing the signal’s phase according to potentiometers.

The Loudness circuit (highlighted in green) is extremely simple and studies for a correct emphasis of low frequencies. Sound quality is as good as Telefunken’s, Nordmende’s, grundig's and Graetz’s of the same level, more refinement maybe.. You will definitely need high-efficiency loudspeakers. This enhanced device is valuable for its breathtaking design and for its performance both.

-FM frequency range widened from to 88 up to 104 MHz.
- New vintage turntable with anti-skating and cartridge weight regulation.
- Ultra noiseless MPX decoder embed.
- Output stages with noiseless resistors.
- Bluetooth receiver embed.
In no other place is there so much

- FM frequency range widened from to 88 up to 104 MHz - The tube radios produced in Germany in the years 50/60 are famous worldwide for their excellent sound quality, the beauty of their furniture, their strength and for their construction standards without compromise. Unfortunately the FM band extending from 87.5 to 100 MHz for which are scarcely usable in most cases. After careful study and a lot of tests we were able to obtain a frequency range by some units from 88 to 104 MHz. We have also reconstructed a display exactly identical to the original, made with the same materials and the same techniques, but with the new frequency range. The result is perfect. An original device, but with the ability to listen most stations in any country.

- New vintage turntable with anti-skating and cartridge weight regulation - The turntable originally installed on this beautiful machine is really inadequate. In 1962 you could find much better. But for reasons of space, aesthetics, and I think, also economics, it was installed a BRAUN PC4 model.
The new turntable mounted was produced by Dual and is a very particular model. It has a series of characteristics that have allowed, and made affordable, transplantation.
Compatibility Features:
- Only a few years newer than the Braun
- Quite similar in size to the original turntable.
- Piezo cartridge. So it works perfectly with the Braun preamplifier stage
Improvement features:
- Cartridge weight adjustment
- Antiskating adjustment
It 'been necessary a significant top panel adjustment work, but the result is perfect. It seems born that way.

- Improved amplifier - New high quality Metal Film resistors take a place of the noisy old carbon composite resistors. The old capacitors are completely renewed with very low parasitic losses (ESR). Great attention in the direction of assembly of the components has been used. All the improvements are substantial.

- Ultra noiseless MPX decoder - A MPX decoder was introduced between RF and BF stages. Usually it lack. It's a decoder developed specifically for this unit by a German engineer I work with. The noise level introduced is very low. Crosstalk is perfectly calibrated. With correct receiving conditions the result is an accurate reconstruction of the sound stage. 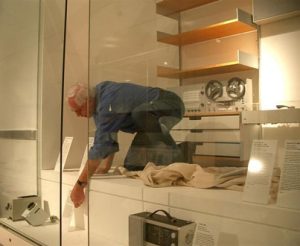 Dieter Rams installing the 'The New Electronics' pavilion for the show "Designing Modern Life" held within the Design Museum in London. 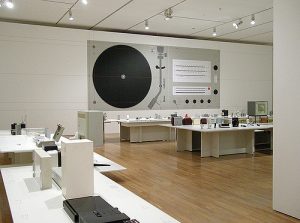 The 1961 is one of those "crossroads" years of the History of Twentieth Century. That year's events will leave a deep mark - for better or for worse - in Europe. The international context has deeply changed form the post-war years. The Nations that allied to defeat the Nazi Germany are by now opposed militarily and ideologically. From the beginning of the year the Cold War influences the whole World. The threat of a new Global War appears at this point inevitable, and the assumptions are all there. In this gloomy climate, a series of crucial events for mankind comes in succession.

In Germany, in particular, 1961 is recalled as "The year of the wall". In few days the Authorities of the German Democratic Republic ordered the construction of a double layered wall and an armed surveillance system to divide East Berlin form the western sectors. Berlin Wall becomes the symbol of a contrast between East and West that gradually involves the whole World, shortly afterwords bringing it to the brink of a nuclear catastrophe with the Cuban crisis two years later.

The contrasting two superpowers involves all sectors of the economic and political life. Scientific research paves the way to the conquest of Space, opening another contest front between USA and USSR to reach the Space. On April 12th, 1961 Yuri Gagarin with the Vostok 1 is the first human being to travel into Space and orbit around the Earth. the United States of America have to acknowledge the huge leap ahead of the technological development of Soviet Union.

It's the intellectuals turn to build bridges between the counter posed parts. 1961 is sure enough an extraordinary year also for Culture: Ivo Andric is awarded the Nobel Prize in Literature; the debate between Positivism and Dialectical materialism divides the Frankfurt School. Karl Popper and Theodor Adorno discuss on the Scientific Research Methodology and give birth to the "Positivismusstreit", namely the clash between Positivism and Dialectical materialism that will influence the future Epistemological debate. The philosophical debate is as such originated by the different ideological visions of Marxism and Positivism. Hemingway commits suicide and Primo Levi writes "La tregua/The Truce", an account of a return to the world of the Living after the hell of Lagers.

The 1961 is moreover the Economic Boom year and the re-construction of the Europe that had been destroyed during the Second World War -that went on during the '50s - forms the paving ground of an unprecedented economic growth period. The welfare society arises, and Germany is in the front line.

German culture rediscovers Weimar. and the representatives of the artistic and theatrical avantgarde, such as Brecht. Walter Gropius, founder in 1919 of the revolutionary tendency of Bauhaus Architecture, establishes in Darmstad the Bauhaus Archive. The Bauhaus, created in 1919, and permanently snapped off with the coming to power of Hitler, is rediscovered in the early '60s by the new generation grown in the harsh postwar period. The rediscovering of the essential lines of the concept of the great German architect is, for the architects of the '60s an Epiphany. The hose and the furniture become the final product of a mental, planning and practical process that combines together technique, ergonomics, simplicity in an totally innovative stylistic merger.

New building techniques concepts enter into the big firms trough by hiring designers, new profession that starts influencing the production lines. With thins new approach the product-objects that are sold are to be seen in a “total” product vision, that is a synthesis of technique and concept.The modern idea of Design as we currently mean it is born.

Braun is one of the first Firms that decides to invest in Design. The best designer was Dieter Rams, who was on apprentice with Otto Apel (Apel was for ten years the assistant of Albert Speer, Hitler's architect, and following that became the Ministry for Armaments and War Production of the Reich. After the war he was hired by the Americans to modernize the construction industry techniques in the USA). Rams started a stylistic research work that brought him to develop the concept of “ergonomic essentiality”, summarized in his aphorism "Weniger, aber besser", that is “Less, but better” or in a wider sense “Less, as long as better”.The influences of the Bauhaus are clear in his works, particularly Peter Keler works, from which he took the concepts of “spatiality” and “linearity” of works as "Wiege (Cradle)", 1922 translating the into simple and elegant lines. 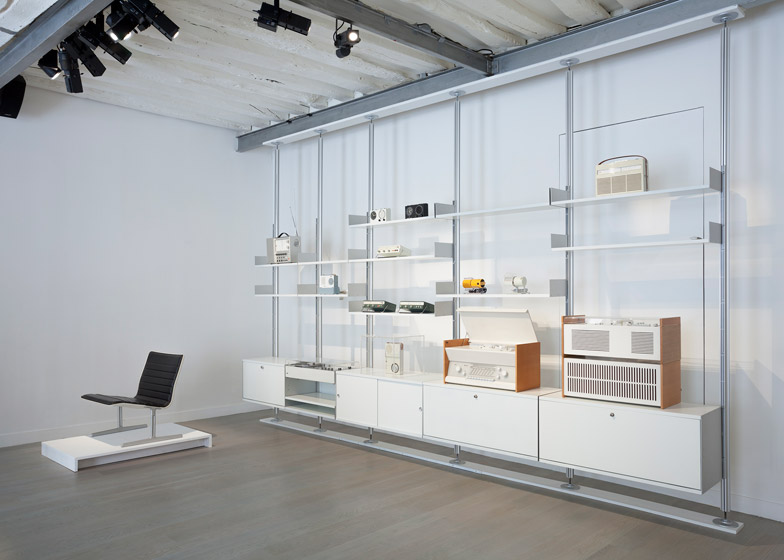 Good Design is Innovative - The possibilities for innovation are not, by any means, exhausted.
Good Design Makes a Product Useful - A product is bought to be used. Good design emphasises the usefulness of a product.
Good Design is Aesthetic - The aesthetic quality of a product is integral to its usefulness because products are used every day and have an effect on people and their well-being.
Good Design Makes a Product Understandable - It clarifies the product’s structure.
Good Design is Unobtrusive Products - fulfilling a purpose are like tools. They are neither decorative objects nor works of art.
Good Design is Honest - It does not make a product more innovative, powerful or valuable than it really is. It does not attempt to manipulate the consumer with promises that cannot be kept.
Good Design is Long-lasting - It avoids being fashionable and therefore never appears antiquated.
Good Design Is Thorough Down to the Last Detail - Nothing must be arbitrary or left to chance. Care and accuracy in the design process show respect towards the consumer.
Good Design is Environmentally Friendly - Design makes an important contribution to the preservation of the environment.
Good Design is as Little Design as Possible - Less, but better. Back to purity, back to simplicity.

The tone control system use Baxandall circuits as described in the initial comments.
The network is logarithmic and also potentiometers, as in the original Baxandall project.
With this circuit the improved symmetry of response curves is worth it. 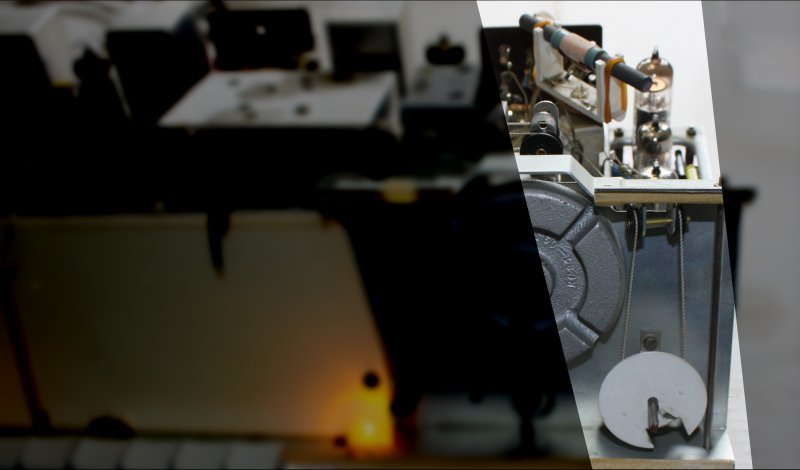 The volume control is on the left (with built-in loudness) and axially.
The next control you meet on the left is the Treble. Then you can see the Bass control knob.
Above you see the Magic Eye (Tuning Indicator)
On the left you meet the band spread dial with the FM, Short, Medium, and Long Wave bands.
Below you see the control buttons. Respectively: Off, Voice, AFC, Stereo/Mono, Turntable, LW, Internal AM Antenna, MW, SW, FM.
On the right the big tuning knob.
Below you see the Volume Control II (Deactivated), the Balance control and the ferrite aerial orientation knob. 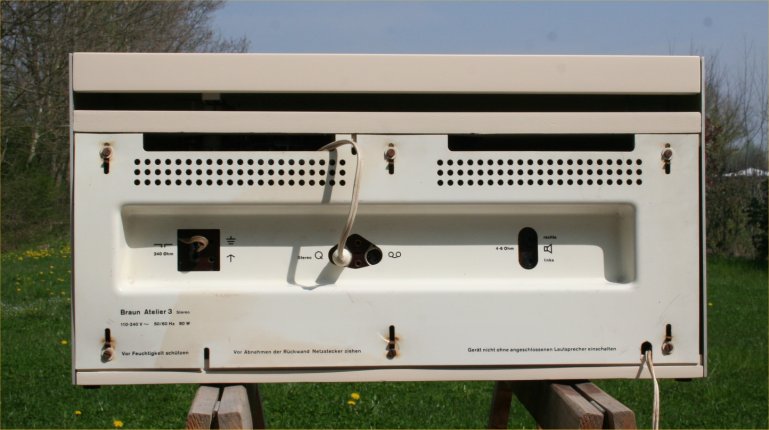 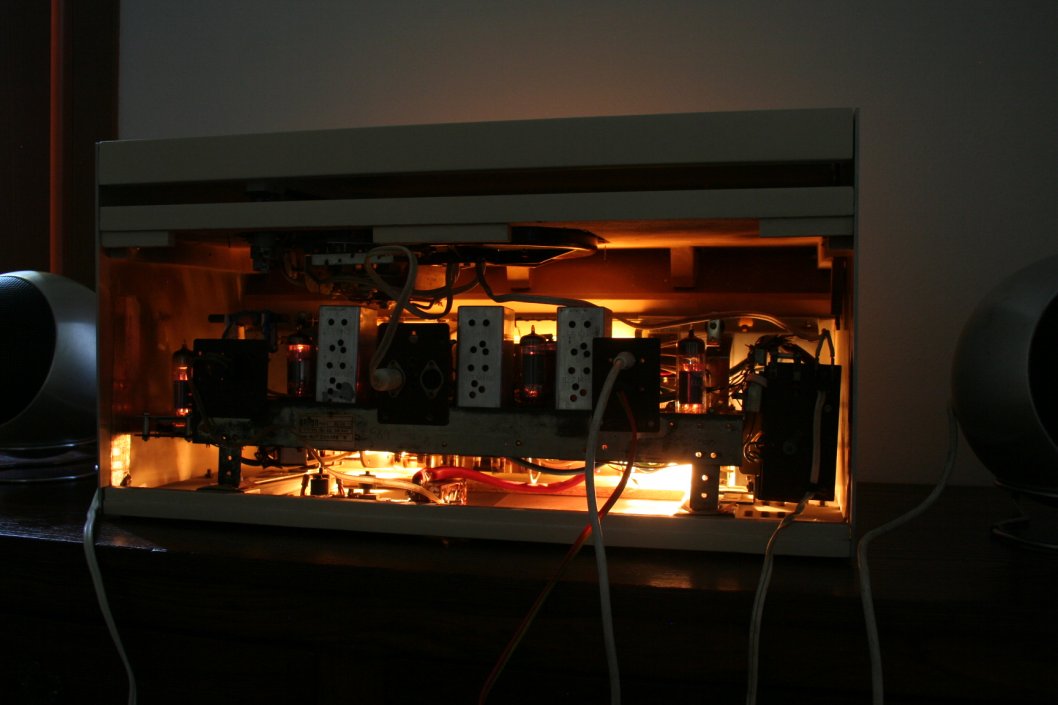