The Grand Prix Moderne Stereo 608 is the first stereo receiver produced by Bang & Olufsen.
From this derives its great historical and economic value.
Produced in 1961, it represents not only an evolution, but a real epochal changeover in the design of the Danish brand.

In the inside, the execution is exemplary. The cables are well arranged and wrapped in a ligature with waxed string that collects them in a single, very solid body.
The power supply consists of an independent block, separate and far from the amplifiers.
The AM / FM radio section is equipped with a medium-frequency double stage to improve the selectivity of the device.
A section of a ECC83 double triode is used to compensate for the attenuation introduced by the Baxandall tone control section.
Very few radios, even among high-class models, were equipped with a Baxandall circuit for tone control. The builders almost always preferred simpler and cheaper circuits, even if the circuit response were not completely symmetrical.
The two amplifiers, one for each channel, are made of a couple of ECL86s. For a total of four ECL86s.
All are mounted on their own vertical board so that the final valves, the four final valves, are arranged horizontally in order to better dissipate the heat. In this way, in fact, the tubes cool uniformly throughout their length.
The triode sections of the ECL86 ensure phase inversion while the pentode sections are connected in Push-Pull and constitute the outuput amplifier.
The power supplied is approximately 10W per channel.
Everything about this device was based on the search for quality. On the other hand, the B&O was proud to be the official supplier of the Danish royal house.

The results of this excellent project and of the very high quality of the components used in the process are the extreme definition and the sweetness of reproduction.
I believe the Grand Prix Moderne Stereo 608 is especially suitable for recordings with voices or solo instruments.
New Age and electronic music is reproduced with great satisfaction.
The fact that this warm and precise sound is played by a fascinating and rare machine from the 60s just complements the invaluable magic.

The sweetness this machine impresses me with makes me think that it might be possible to use it in music therapy or sound baths. Although for this purpose the use of live instruments is unsurpassed.
But this is a complex and controversial topic and it will be the subject of in-depth studies and discussions in the future.

The first track of the playlist I chose in order to test this device is Sit tecum timor suus, from Giacomo Carissimi's Historia di Job (Marino 1605 - Rome 1674).
It belongs to  the musical genre called Oratorio, and in particular of the Oratorio in Latin and with a biblical subject, of which Carissimi is one of the greatest exponents.
This musical genre has very ancient origins, as it comes from Passions and Mottetti. This is very interesting, because being detached from the liturgical function it exalted the practice of music for the purpose of spiritual elevation. Music as an instrument of diffusion of elevated principles was strongly pursued by Filippo Neri who, similarly to the Lutheran rite, intended to bring the evangelical message closer to the people.
Going back to Carissimi, chapel master in the Basilica of Assisi and then choirmaster in the Germanic College of St. Ignatius of Loyola in Rome, in the Historia he uses both monody and polyphony, emphasizing, according to some critics, the expressive power of the work. From the manuscripts it appears clear that the instrumental element is the pipe organ, rarely accompanied by bowed or wind instruments.
After Carissimi, the Latin Oratorio will lose importance while the vulgar Oratorio will continue to be practiced.
In Naples, Alessandro Scarlatti writes La Vergine Addolorata, a mature work with alternating refrains, arias and instruments that accompany the recitative. This use of the orchestra brings the work closer to the genre of drama. The second track of the playlist is drawn from this wonderful Oratorio.
In Venice the Oratory, clashing with the profane melodrama prevailing at the time, is expressed in the works of Giovanni Legrenzi, Baldassare Galuppi and Benedetto Marcello, up to Juditha triumphans by Antonio Vivaldi, which will be discussed in a future review. 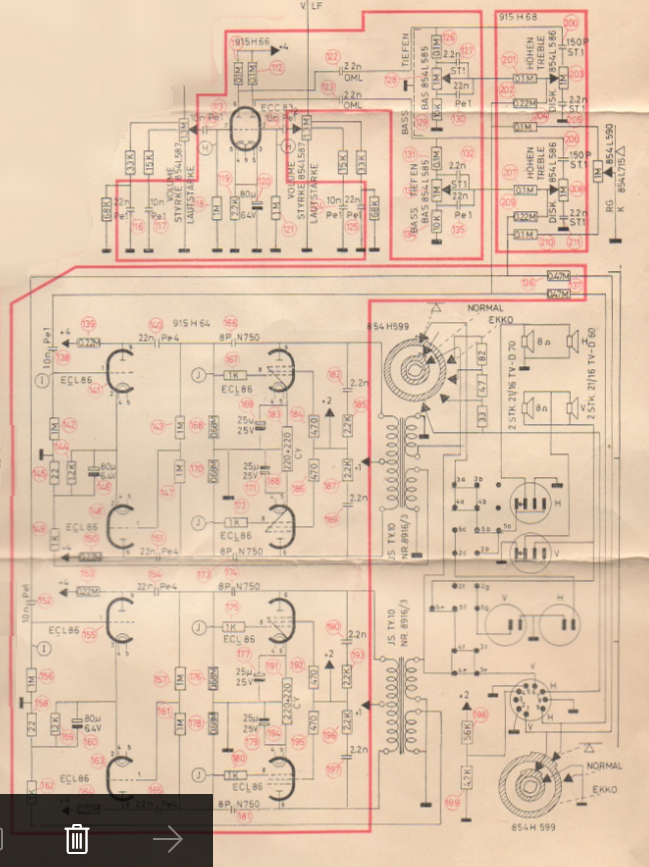 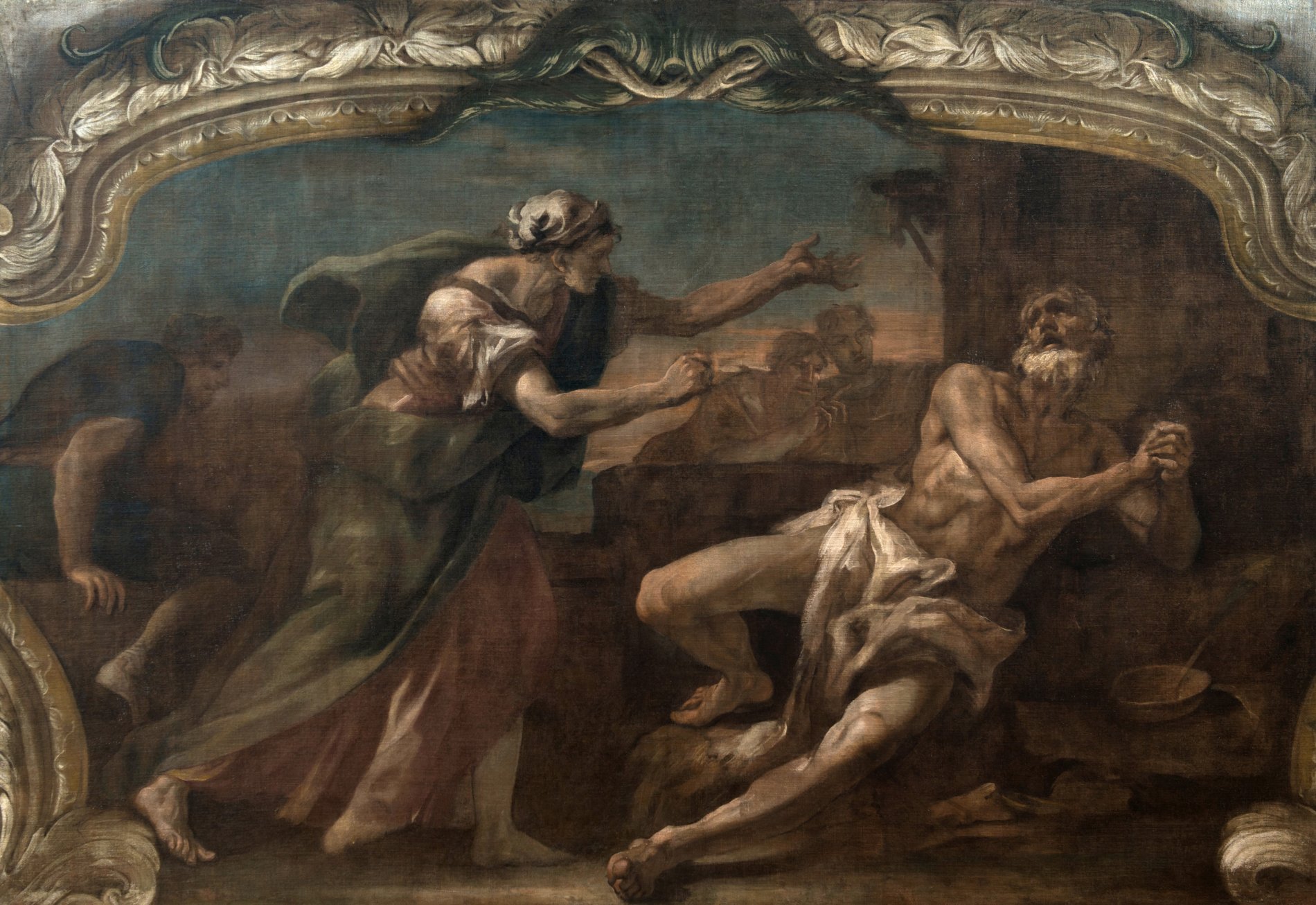 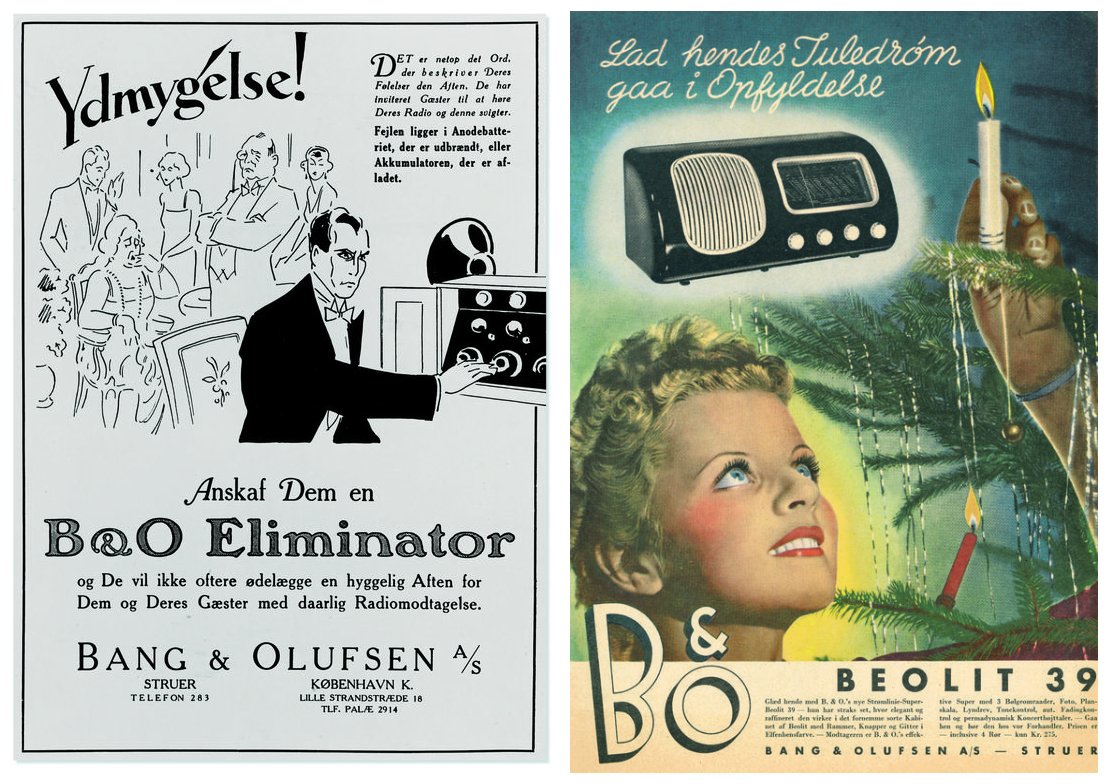 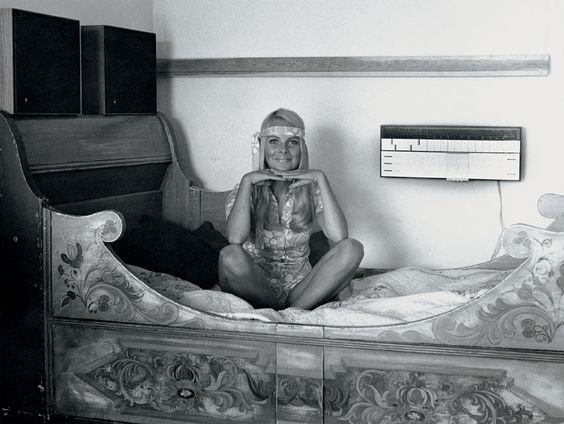 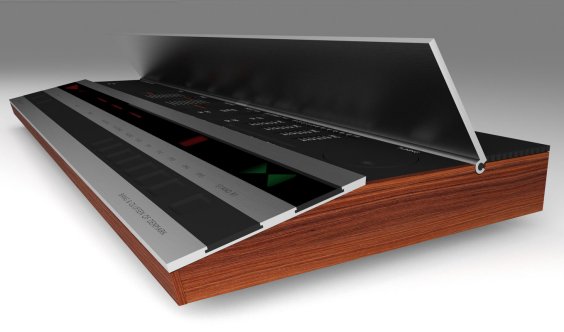 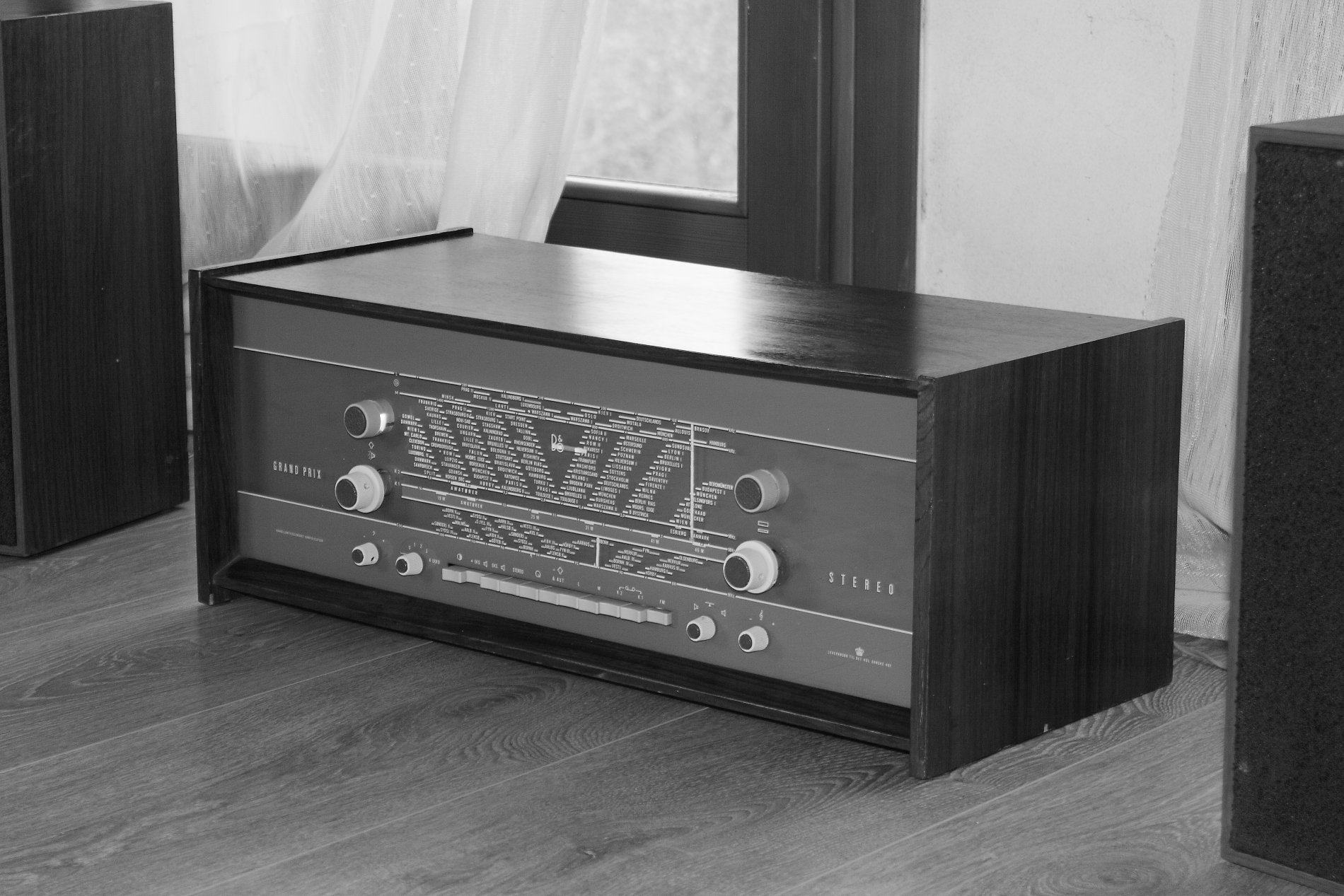 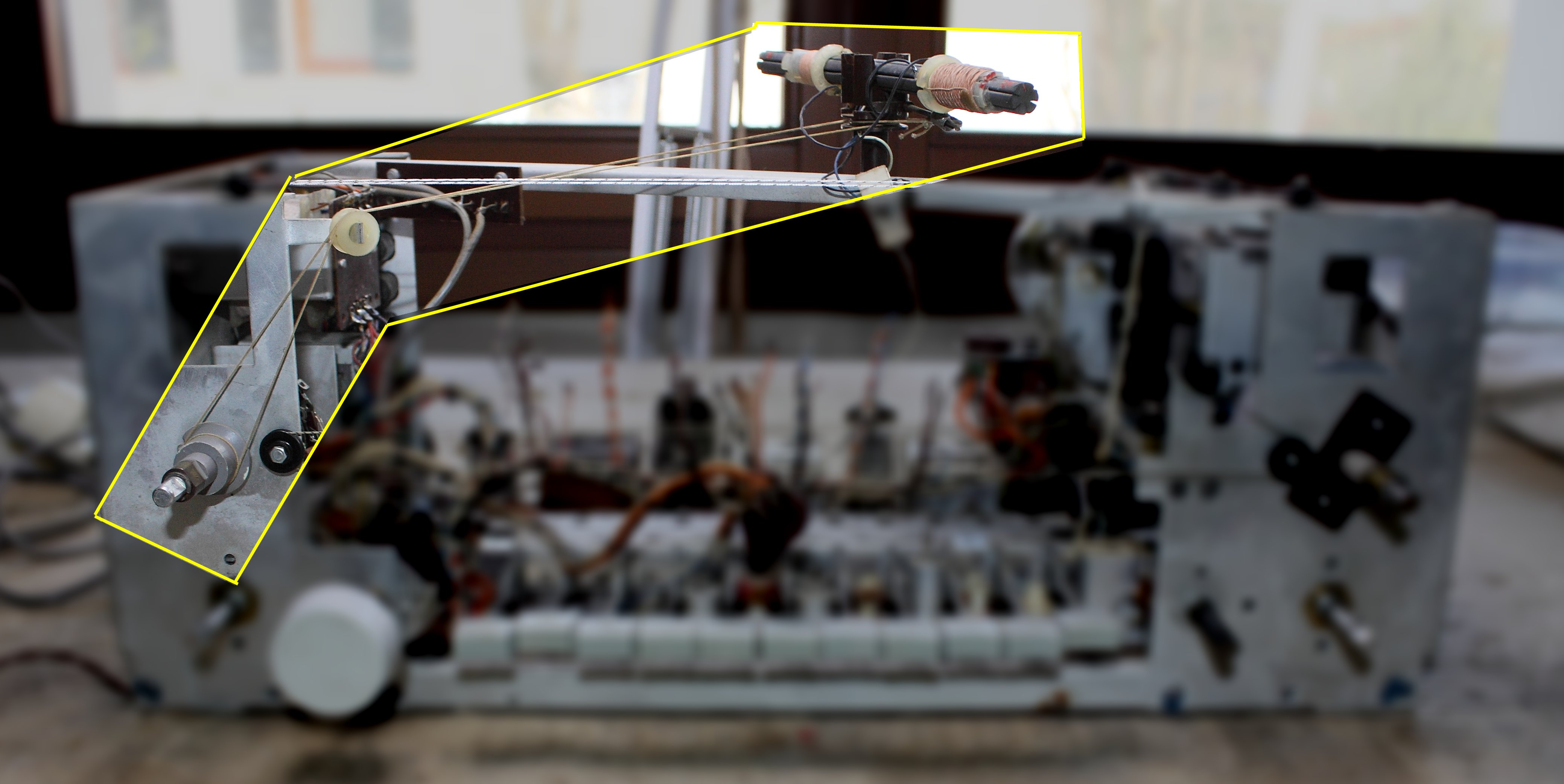 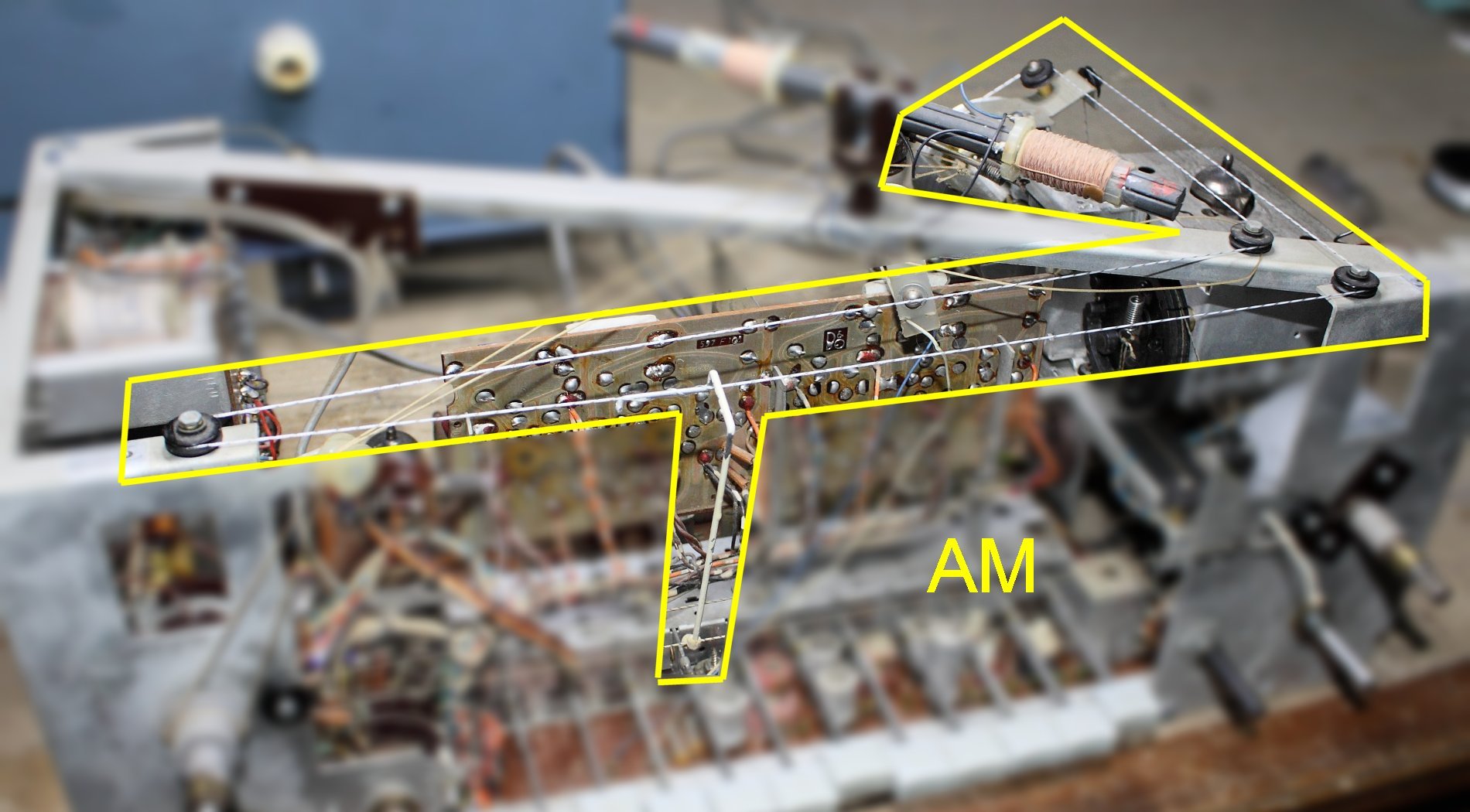 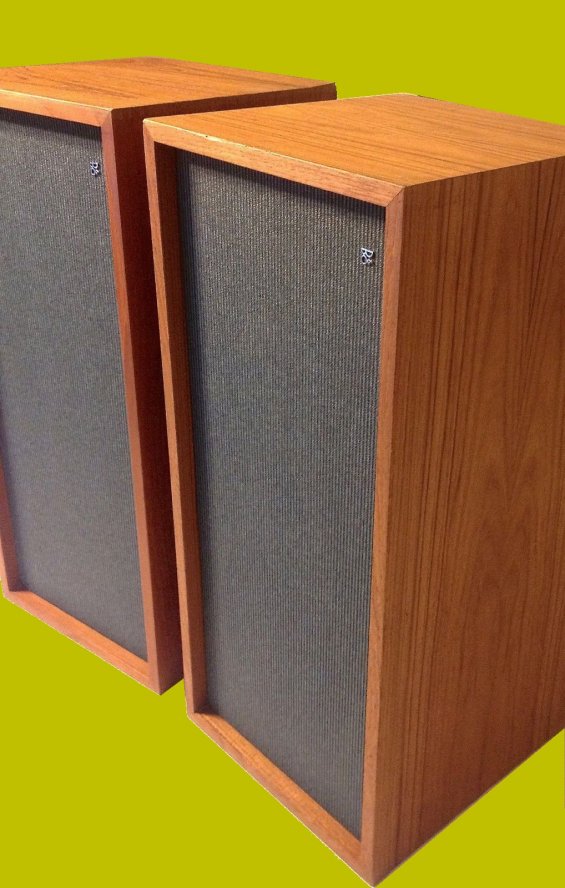 The Bang & Olufsen loudspeakers, designed to be coupled to the Grand Prix Moderne Stereo 608, were the Type S (left) and Type L (right) models.
The recordings I posted on this page were made with Grundig 306A loudspeakers. I chose these loudspeakers for their detail and for the very deep bass they can express. 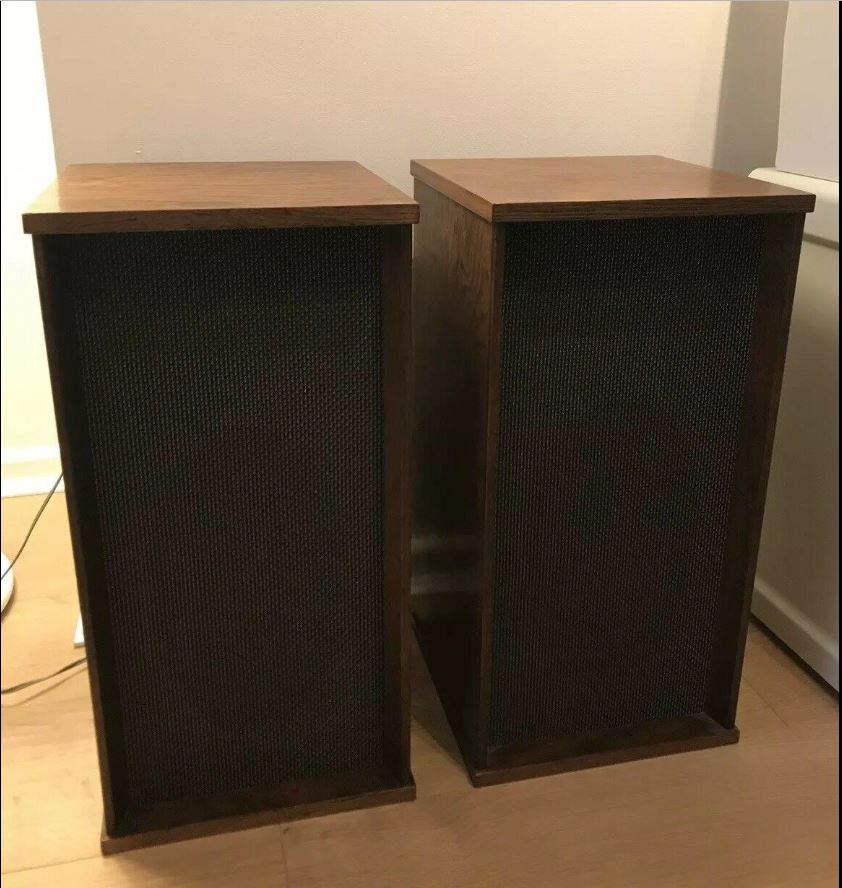 The front side can be imagined as divided into two horizontal sections.
In the upper part, the first knob is that of the volume with built-in loudness.
Coaxially, the ferrite antenna control knob can be seen.
Then, we see the AM scale for short, medium and long waves. The FM scale.
In the center we find the Magic Eye, which indicates the best tuneing of the different stations.
On the right of the dialglass, then, we see the two separate tuning controls.
The rear knob, bigger, controls the FM band.
The frontal knob, smaller, controls the AM bands.

In the lower section we find in the order: 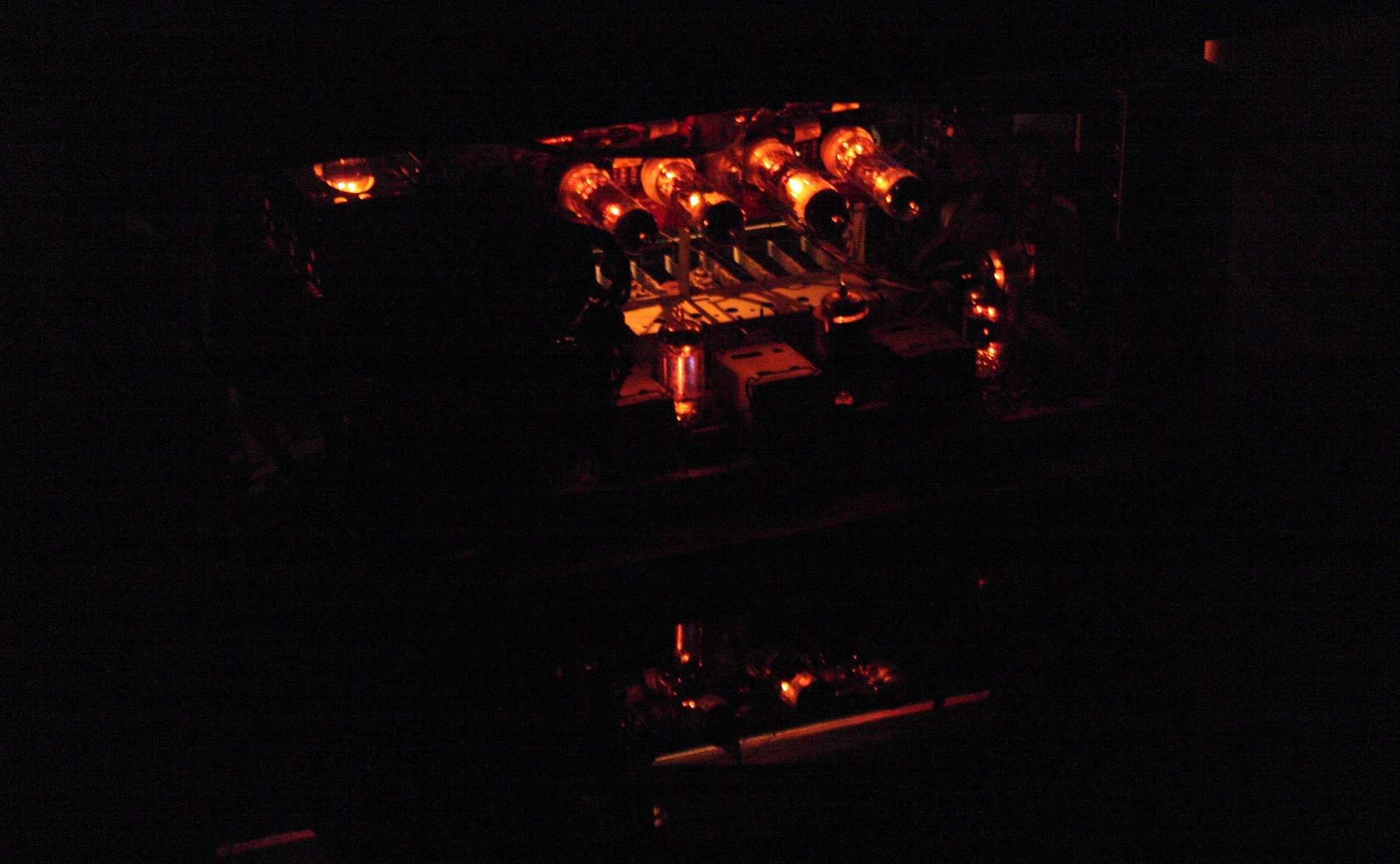 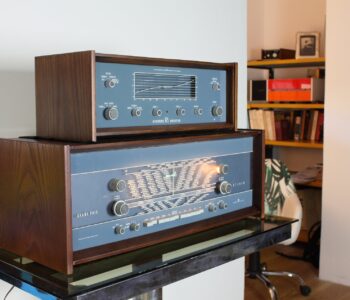 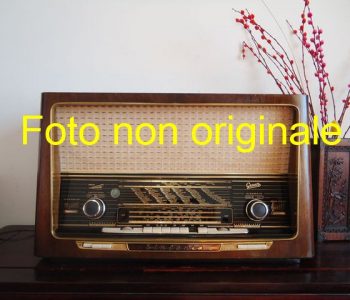 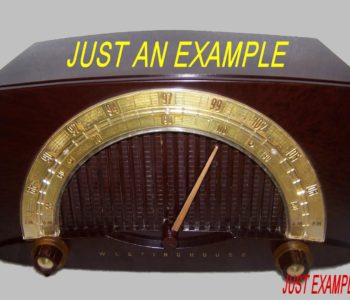 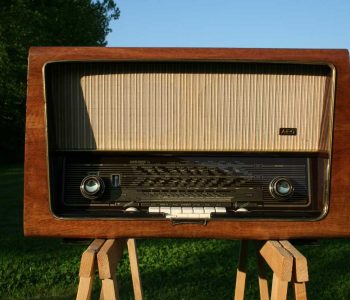 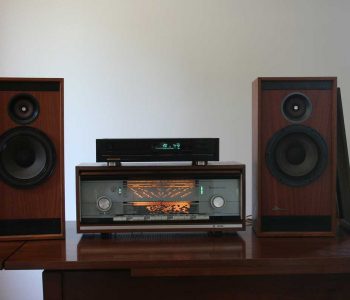