Brionvega is certainly the italian elecronic equipment brand that the most left a sign into the world design history.
Brionvega masterpiece, the Radiofonografo Stereofonico Brionvega RR126.
It has been projected by architects Giacomo and Achille Castiglioni in 1965.

The RR 126 has been projected as “stereophonic high fidelity device”.
When it appeared on the market, it was welcomed with a big selling success.
It was available in white, lobster, and wood. The white one was the most requested.
It has been a revolution in the design of the home devices for the listening of the music.
Thanks to its modular structure, that allows to put the speakers on the top of the central body so that a cube is shaped, or on the side of the central body so that a parallelepiped is shaped.

Thecnically the circuit is typical, except for what refers the stereo decoder that is preamplified alone.
The original sound of the bi-conic speakers is a little defective in the high and low part of the range, and a little bit enclosed.
For this reason we always suggest in our refurbishments an internal adjustment to the speakers, introducing a little mask that bends the loudspeakers towards the center to focalize better the listening, and also the radical replacement of the original loudspeakers with modern 3-ways ones, projected to work in a limited-dimension sounding board.
The aesthetics remains absolutely unmodified but the sound changes deeply, widening, opening and getting significantly more precise.

Almost all the white or lobster models, when they come to us, are spotted, yellowed and with damaged edges.
For this reason we are equipped for the whole double varnishing (white and dark brown) and for the serigraphy of all the incriptions, anterior and posterior.

These incredible refurbishments are documented by pictures at the bottom of the page in the dedicated section.

Breaking news: the RR formerly owned by David Bowie has been auctioned in London for 324.000 pounds. 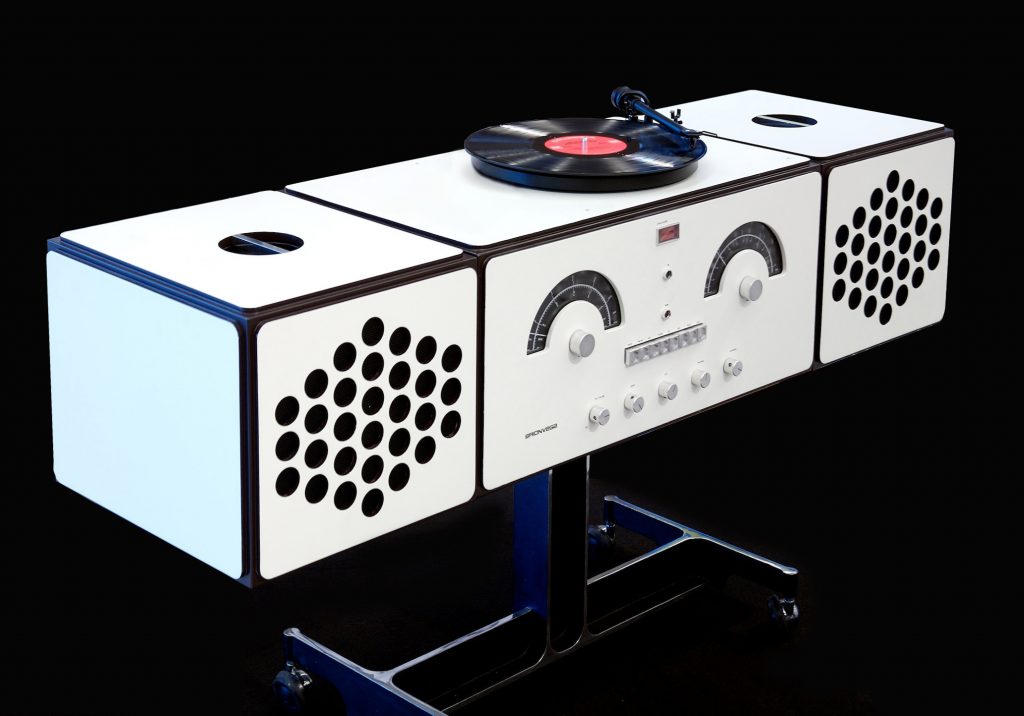 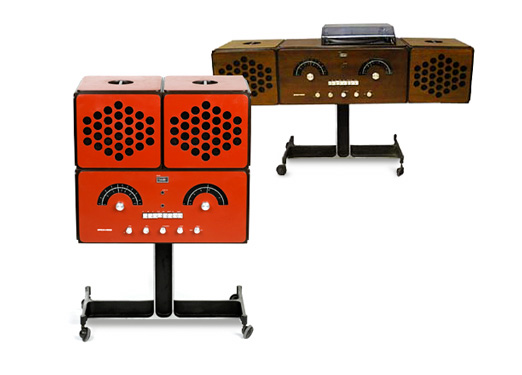 The kind of the loudspeakers is changed.

- Improved loudspeakers - The modest bi-conic original loudspeakers can be replaced, with pertinent changes, by brillant 2/3 ways loudspeakers with a significant improvement of the device's sounding performances.
The adjustment is completely invisible. 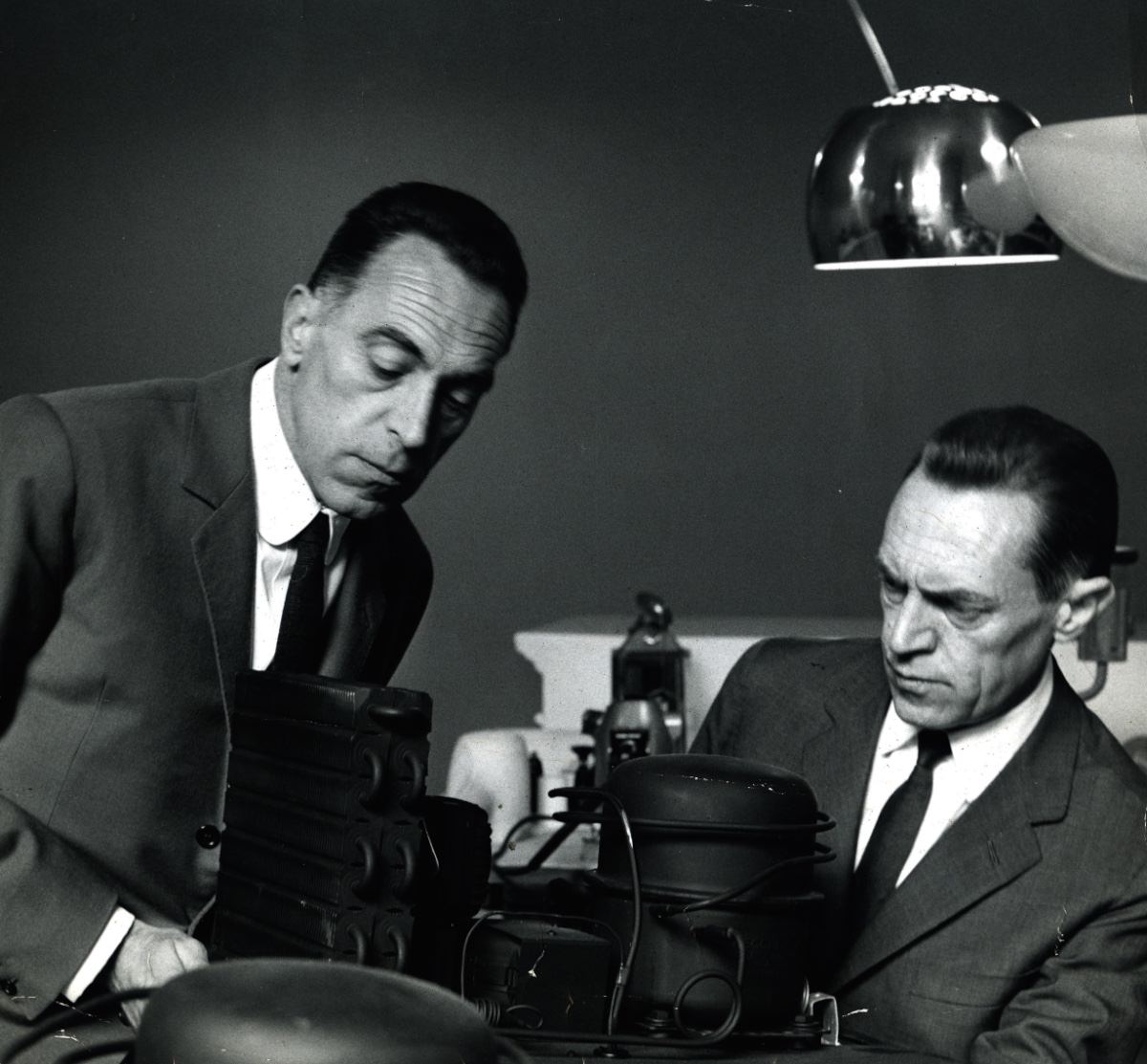 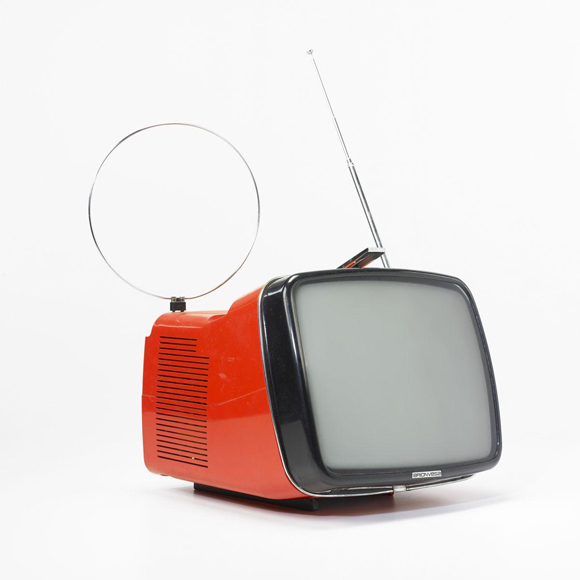 In 1945 in Milan, Giuseppe Brion and the engineer Leone Pajetta founded the B.P.M. (Brion Pajetta Milano), electronic component production company.
At the beginning of the 50s the company specialized in the production of radio devices and becomes the Vega B.P. Radio.
At the beginning of the 60s specialized in the production of Tvs and becomes Radio Vega Television.
In 1963, the company takes the definitive name of Brionvega.

Brionvega since ever had world-known designers and produced objects that are exposed in the most famous international museums.
Among the firsts designers Zanuso and Sapper, 1964, that projected the portable TV Algol 11 (picture on the bottom left) and the radio TS 502, the “cube” (picutre on the bottom right).
In 1965 the Castiglioni brothers (ppicture on the top left) signed then the Stereophonic Radiofonografo RR126.
In 1970 the designer Mario Bellini traces the shape of the stereo system “Totem” (picture on the top right).
In 1992, the company is sold by the Brion family to the Seleco.
In 1997 Seleco goes out of business and Brionvega, controlled, does so.
In 2004 SIM2 Multimedia has acquired the part of the Brionvega company dedicated to the radio production.
In 2010 SIM2 Multimedia acquires also the TV sector of the historical italian brand. 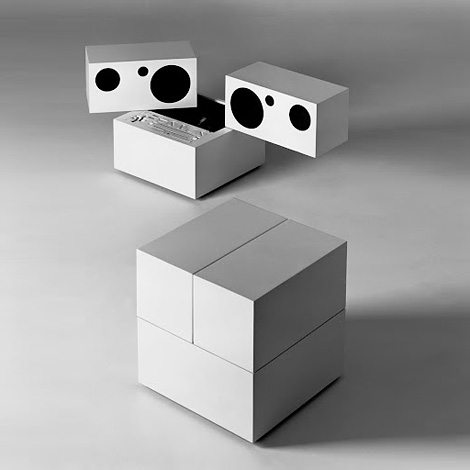 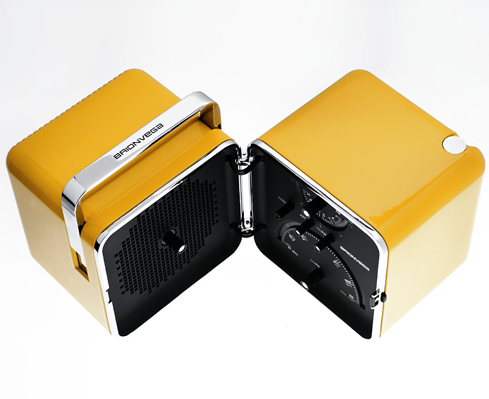 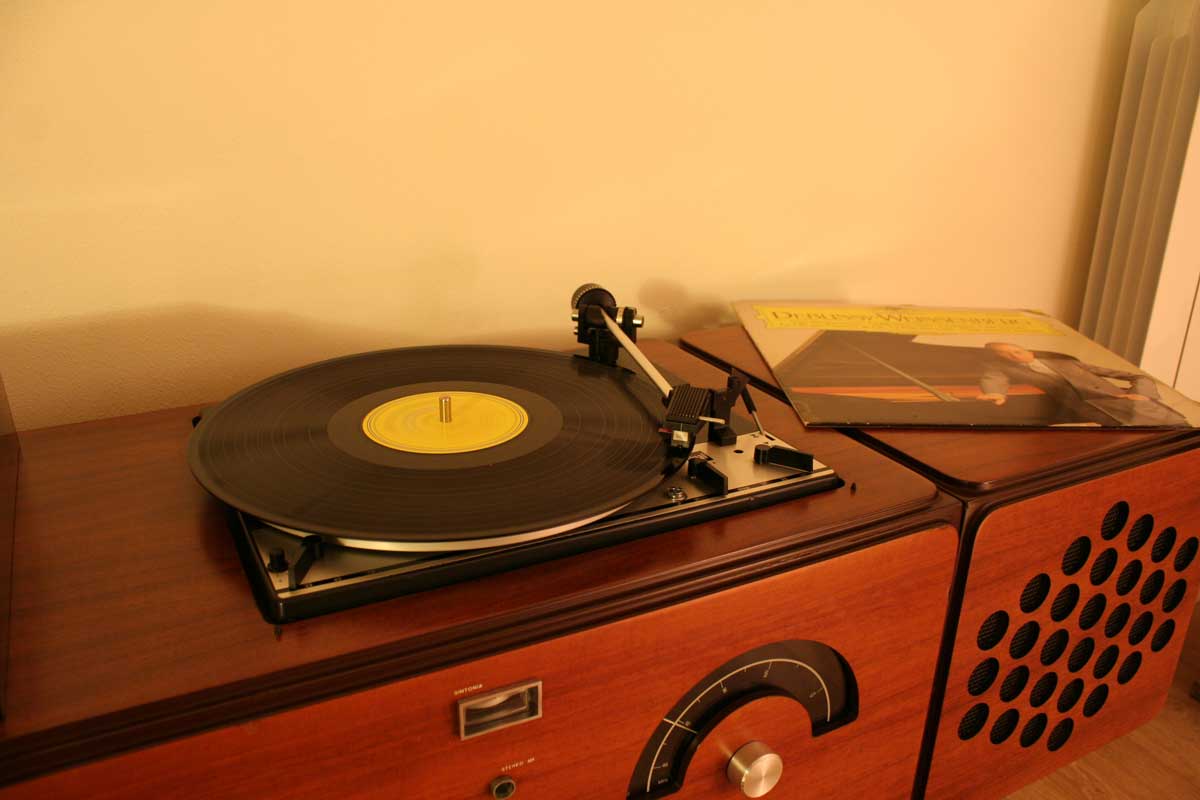 The device is provided of dedicated tuning mechanisms for AM and FM bands.
Even the dial glasses are two, separated and symmetrical for a big visual impact.
Big part of the personality of this device comes from this choice of design.

Starting from the left, on top we find the dial glass of the AM bands and the related knob for the tuning, the strength tuning indicator, the indicator of the stereo station (green), and the power on one (red). Finally on the right we find the FM scale and the related tuning knob.
Below we have the buttons for Long, Medium, Short Waves, FM Mono, FM Stereo, Turntable Mono, Turntable Stereo, AFC, Tape Recorder.
Further below we have the Power On / Bass, Treble, Balance, Volume, Input Level knobs. 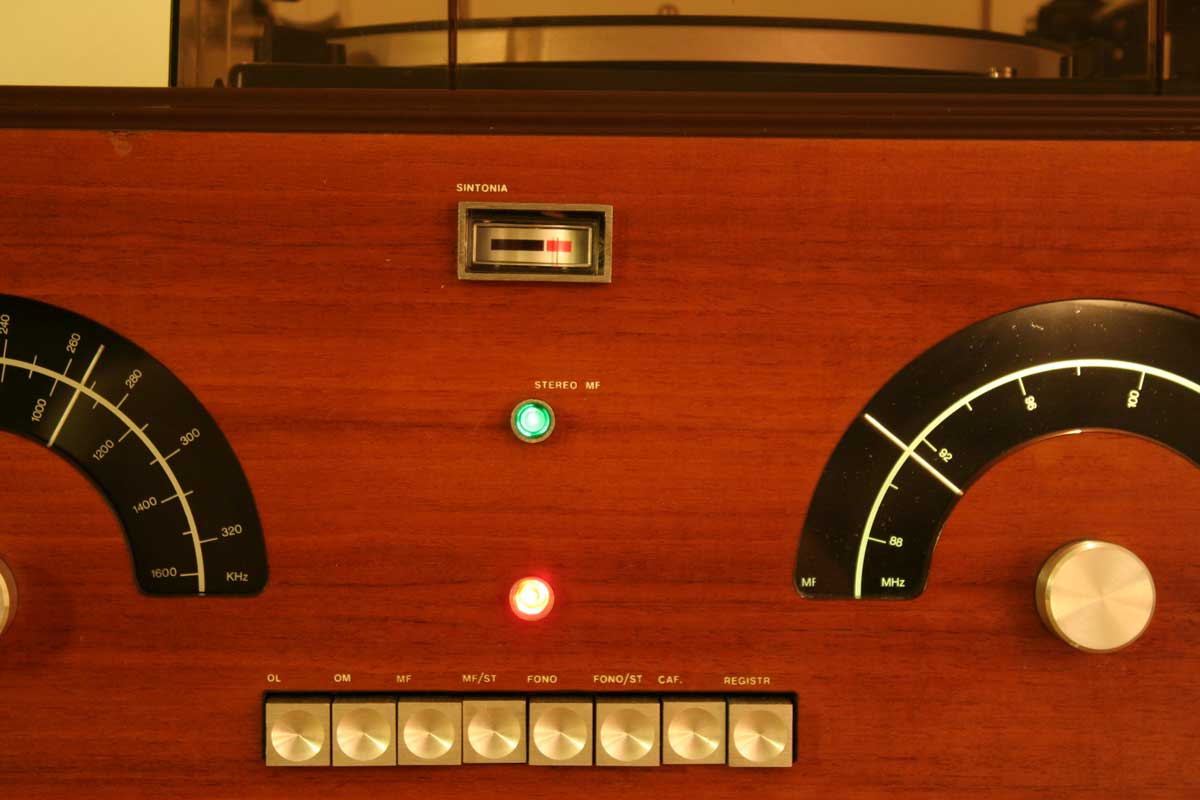 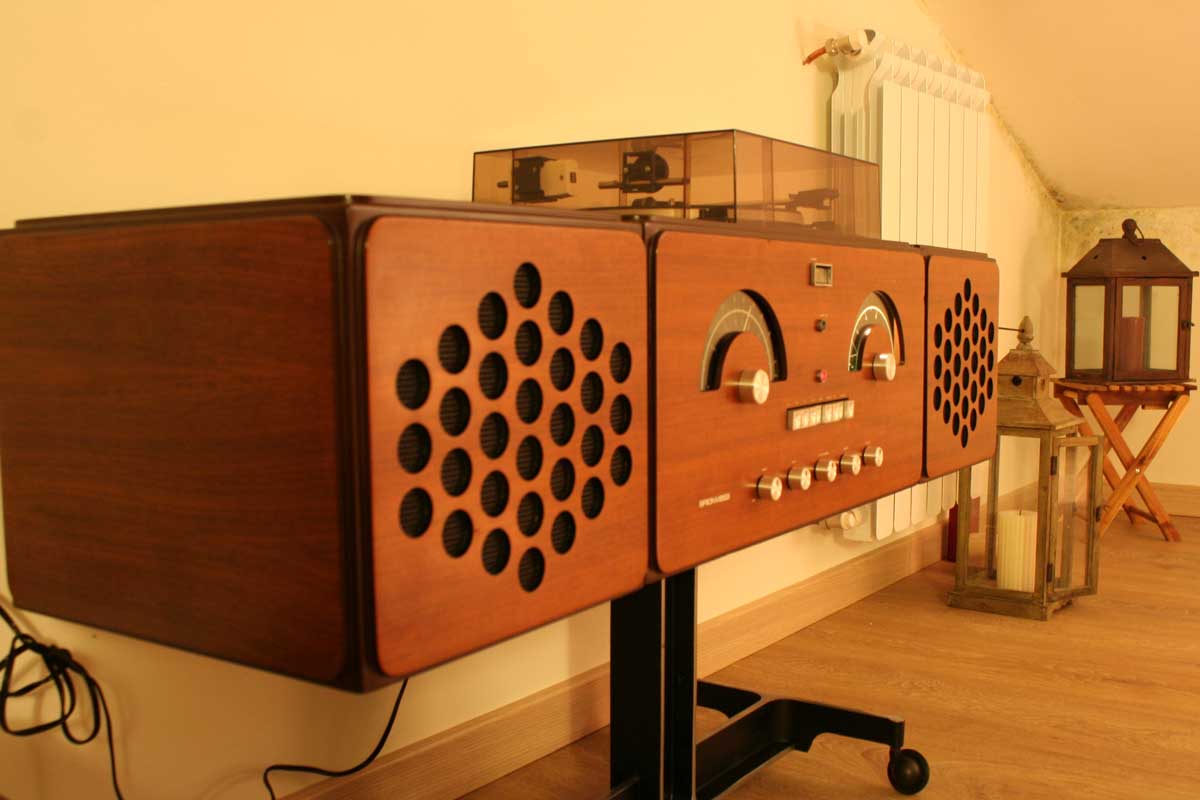 The loudspeakers are two, one per speaker.
The reproduction of treble and basses is naturally not so linear.
For this we suggest, in our refurbishments, an adjustment that leaving completely unmodified the exterior aesthetics transforms completely its sound characteristics. 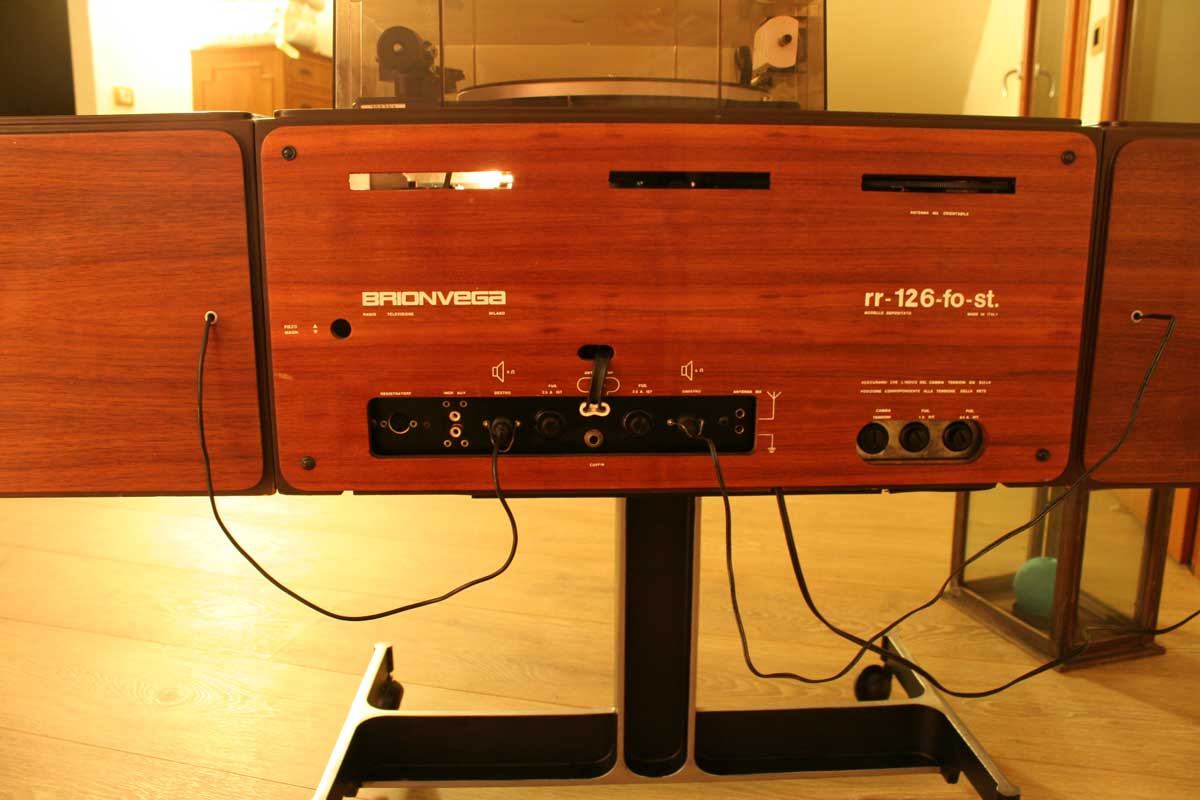 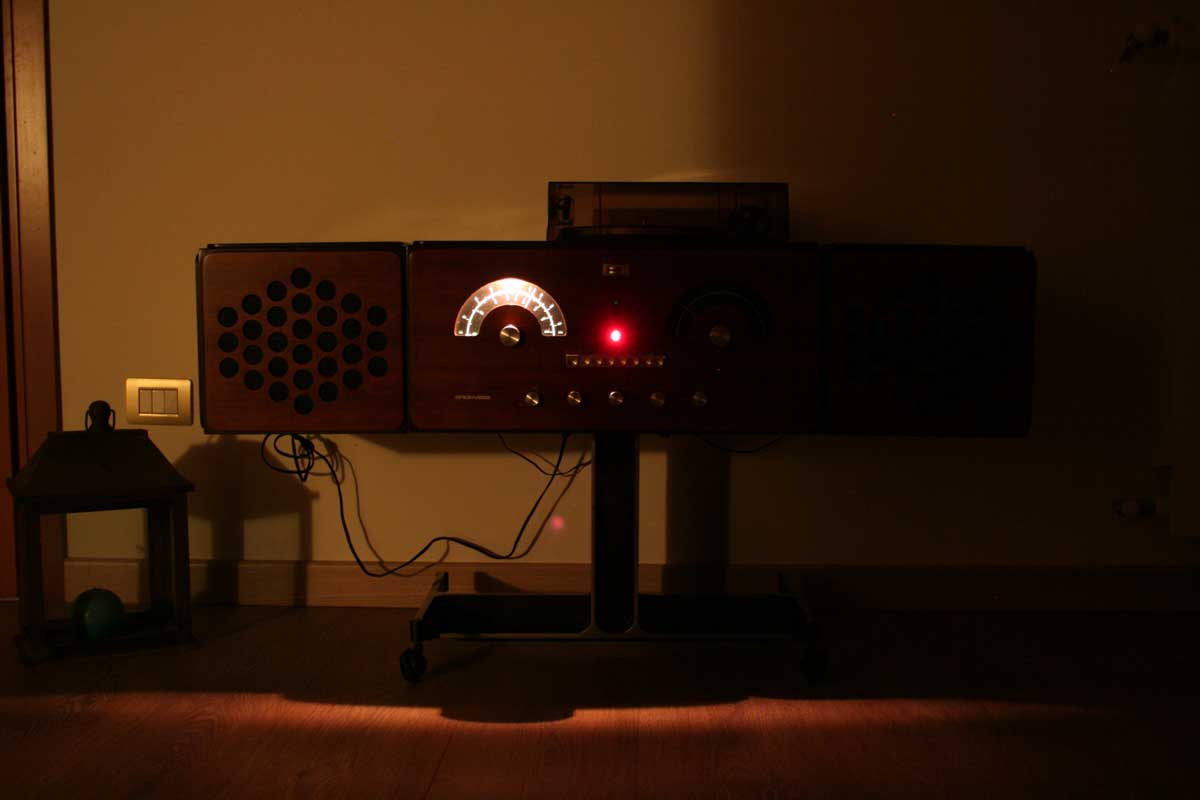