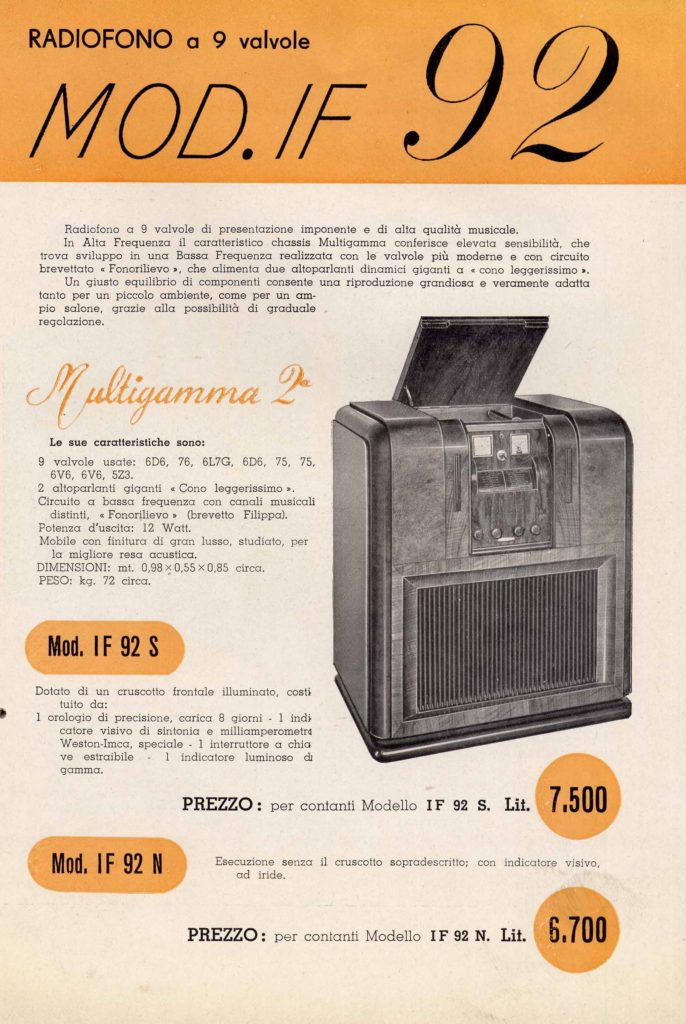 Kingdom of Italy - 1939
The monthly salary of a worker is 250 lire, 1000 is that of a top executive.
Eng. Italo Filippa's IMCARADIO launches the MULTIGAMMA IF92 on the market at the modest price of 7500 lire.
This first information clarifies who the device was designed for and how many items were commercialized.
If there were still some doubts, the commercial of the time reads:
Impressive and of high musical quality 9-valve Radiophone.
In High Frequency the characteristic Multigamma chassis provides high sensitivity, which develops in a Low Frequency realized with the most modern valves and with patented phone circuit, which powers two giants electrodynamics loudspeakers with very light cone.

All IMCARADIO production aims for luxury and exclusive technological refinement, and the IF92 Multigamma is a magnificent expression of it.

The most important feature of this device is the Selection of the 8 bands by a Rotating drum. Registered patent of Imcaradio. Such system will be used several years later by other manufacturers around the world on the most prestigious multigamma models, such as Grundig in its Satellit series, Sony, Panasonic etc.
Different display for each range.

Two Class A power stages, each composed of a 6V6 which drives its own loudspeaker.

Inside the cabinet there are two chassis, one with the power supply and the other with the section and the two Low Frequency amplifiers.
The cabinet is very sturdy, as it weighs the tune of 70 Kg and no vibrations or resonances, deriving from the two large loudspeakers, are detected. It is covered with refined high-quality wooden compositions.

When the device is integrated with modern information-transfer technology, via cable or Bluetooth, the sound is magnificent.
Listening on this radio to old 78 rpm records is a real blast from the past. A past that some of us relive, but that most get to know for the first time. And it is a pleasant meeting with our roots.

The songs of the test playlist were chosen with an unusual criterion. I looked for songs that were probably listened to on this radio “when it was still young”. Only the last song is modern and it was included in the playlist in order to enhance the acoustic qualities of this device.
The recording quality of such songs is not excellent, sometimes very bad, but their charm is undeniable. Have a good listening!

The first song, entitled “L'Orgia”, is taken from the collection “Soirées Musicales”. A series of arias and ditties composed in 1830 in Paris by Gioacchino Rossini. It is a series of lovely transpositions of poems adapted to chamber music. Rossini managed to maintain the poetic form, the drama or the joy, by wisely dosing the chromatism and the rhythmic. Small masterpieces.

The second song is the “Tango delle Capinere” composed by Cesare Alberto Bixio on lyrics by Bixio Cherubini, brought to success by Aurelio Cimato, aka Gabrè. The beautiful recording I propose is the one played by Luciano Tajoli. This tango was written in 1928. Just like several songs of the time, it aimed at dignifying the work of the many “blackcaps”, who did the world's oldest job.

The third song is from the “Rigoletto” by Giuseppe Verdi. It is the famous aria “La donna è mobile” interpreted by the great Enrico Caruso. This is a recording from the early 1900s. The work, inspired by the drama “Le roi s'amuse” by Victor Hugo, was meant to be represented for the first time at the Fenice theatre in Venice with the title “La Maledizione” (by Vallier).
But in 1850 the Military Governor Cavalier de Gorzkowski forbade its representation. Even the name of the main character Triboulet, which could recall the ideas of suffering and tribulation, was Italianized in “Rigoletto”. Finally, after several adaptations, it was represented in 1851 and it was a great success.

The fourth piece is “L'Ottobrata”, taken from “Feste Romane” of 1928, one of the most important works by Ottorino Respighi (Bologna 1879 - Rome 1936).
After 1860 there was an opening towards the culture and the music from across the Alps. Before that time, it would have been considered almost a betrayal of the nation. The first great Italian musician sensitive to these new artistic trends was Respighi, who attended the teachings of Rimsky-Korsakof.
The influence of the great Russian master can be recognized in works such as “Le fontane di Roma”, “I pini di Roma” and “Feste romane”.

The last song, among those that this radio has certainly already known, won the Sanremo festival in 1958. “Nel blu dipinto di blu”, sung by Domenico Modugno. An important song in the history of Italian music, which consecrates the advent of the so-called “yellers”, including Tony Dallara, Adriano Celentano, Little Tony, Mina, just to name a few.
It represented a drive towards life for those Italians who, in those years, did not manage to emerge despite the economic boom.

The last song allows, instead, to appreciate the acoustic qualities of the Imcaradio IF92. It is the well-known “Euphoria” by the Swedish singer Loreen.
It is a very beautiful, award-winning song that has sold millions of copies. Very well recorded and arranged. Loreen's voice is fascinating and mysterious. Somehow the song actually reminds of Sweden. 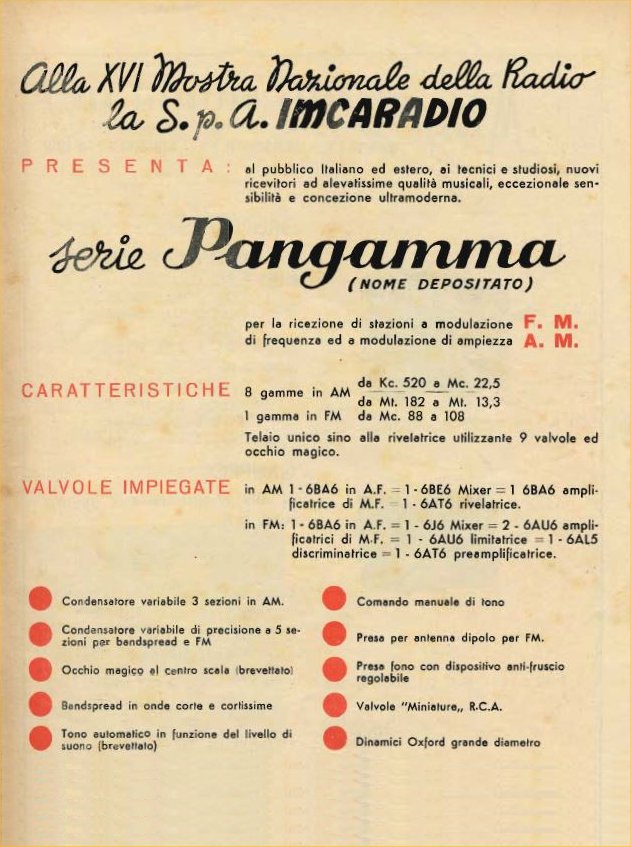 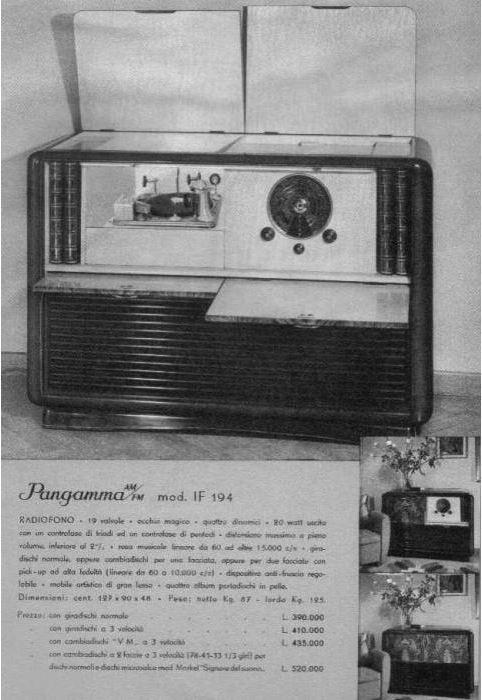 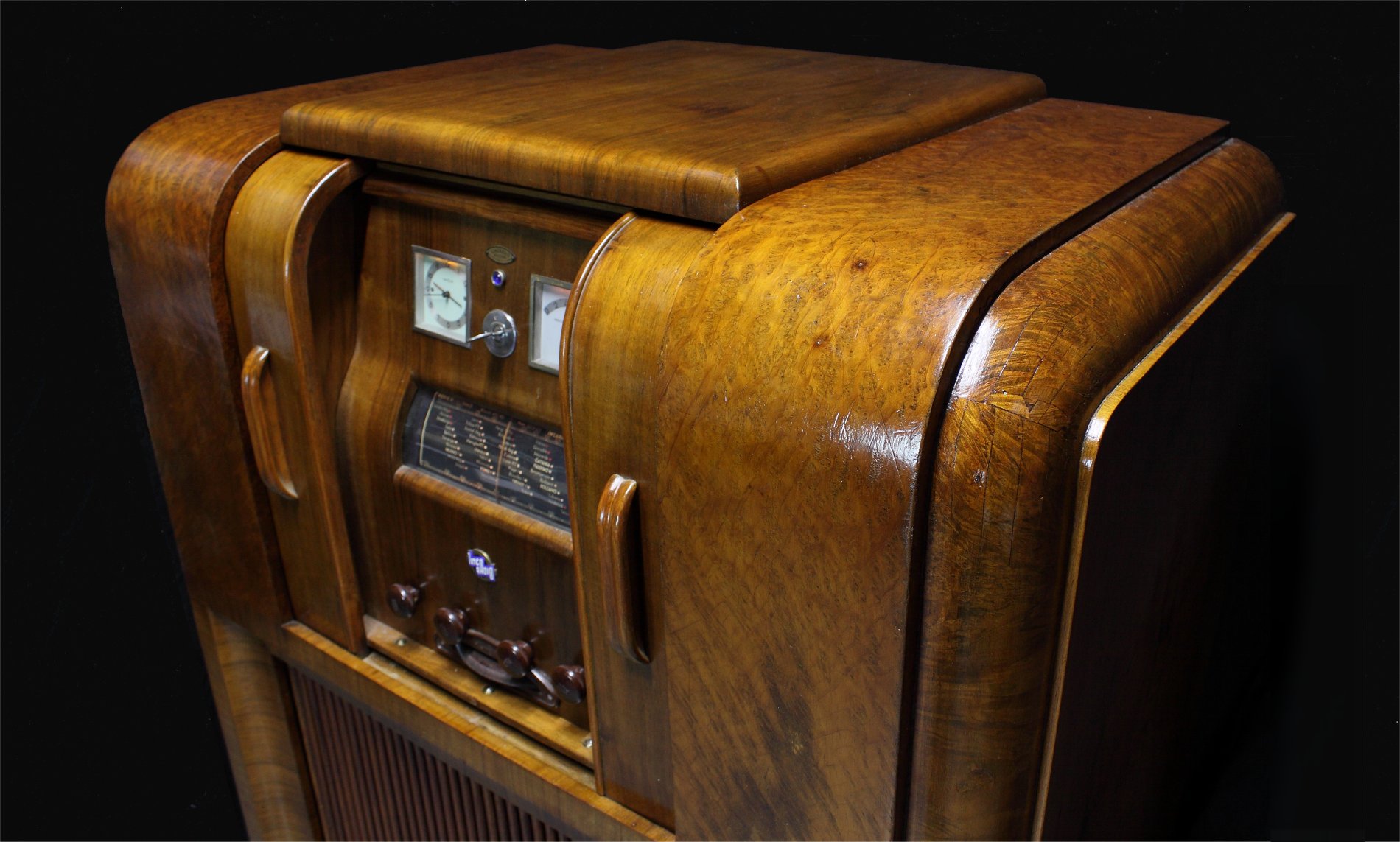 The IF92 Multigamma Imcaradio has a sturdy Direct Drive LESA record player, equipped with Speed Control and electromagnetic cartridge with steel needle.

The High Frequency Group is composed of a rotating drum that can be extracted from chassis as it has no fixed connections to the rest of the radio. All the contacts are of high precision.
To each range corresponds a display, as shown in the photos.
The entire High Frequency section is built with high-quality components, such as the air ceramic compensator and the Ducati capacitors.
The CAV (Automatic Volume Control) is very efficient, even on very weak stations. The result is a stable, fading-free reception. 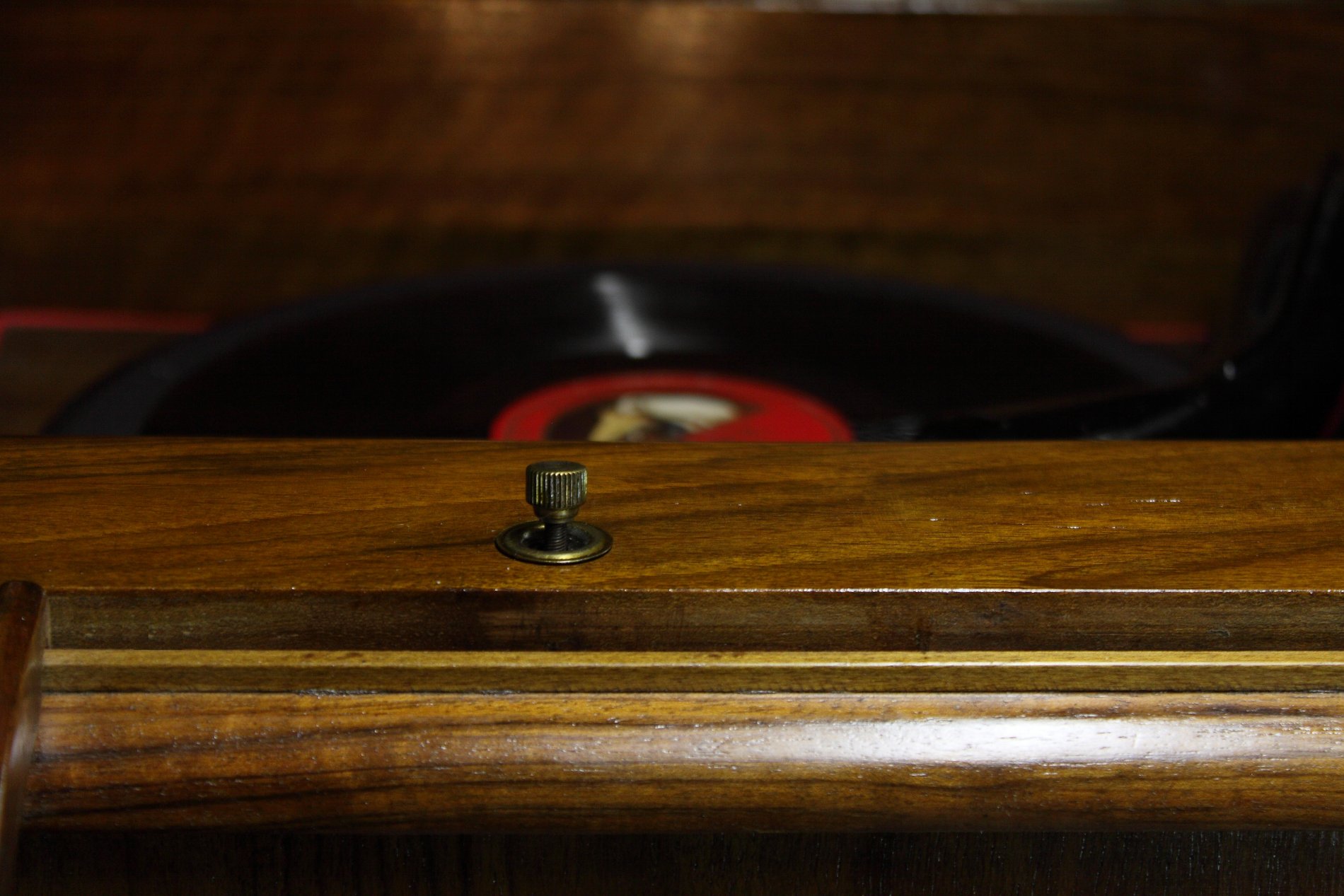 The tunng indicator consists of an extremely elegant electromagnetic milliamperemeter.
A small pommel located in the upper part of the cabinet, under the cover of the turntable, controls by an arm the graceful mechanical clock.
From this pommel the position of the hands can be adjusted and the watch can be loaded. 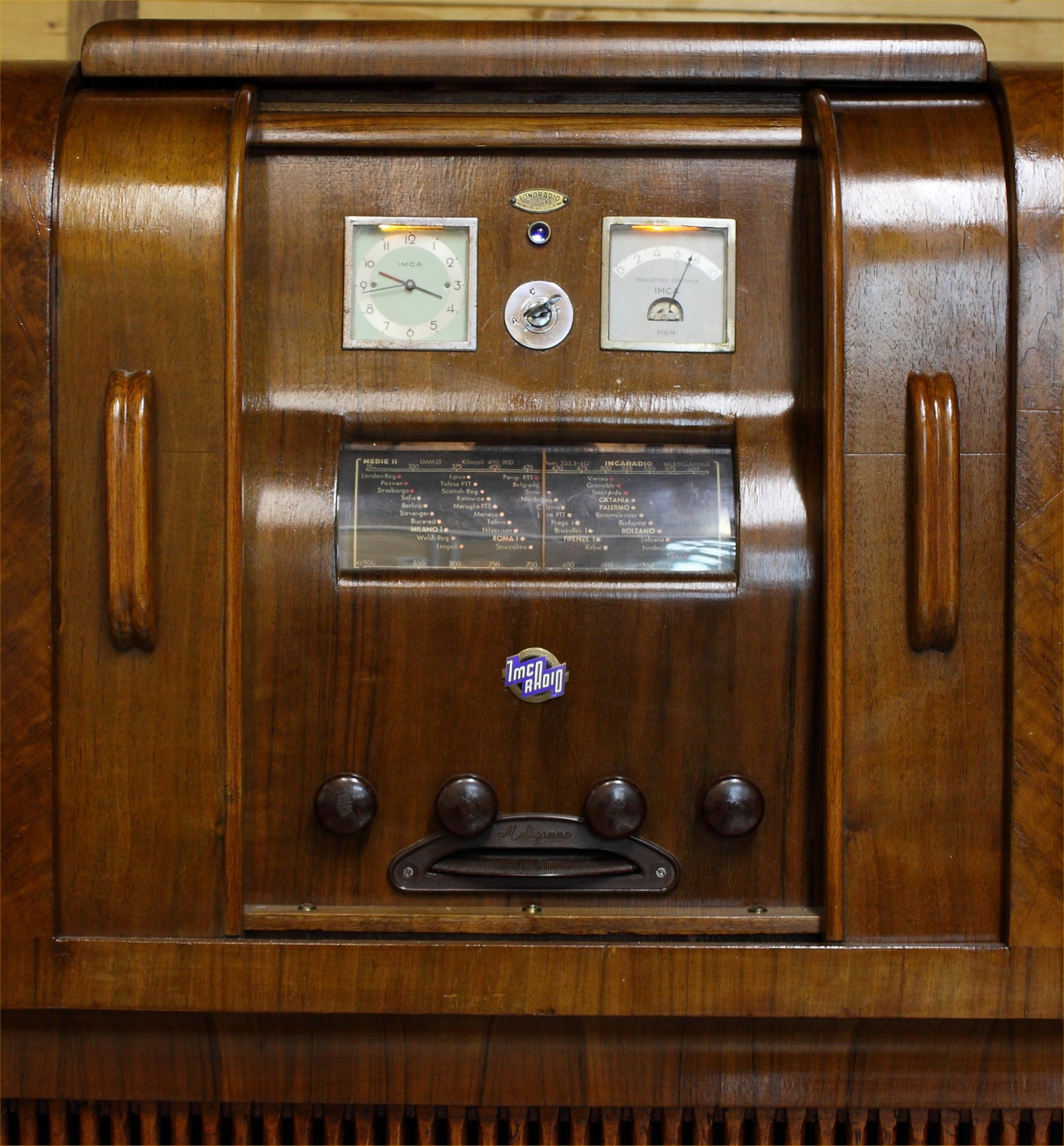 The device can be activated by turning the key. The movement reminds that of the ignition of the Lancia Astura.

On the left of the key there is the clock, in the middle the power light, on the right the tuning indicator.

Below. The first knob from the left is the Tone Control.
The second is the Volume Control which also works as the Input Selector.
- The Radio Input is selected in the regular position .
- The Turntable Input is selected in the extracted position.
The third knob is Normal Tuning Control. This knob is mechanically connected to the large horizontal wheel placed below the other knobs, which controls the Fine Tuning.
The last knob on the right controls the Drum Band Switch. At each change of range the display of the selected band is displayed.

In the rear side there is the input for turntables equipped with an electromagnetic head with a steel needle and the input of the mains voltage. 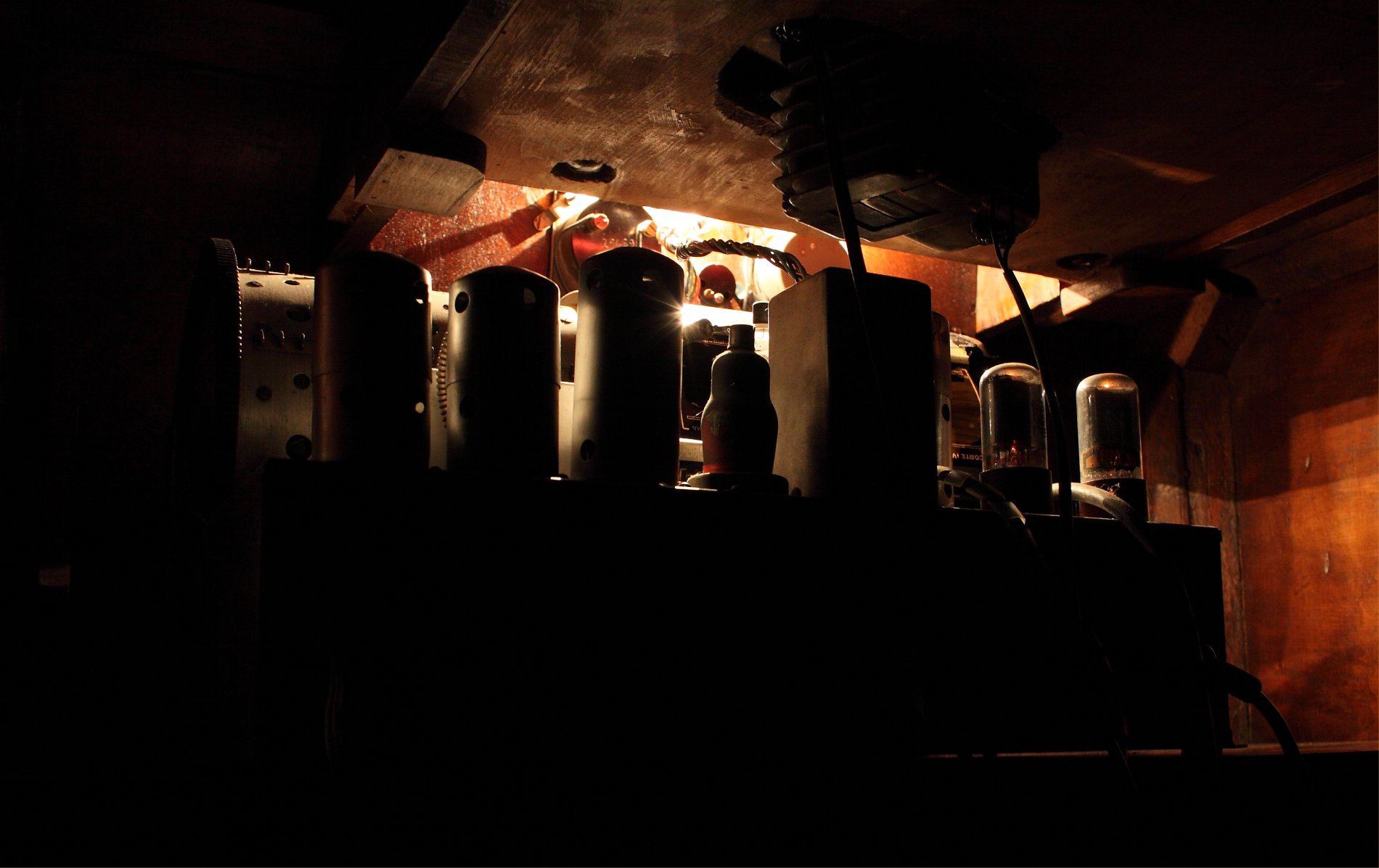