The Grundig 3012 is a very special device called friendly "The bufferfly" because the loudspeakers position. The classification of Grundig devices is as follows:

The Grundig 3012 belongs to the Medium Class but it has some features of the Upper Class.
Firstly, the final tube is a powerful EL12, normally used on Serie 5 devices.

The EL12 is a large pentode that delivers until 8W in A- Class.
The output transformer is a very large, almost like the power transformers in a normal radio, so it hardly goes into saturation.

Another important feature is the two elliptical loudspeakers.
Together, they can reproduce very low notes. Being smaller, they are faster and for this reason the bass is very limited, pleasant and modern.

Finally, the central tweeter and the symmetrical arrangement of the two broadband loudspeakers simulate a sound emitting point source. In this way, it is possible to get a remarkable “soundstage” effect and great depth of environment.

The cabinet of the radio is very beautiful and contains a surprise.
The clear frames that you can see on the sides are not painted, but they are inlaid.
All of these architectural choices do not belong to a Medium Class device, in fact Grundig 3012 is not a device of that class. 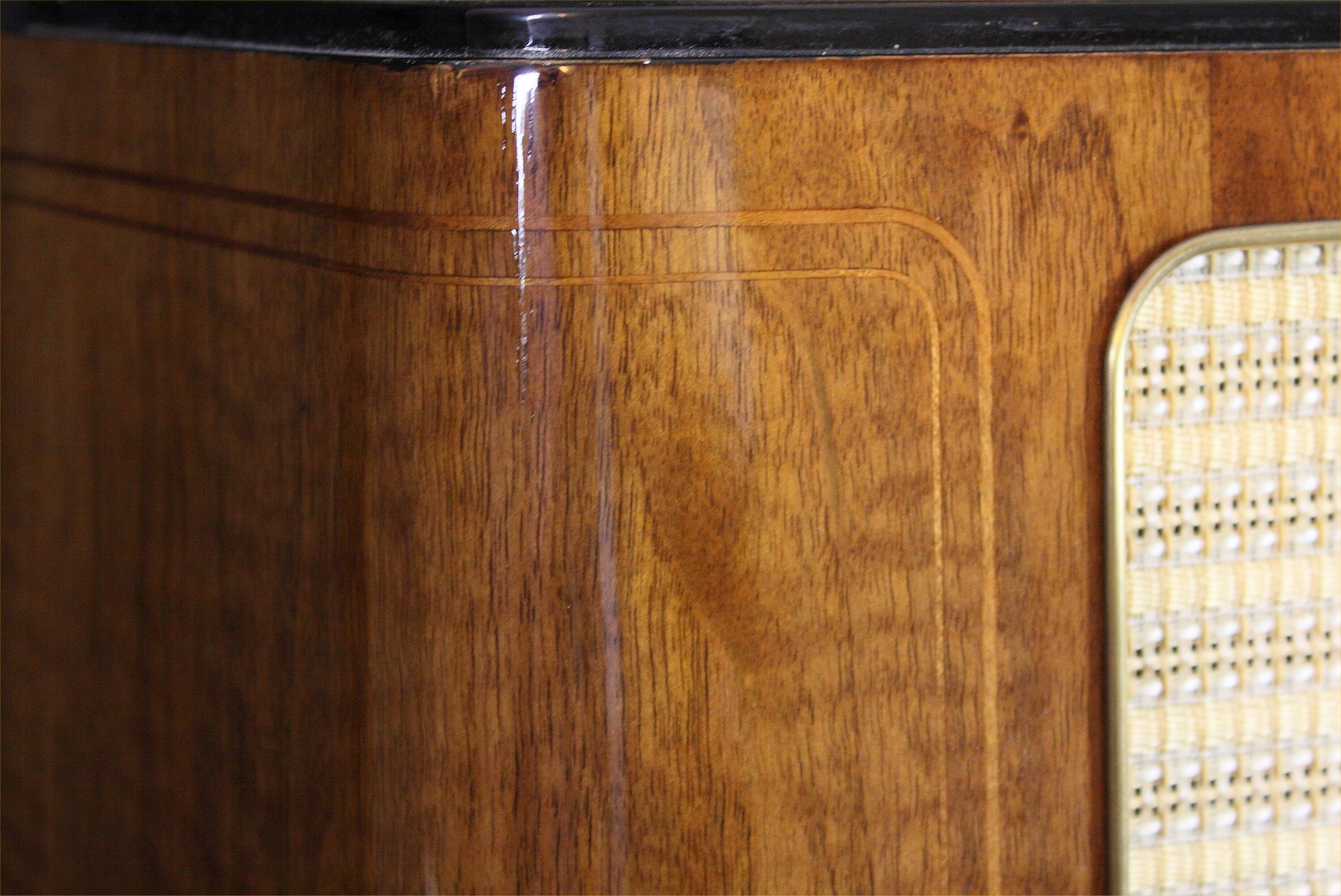 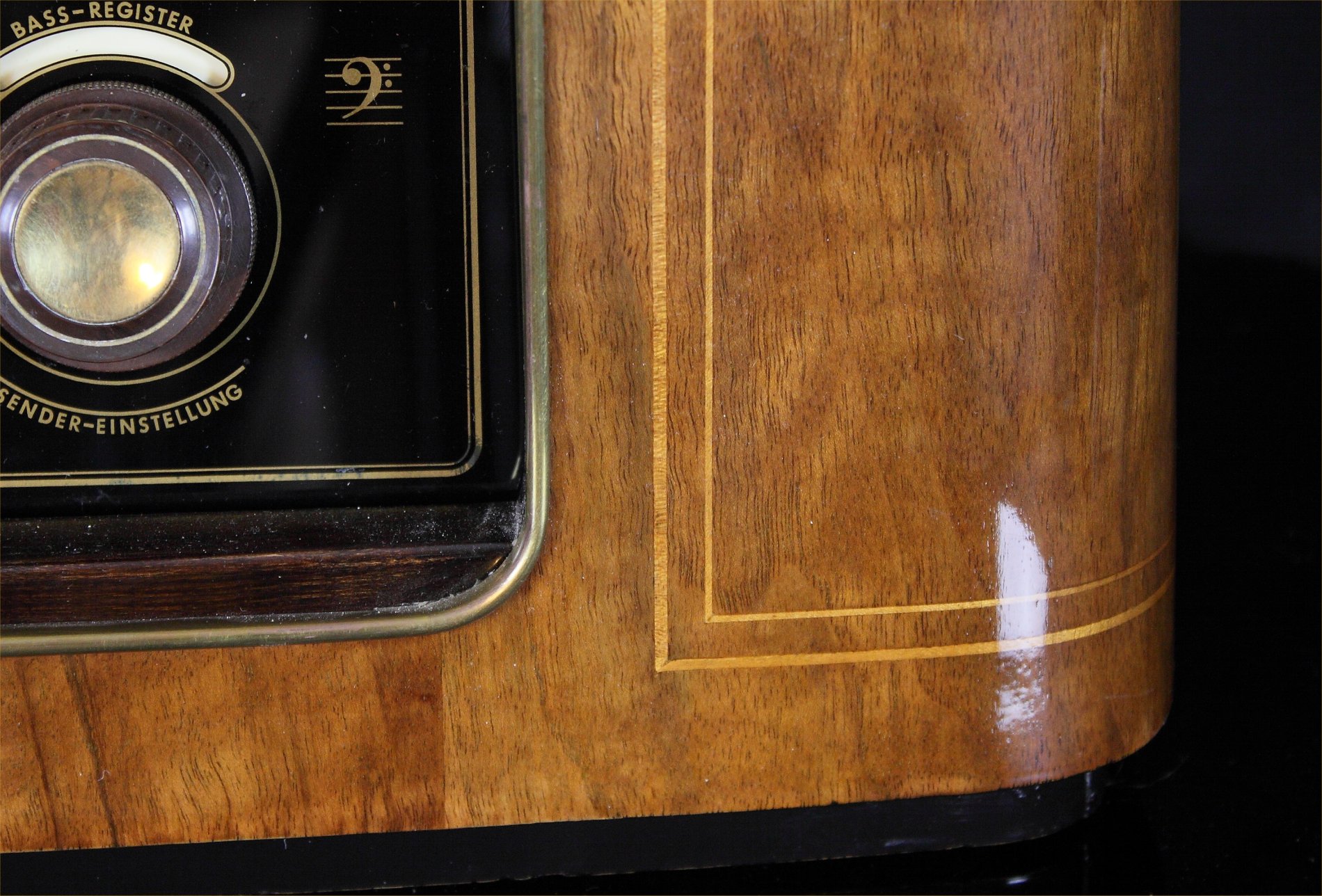 1939 - The II world War start. Grundig works primarily for the Wehrmacht and repair of telecommunication equipment.

1945 - Immediately after the war, the demand for repair work was very great. Max Grundig built the first two Grundig appliances: the Tubatest tube tester and the Novatest testing device.

1950 - Very high frequency (VHF) is introduced to Germany and places new demands on the industry. Grundig launches the 380 W on the market.

1952 - The first television channel starts up in Germany. After intensive research, Grundig launches the FS 080 onto the market. In the same year the first portable tape recorder Reporter 500 L is created.

1956 - After a lot of radio produced with progrssively high performances was produced the Concert Radio 5080 equipped with an equaliser, which has five controls and a visual display.

1965 - A new factory is established in Braga, Portugal. The Satellit 205 is one of many appliances in the Satellit series. This product marks the beginning of Grundig production of high-quality global receivers.

1970 - The Audiorama 7000 Hi-fi was produced, it has twelve dynamic speaker systems in one speaker.

1984 - After severe drop in sales Philips increased its stake in Grundig 31.6 percent and takes over the corporate management.

1997 - Philips pulls out of its involvement with Grundig.

2003 - The company files for bankruptcy. 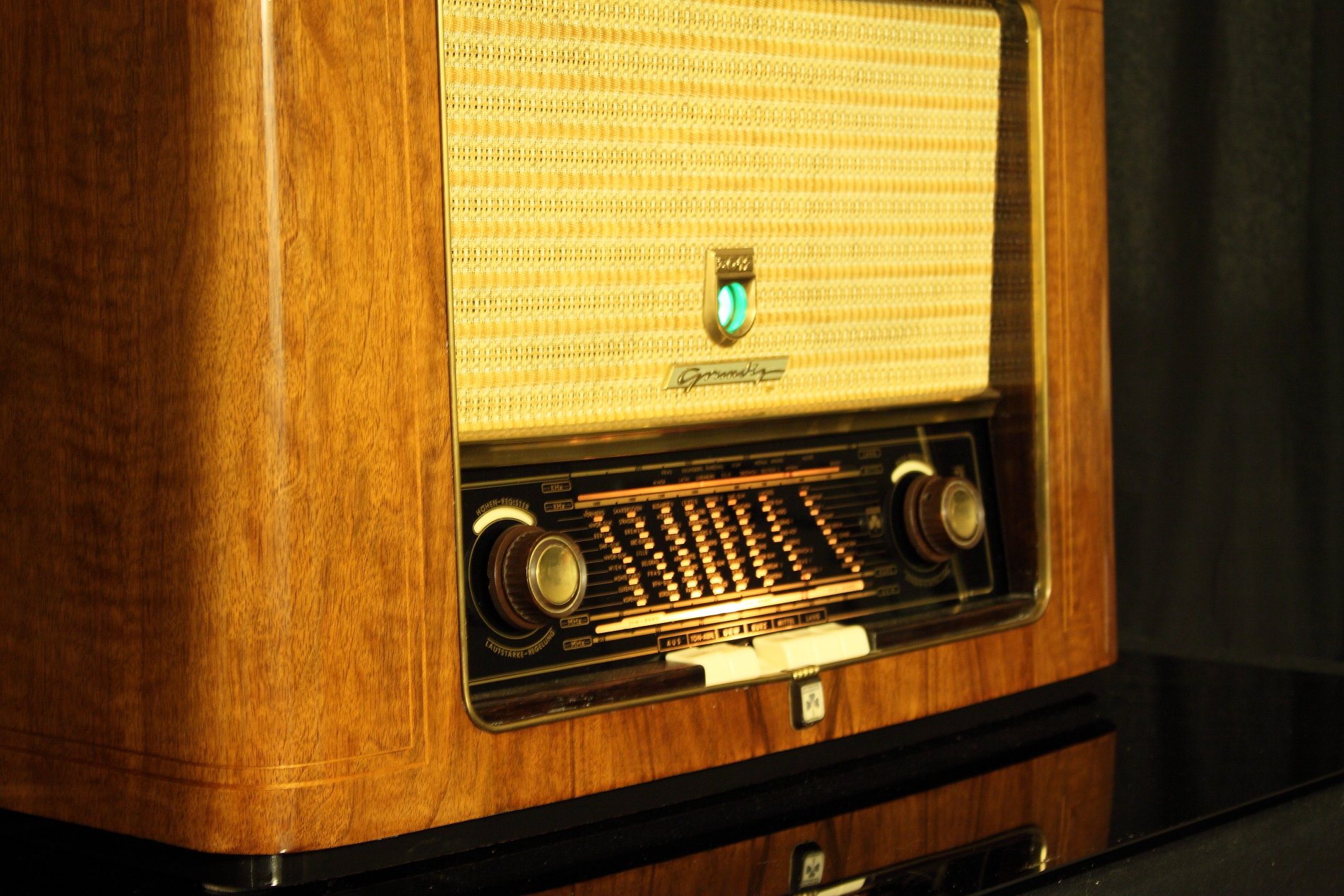 The tones control system is very efficient. Above the large tone control knobs there is a band that lights up gradually indicating the emphasis on the band on which it acts.
Interesting the high-tone control knob linked to two thin ropes. One of them is for the position indicator of the control itself, whereas the other changes the position of the ferrite in the MF transformers modifying the inclination of the transformer’s curve.
By doing so high tones were attenuated/accentuated even before getting to the BF stage. Tone control was usually put into effect with the potentiometer on the voltage amplifier stage

Inside the cabinet there is a dipole for FM reception.
One arm of the dipole is also used for receiving AM bands.
Listening FM band the reception sensitivity with internal aerials is very good.
For AM bands using an external antenna the sensitivity is good.
The picture shows the dipole fixed internally to the cabinet. 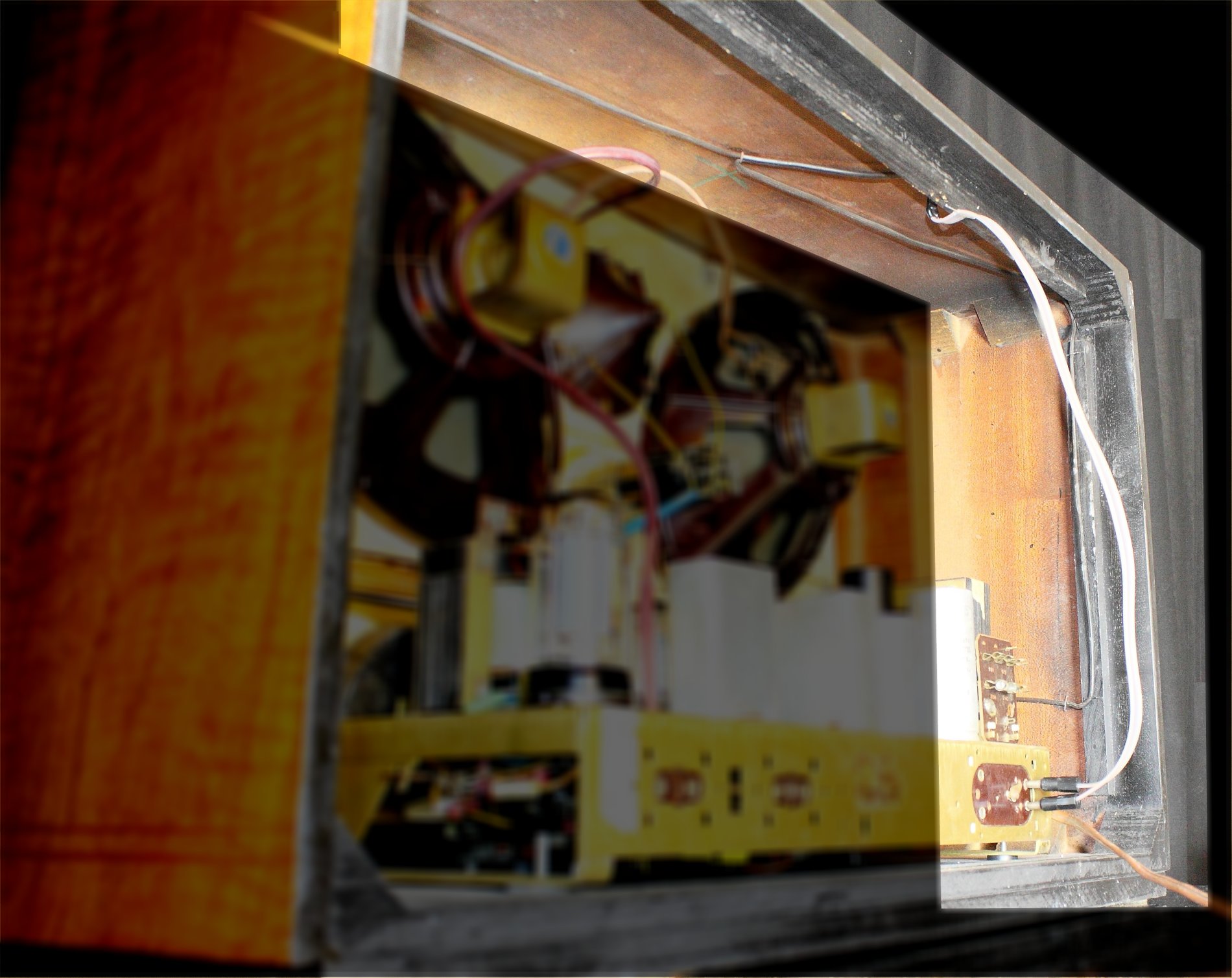 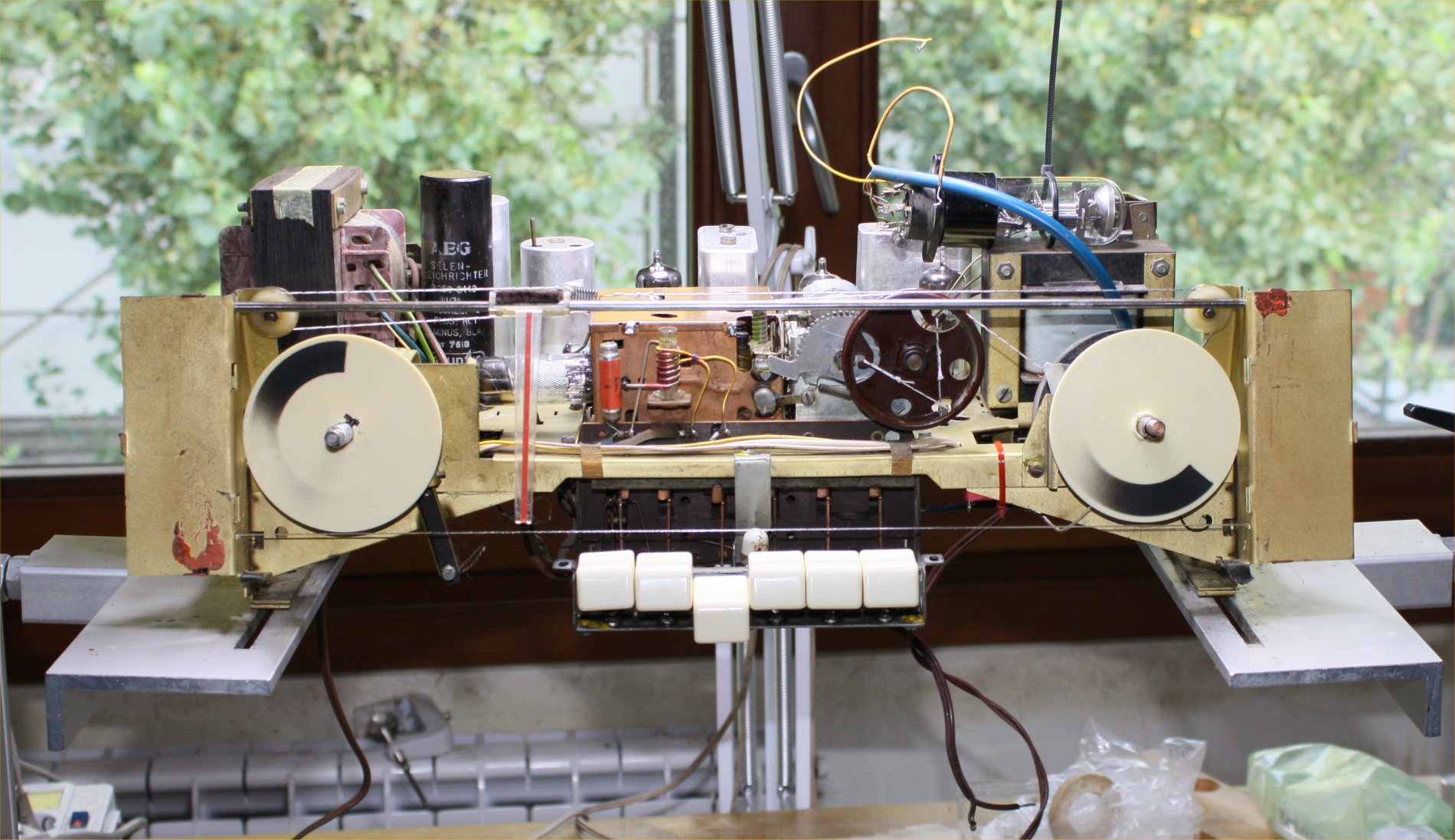 For both AM and FM bands the tuning system is unique.
The single variable capacitor is divided into 4 sections, two for AM and two for FM.
Each section is used respectively for the RF amplifier and the oscillator.
The mechanism is very simple and robust. It has the disadvantage of being a unique command for all bands. 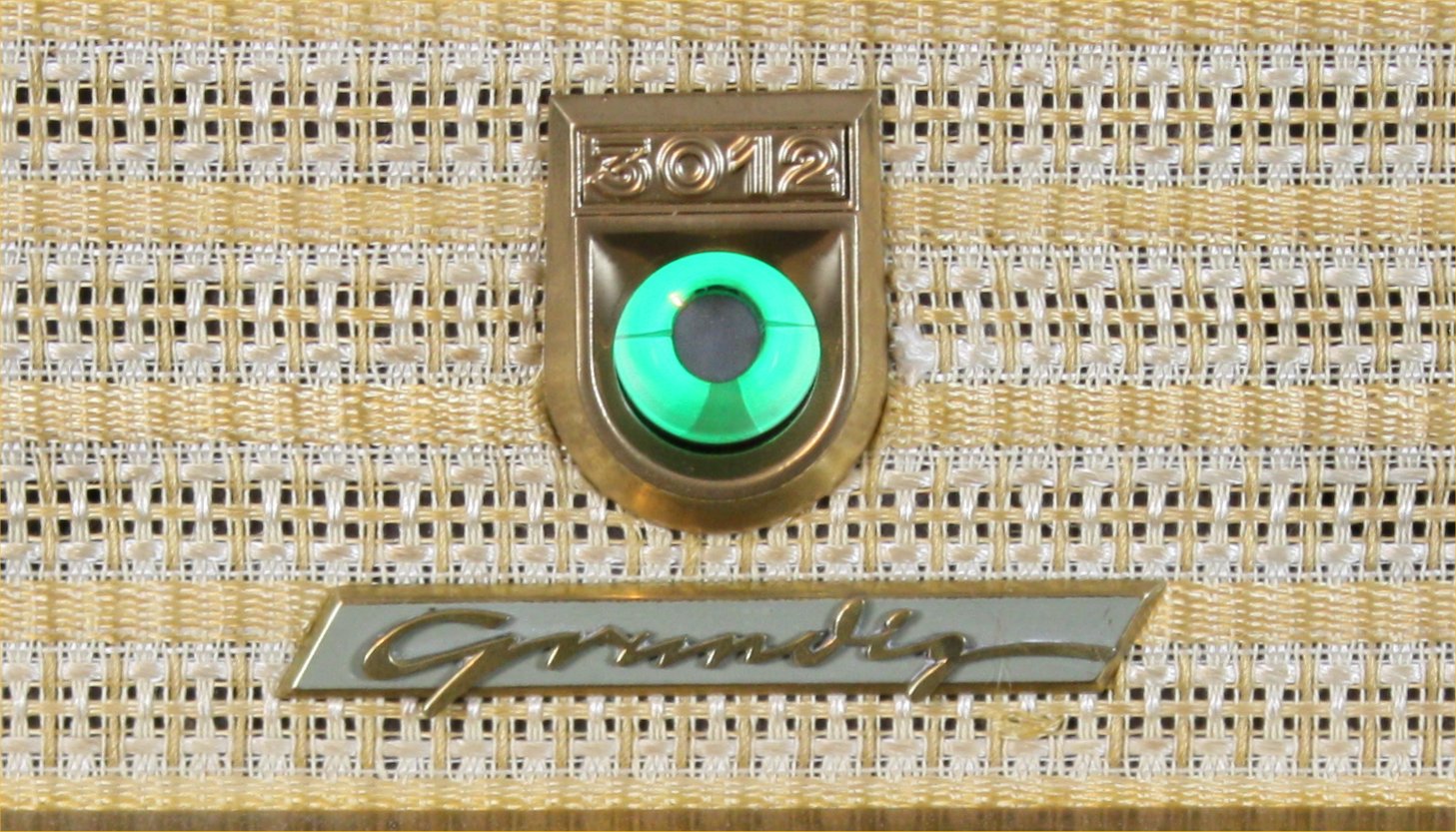 There are three speakers, but what matters most about this unit is their arrangement.
They are arranged to reproduce the sound as if it came from a point source, like in a single speaker.
The acoustic result is extremely enjoyable, and the rebuilding of the scene is realistic. You find the depth and the space.
The bass is very deep and fast, and the acute are balanced, thanks to the help of the central electrostatic tweeter.
I do not understand why this configuration was not re-proposed even in the most expensive models. Maybe just to keep costs down.

We also find the power off buttons, which input from the record player, FM, Short Medium and Long Waves.
There are also two coaxial knobs. The most exterior and smallest, is the tuning knob.
The internal and largest, is the low tone control knob.
Above this, a little window is visible indicating its position. 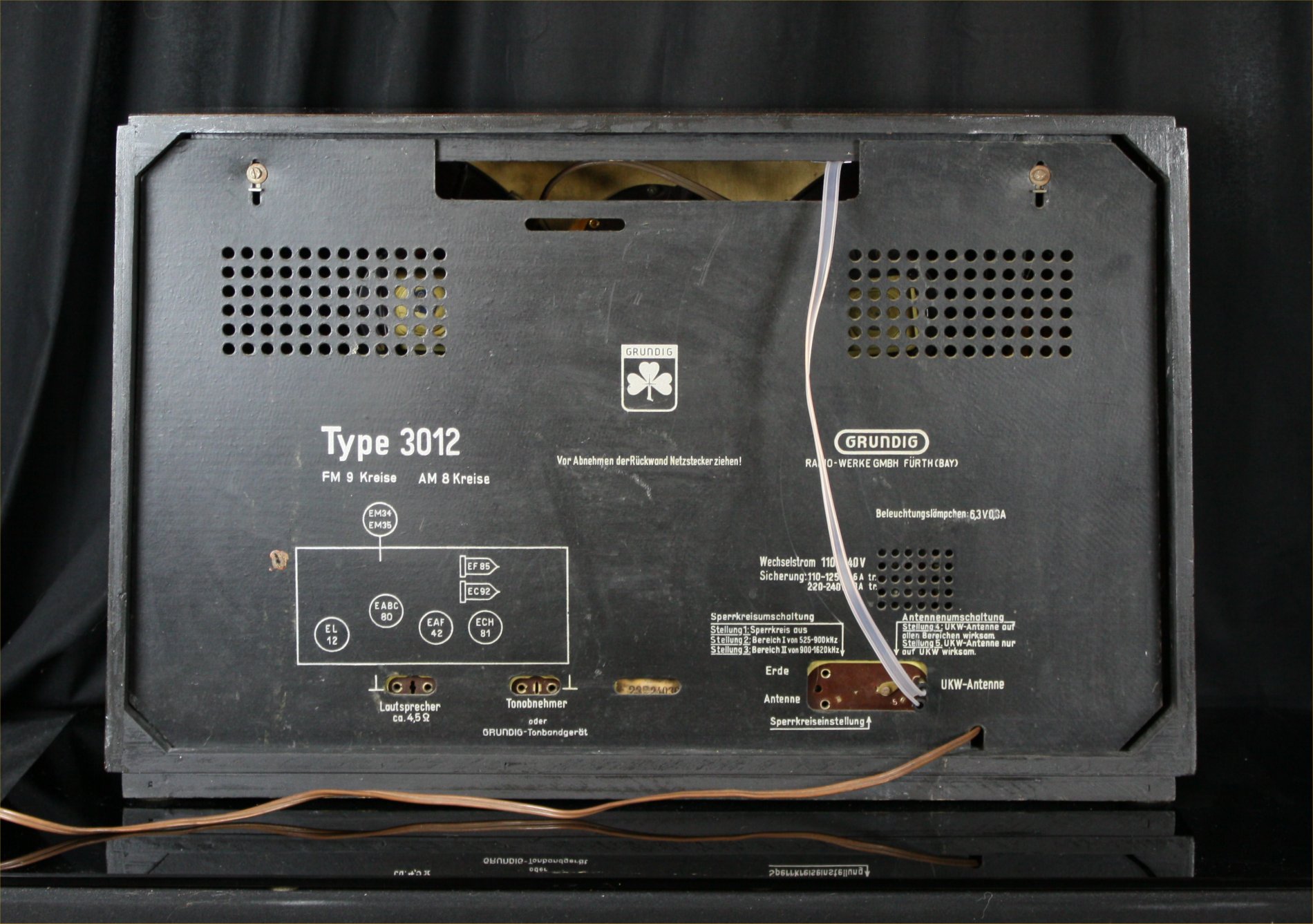 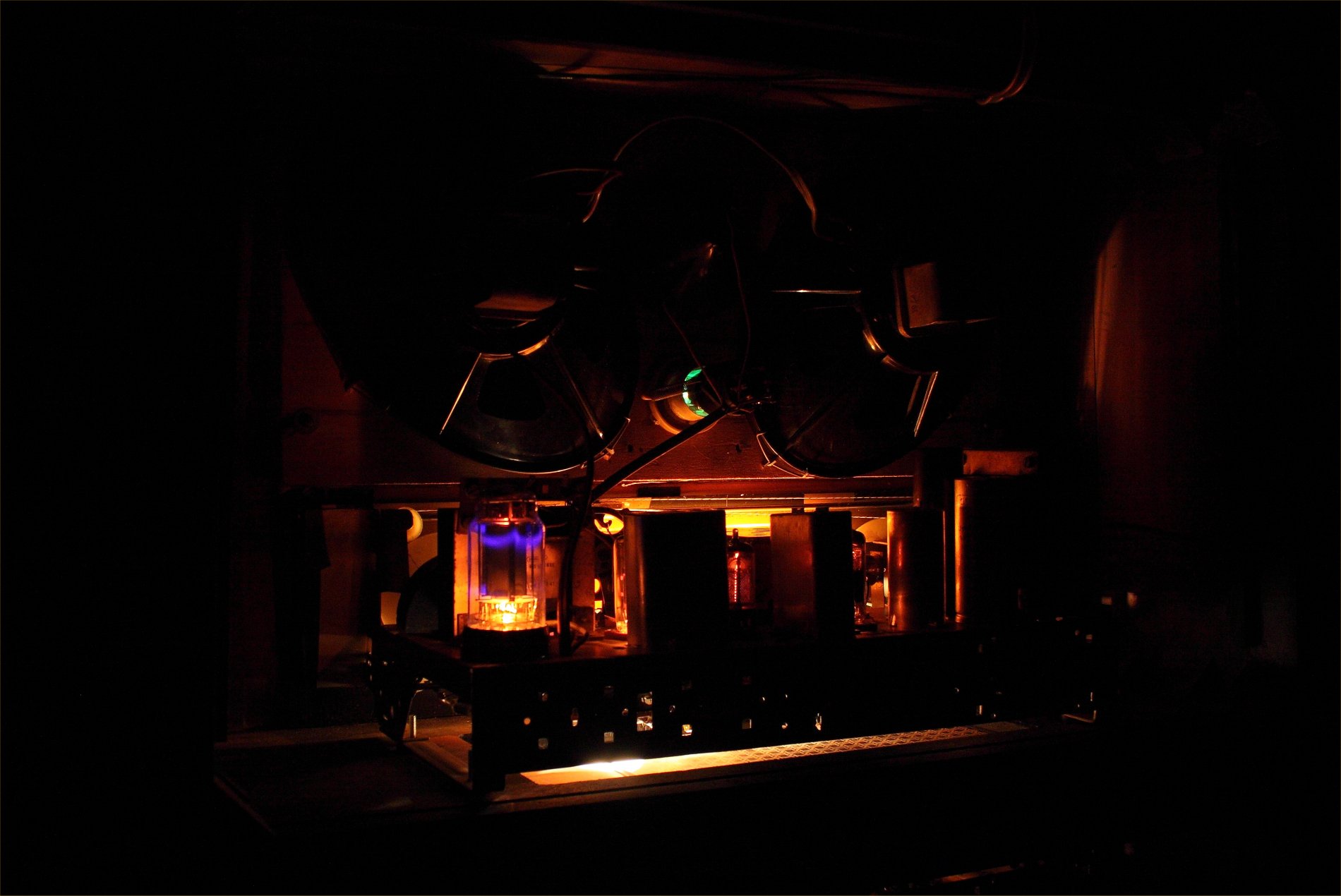