In this review I analyse, clearly, the most glamorous model, the Grundig 4004W (EL12).

I begin the description anticipating the most singular and interesting peculiarity of this machine: it is perfect for the reproduction in Short Waves.
In fact, apart from having the short waves band divided into three sections, it is one of the rare commercial radios provided with RF amplifier stage for AM bands placed before the converter/mixer stage.

This device is particularly interesting as it combines some features that in other radios we only find singularly.
1) compact dimensions for the class
2) top-quality trim of the cabinet
3) great output power and sound quality
4) good number of receivable bands

Let us analyse these features in detail:

1) compact dimensions for the class: despite being unsurpassed as for the output power, in Grundig's production of 1950/51 the dimensions are relatively compact. This facilitates the location in every space.
Moreover, the controls are particularly simple, intuitive and pleasant to operate. The device is thus presented as overall amicable and a high level of familiarity is immediately established, at first blush.
2) top-quality trim of the cabinet: the wood grain is very evident and they create a fascinating movement on the surface of the cabinet.
Another accuracy, expensive and difficult to obtain is the manufacturing of light frame that enclose the cabinet. It is not painting nor glued tapes, but authentic inlays of clear wood.
This technique was abandoned by Grundig the next year, in favour of much cheaper processes for the reproduction of frames.
3) great output power and sound quality: the output stage is formed by an excellent EL12 in A class, provided with an output transformer of great size for the avoidance of saturations on lower notes. The output power is at the highest level of Grundig's production of those years, about 6W. This remarkable power is transformed into a considerable acoustic pressure by the generous Alnico loudspeaker with cast alloy basket and by the slanting cone profile. The high-pitched tones, finally, become crystalline, never too sharp, thanks to the very big electrostatic tweeter placed beside the broadband.
4) good number of receivable bands: the section in amplitude modulation of this device is very accurately designed.
In the 1950's in Short and Medium waves a great number of broadcasters was present, thanks to the ability of this wavelengths to cover significant distances.
In Grundig 4004W the short wave band is divided into three sections, completely independent.
Short waves 1, from 50,8 to 35 mt (5,9 - 8,6 MHz)
Short waves 2, from 35 to 24 mt (8,6 - 12,5 MHz)
short waves 3, from 24 a 16,7 mt (12,5 - 18 MHz)
In this way the tuning on such bands is very precise, as each band has the entire extension of the scale.
In the devices produced in the next few years the short wave band is squeezed on a single scale.

Medium waves have been divided into two sections:

Moreover, before the oscillator/converter stage there is an Amplifier RF stage formed by an EF11. This solution will also be abandoned in the next few years due to the progressive increase in the importance of the FM band.

The FM band goes from 87,5 to 100 MHz. The installation of the Bluetooth is thus highly recommended on this device.

All of these adjustments will make these devices last over time. Nowadays, should an engineer include such adjustments, he would probably be demoted or thrown out of the company! 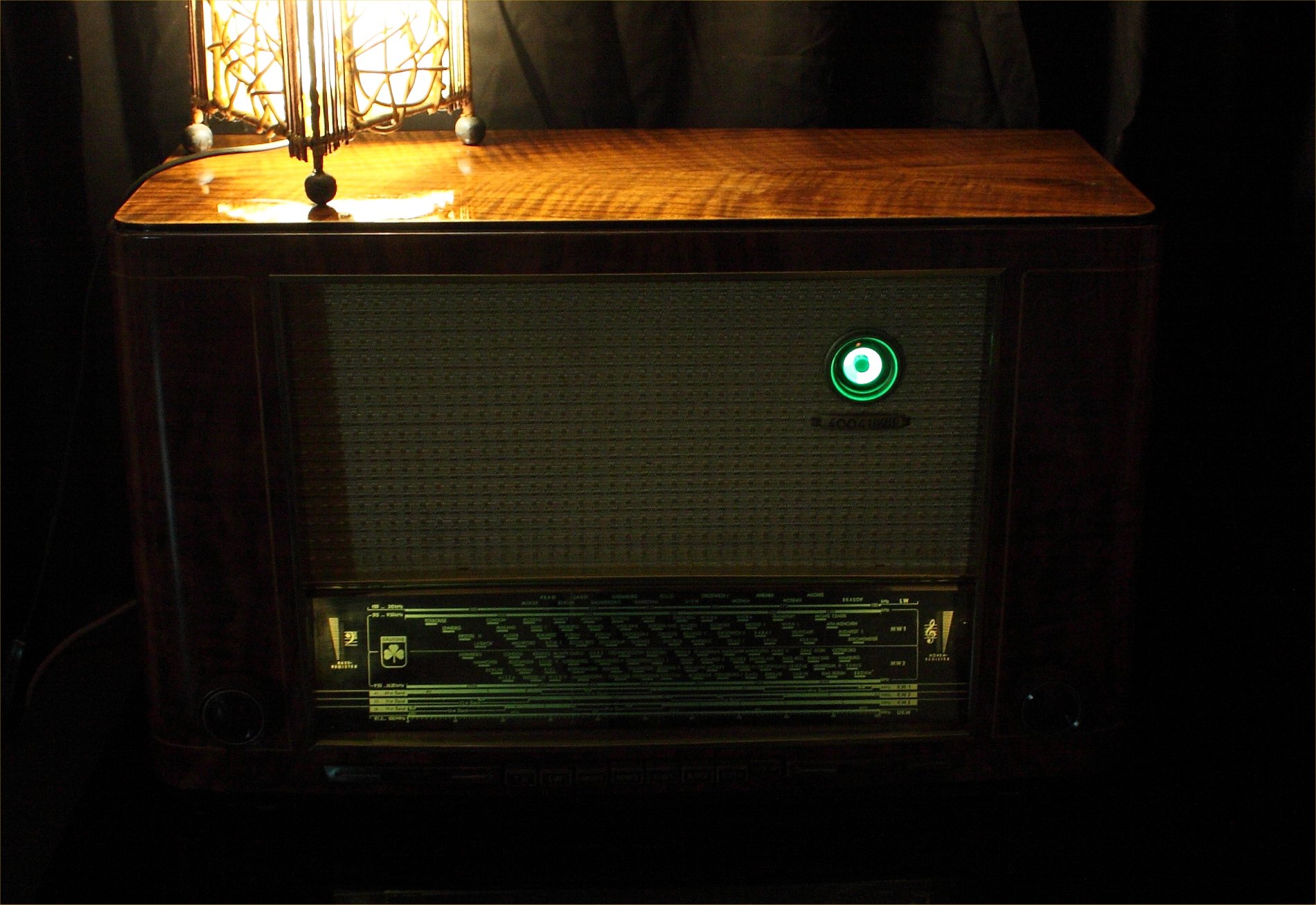 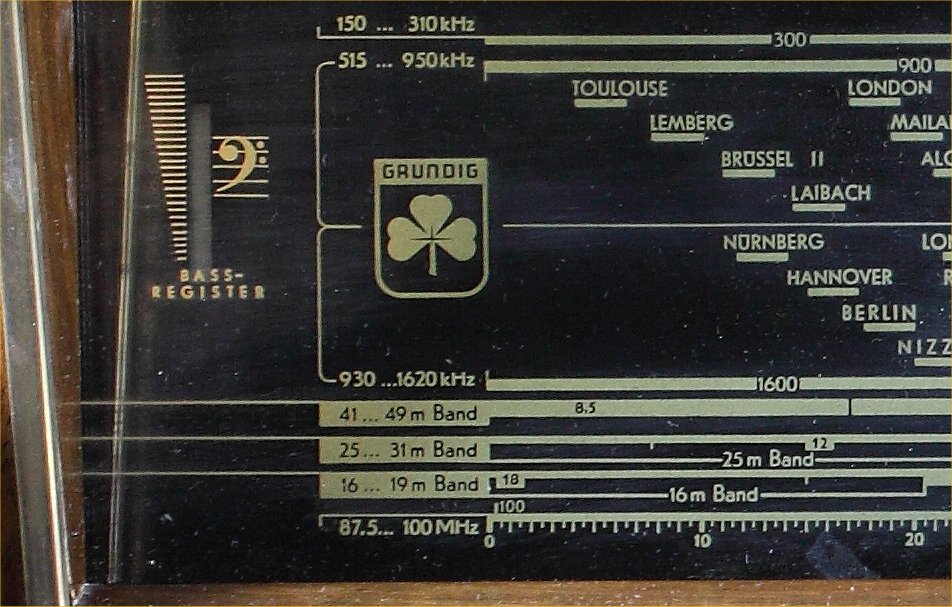 Each radio can be equipped with a cable for connection to any digital device.

- Bluetooth receiver embedded - The unit can be equipped with a BLUETOOTH receiver powered directly by the receiver power supply. This makes it possible to control the amplifier from any external digital device as an IPAD, a Smartphone, or a sophisticated multimedia station. So you can hear your preferred web station or your lossesless file without cables on the room. Wireless Receiver can be equipped upon requests.

- Multi Platform Connection - A customized adaptation cable to connect any digital device as Iphone, Smartphone, Laptop, CD Player etc. can be provided with this radio. This special cable suits the different impedances between the modern equipment and the receiver. Furthermore the two stereo channels flow into one without increasing the load to the input unit.

1939 - The II world War start. Grundig works primarily for the Wehrmacht and repair of telecommunication equipment.

1945 - Immediately after the war, the demand for repair work was very great. Max Grundig built the first two Grundig appliances: the Tubatest tube tester and the Novatest testing device.

1950 - Very high frequency (VHF) is introduced to Germany and places new demands on the industry. Grundig launches the 380 W on the market.

1952 - The first television channel starts up in Germany. After intensive research, Grundig launches the FS 080 onto the market. In the same year the first portable tape recorder Reporter 500 L is created.

1956 - After a lot of radio produced with progrssively high performances was produced the Concert Radio 5080 equipped with an equaliser, which has five controls and a visual display.

1965 - A new factory is established in Braga, Portugal. The Satellit 205 is one of many appliances in the Satellit series. This product marks the beginning of Grundig production of high-quality global receivers.

1970 - The Audiorama 7000 Hi-fi was produced, it has twelve dynamic speaker systems in one speaker.

1984 - After severe drop in sales Philips increased its stake in Grundig 31.6 percent and takes over the corporate management.

1997 - Philips pulls out of its involvement with Grundig.

2003 - The company files for bankruptcy. 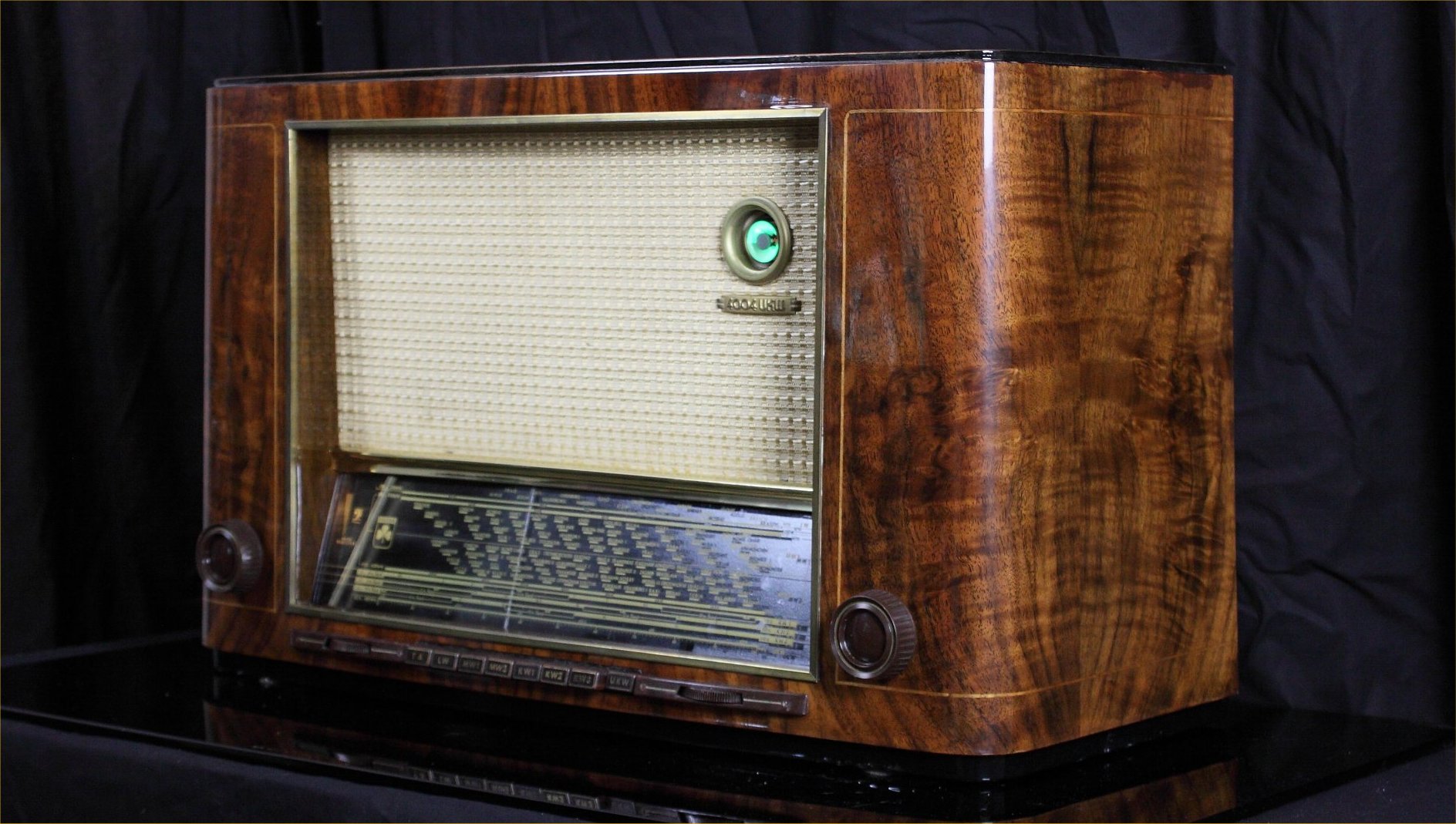 The tones control system is very efficient. Above the large tone control knobs there is a band that lights up gradually indicating the emphasis on the band on which it acts.
Interesting the high-tone control knob linked to two thin ropes. One of them is for the position indicator of the control itself, whereas the other changes the position of the ferrite in the MF transformers modifying the inclination of the transformer’s curve.
By doing so high tones were attenuated/accentuated even before getting to the BF stage. Tone control was usually put into effect with the potentiometer on the voltage amplifier stage

Inside the cabinet there is a dipole for FM reception.
One arm of the dipole is also used for receiving AM bands.
Listening FM band the reception sensitivity with internal aerials is very good.
For AM bands using an external antenna the sensitivity is good.
The picture shows the dipole fixed internally to the cabinet.

For both AM and FM bands the tuning system is unique.
The single variable capacitor is divided into 4 sections, two for AM and two for FM.
Each section is used respectively for the RF amplifier and the oscillator.
The mechanism is very simple and robust. It has the disadvantage of being a unique command for all bands.

As indicated in the first description, there are two loudspeakers. They are both placed on the front.

The main broadband cone has a diameter of 22 cm. It is made of strong alloy and has an Alnico magnet.
The dimensions of the magnet are considerable and the weight of the whole loudspeaker reveals its sturdiness.
Actually, it has to sustain the solidity of the big EL12.
The curving of the cone is exponential, as it is customary in a high-quality broadband.
This cone is protected from dust by a light loosely-woven cloth, enough to make also high-pitched notes pass through.

The electrostatic tweeter covers the range of very high frequencies.
The final result is, of course, a very clear and prompt sound on high frequencies, due to the very light moving mass.

Both the loudspeakers are produced by Grundig.

The magical eye, which indicates the perfect tuning of each station, is placed on the loudspeakers panel.
On the left there is the volume control (with integrated loudness).
At the beginning of its running, the potentiometer snaps because of the ignition switch.
Moving right, we find the low tones indicator on the glass display.
Then, we find the scale of Long Waves, the two of Medium Waves and the three of Short Waves and the FM band.
Finally, the high-pitched tones indicator is visible behind the glass.
Further on the right is the harmony control knob. 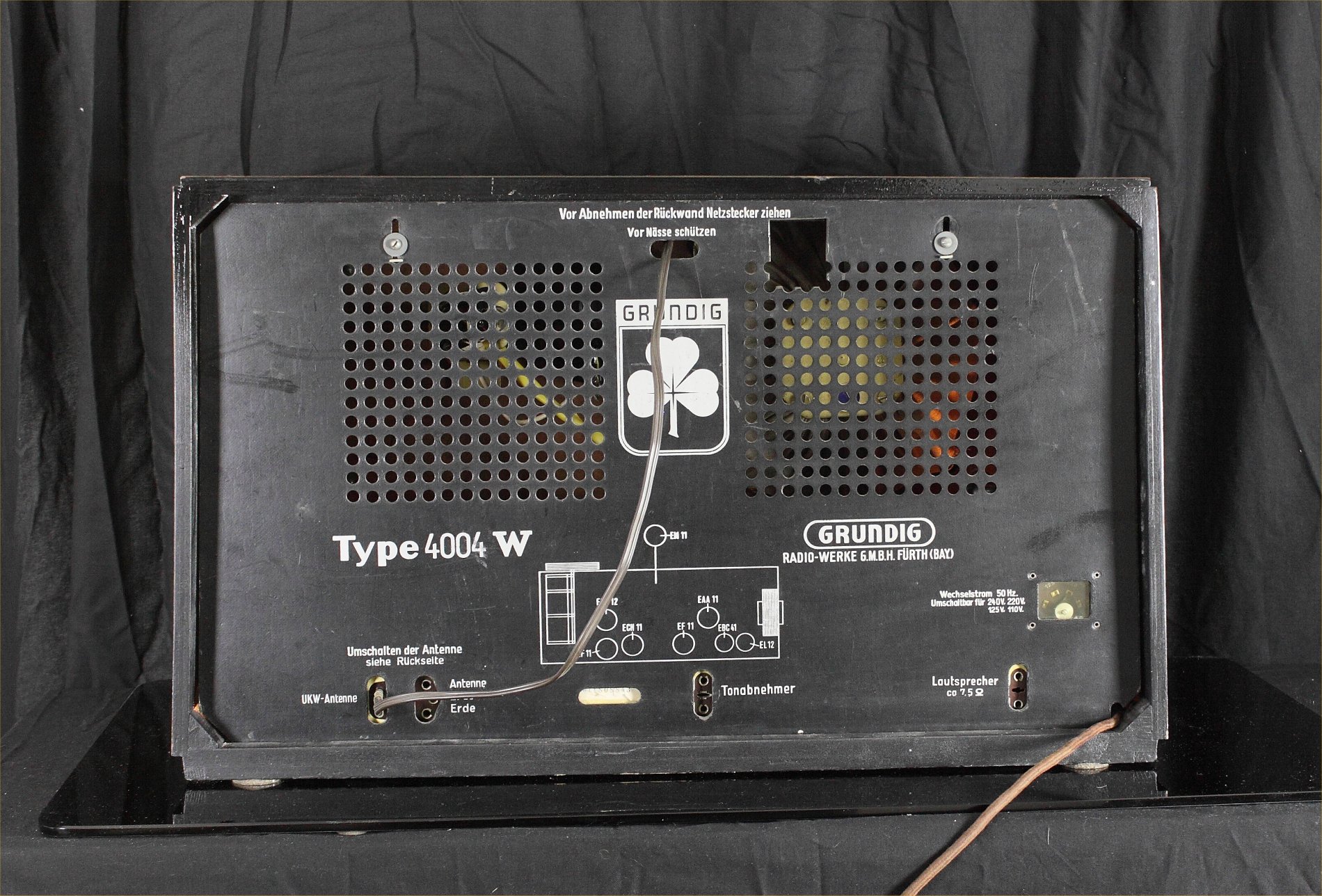 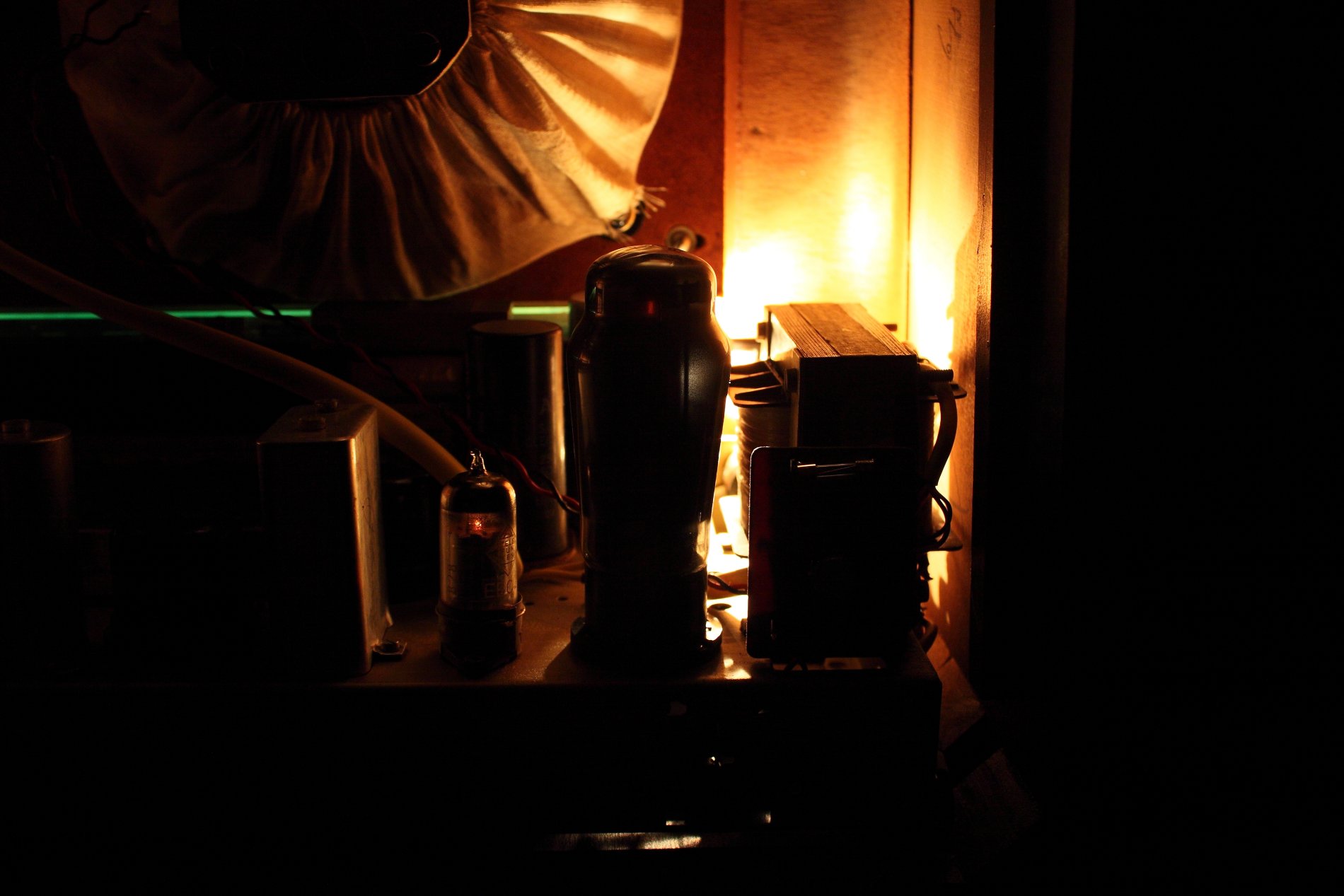