The Siemens Schatulle was produced between 1954 and 1955 and it was another of the best and most successful models of the entire Schatulle series.
Sold in a limited number of items due its high cost and dimension, it was, together with the P48, the model with the most impressive sound impact of the entire Siemens production.

- The power stage is the same as the P48's one, a pair of Push-Pull EL84, a sophisticated counterreaction system, physiological volume control, separate high and bass sound controls.
- There are three ELA series loudspeakers, all of them with double come and highly efficient. Siemens used to have these loudspeakers on its professional installation and in movie theatres.
- Despite its power, this device reproduces sounds with such a fascinating smoothness that can be had , once again, through the large band loudspeakers. These loudspeakers reproduce indeed the entire audible array with a continuity and linearity unknown to multivia systems. Extreme acutes are not so sharp as in electrostatic loudspeakers, but the maker's choice in this device aimed to create roundness and pleasentness of sounds.
- Dimensions are those of an important device. Its shape captures our attention and in every ambience the device's majesty makes it the epicenter of the room, especially when its front windows are open.

This device is best to be listened in on in a spacious room and played out loud.
The tuning stability allows the last station to be perfectly centered after days.
The mechanics is “simple” but robust. The electronic parts are rather complex, but don't worry, it's completely restored.

This one is a device only for a few lucky ones. 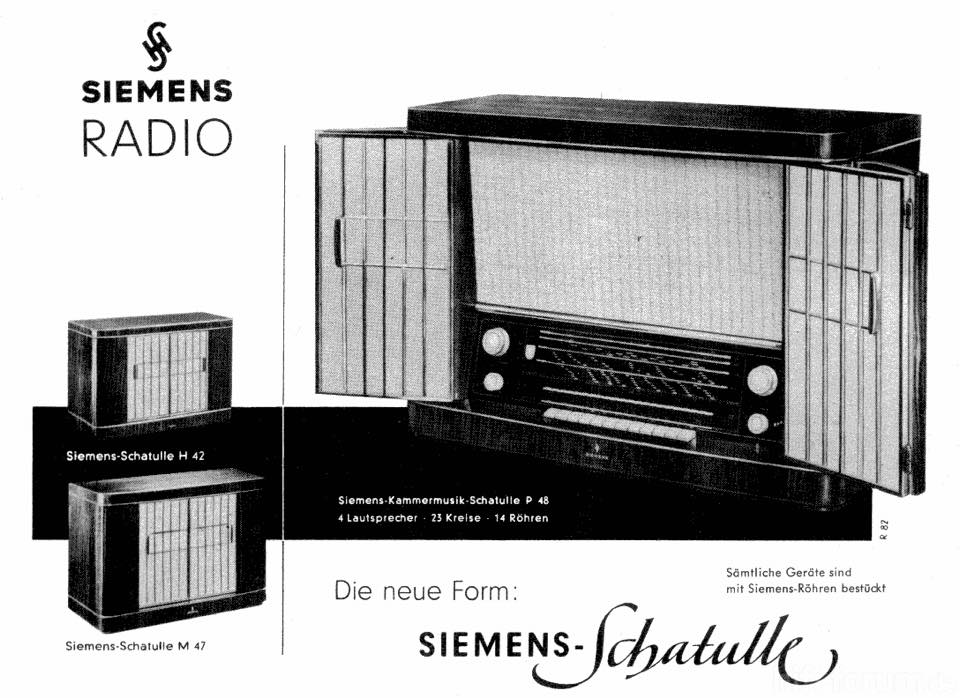 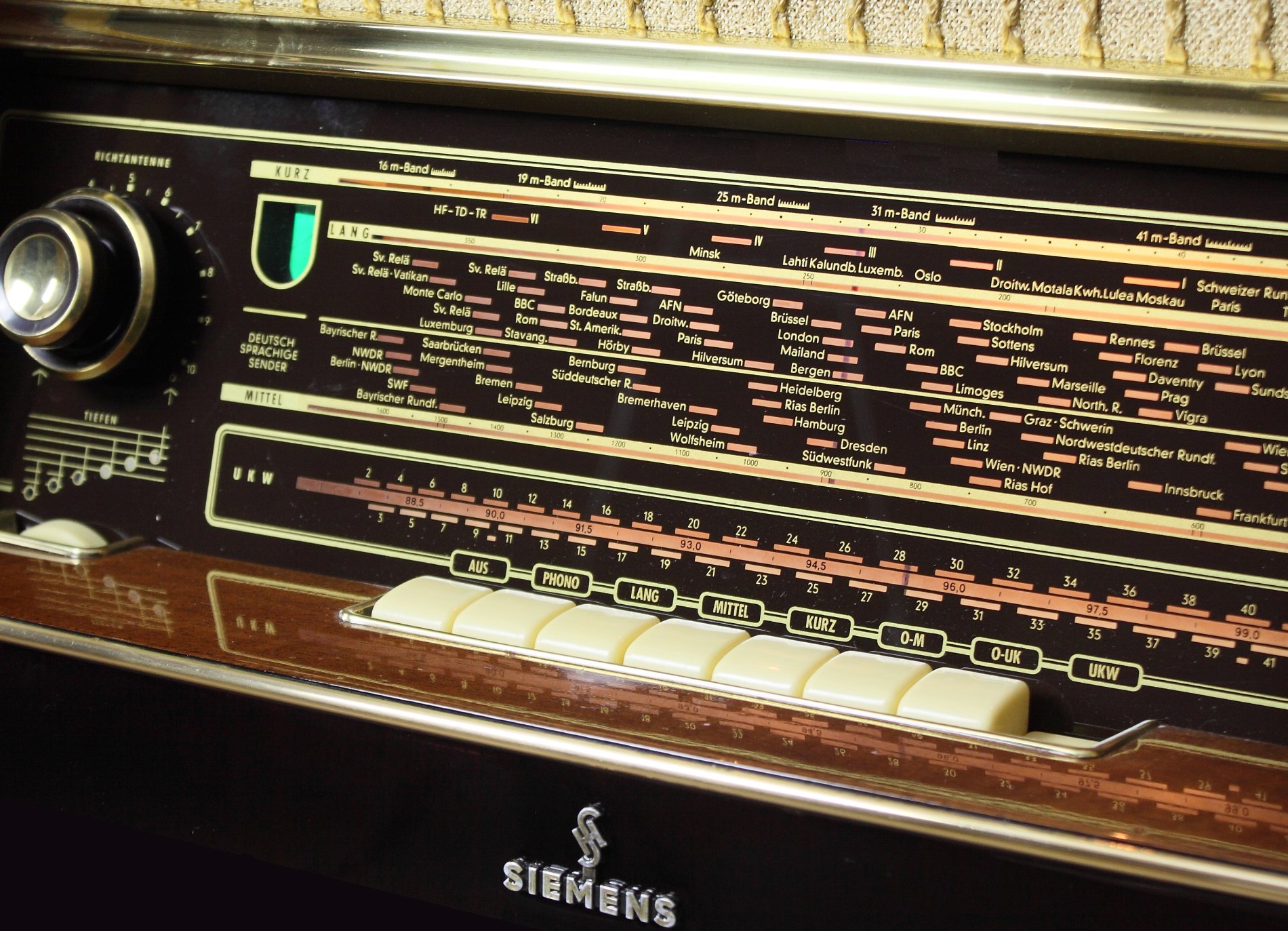 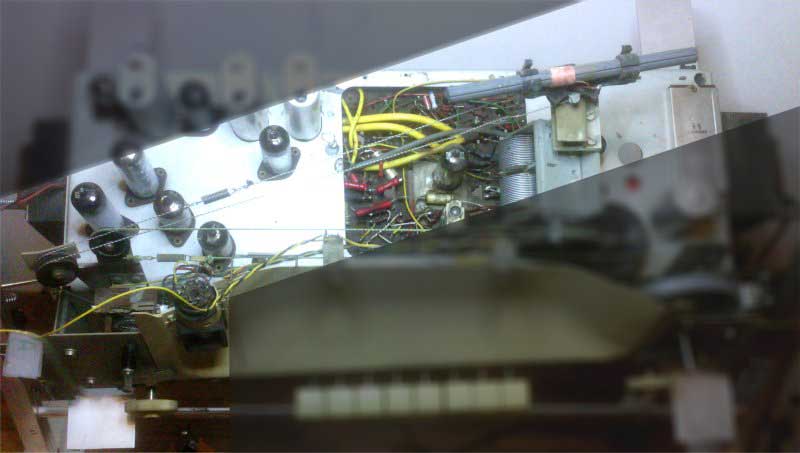 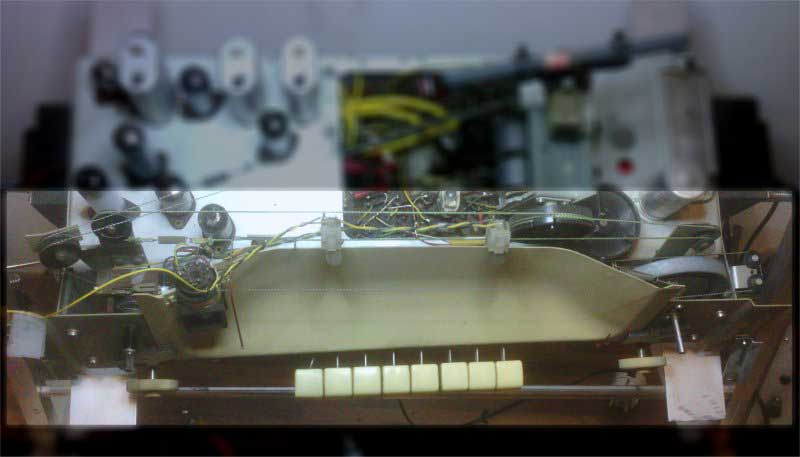 The tuning system is another gem.
The unit is equipped with mechanisms for keeping separate the AM bands by the FM bands.
The tuning knob is single but a selector switch commutes into cable systems (all in steel) and pulleys separated depending on the band. 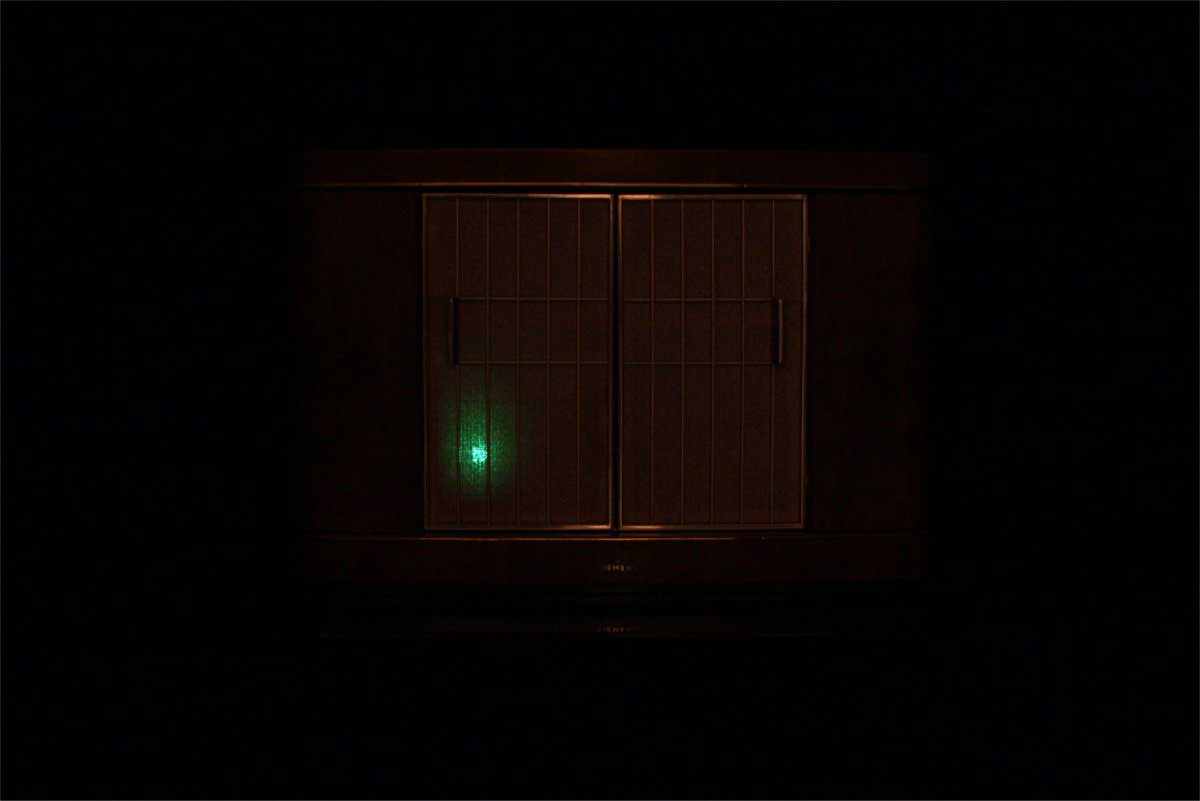 The shutters’ cladding canvas needs to be acoustically as transparent as possible. It is a robust but holed canvas in order for the light to go through.
If you closed the shutter when the radio is on the effect created by the visible rear lights would be rather unpleasant.
Siemens solved this, infact when you close the left shutter the lightning of the dial scale switches off. 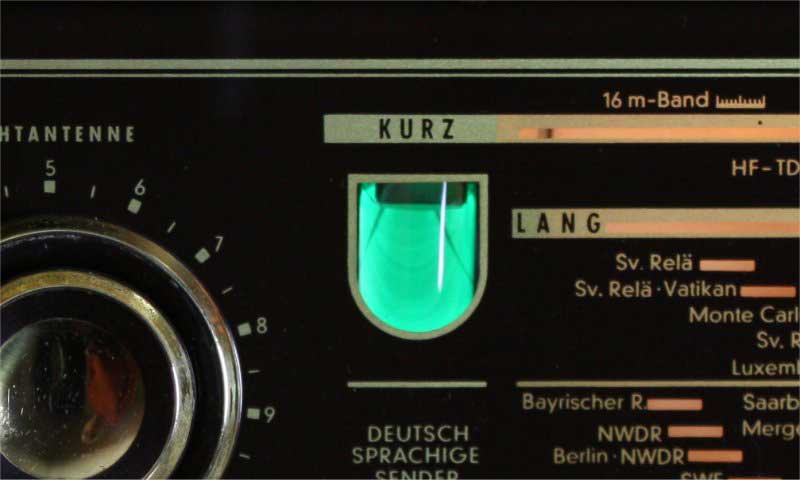 There are four louspeakers.
Two 21 cm (8.2 inches) very efficient bicone and known by experts using these louspeakers to create amplifiers.
The radio is equipped with two cone tweeters assembled on the acoustic lens.
That creates a pleasant ambience and a side diffusion as widespread as possible.

To the left is the volume control (with loudness built-in). Coaxially there is the ferrite aerial control.
Under the dialglass we find the treble control equipped with indicator on the main dialglass.
On the right we find the magic eye indicating the perfect tuning of each station and the Short, Long, Medium, FM scales and further the tuning knob.

Below there are the bass control , the OFF key, turntables key, the keys to tune in Long Wave, Medium, Court, FM, and the Treble Control.
We also find the keys O-M and O-UK. The device allows you to store a station in a medium wave and another in FM and recall them with these keys.
The recording takes place by tuning two screws on the bottom. 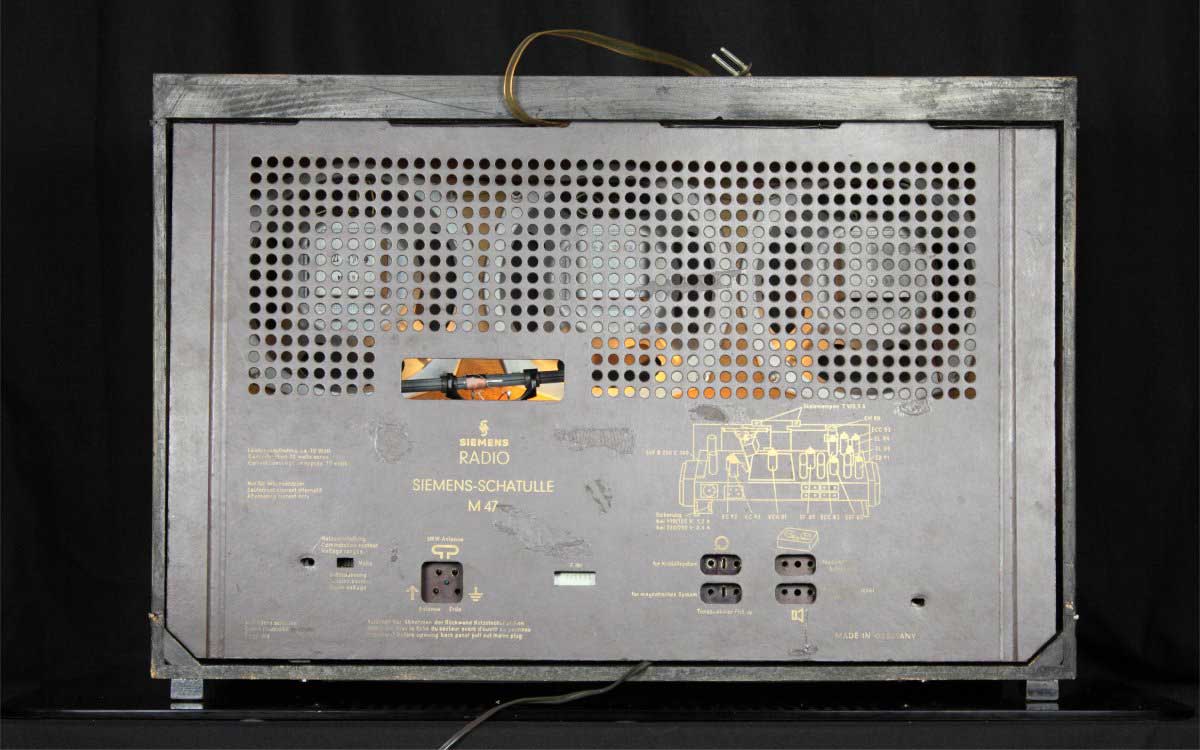 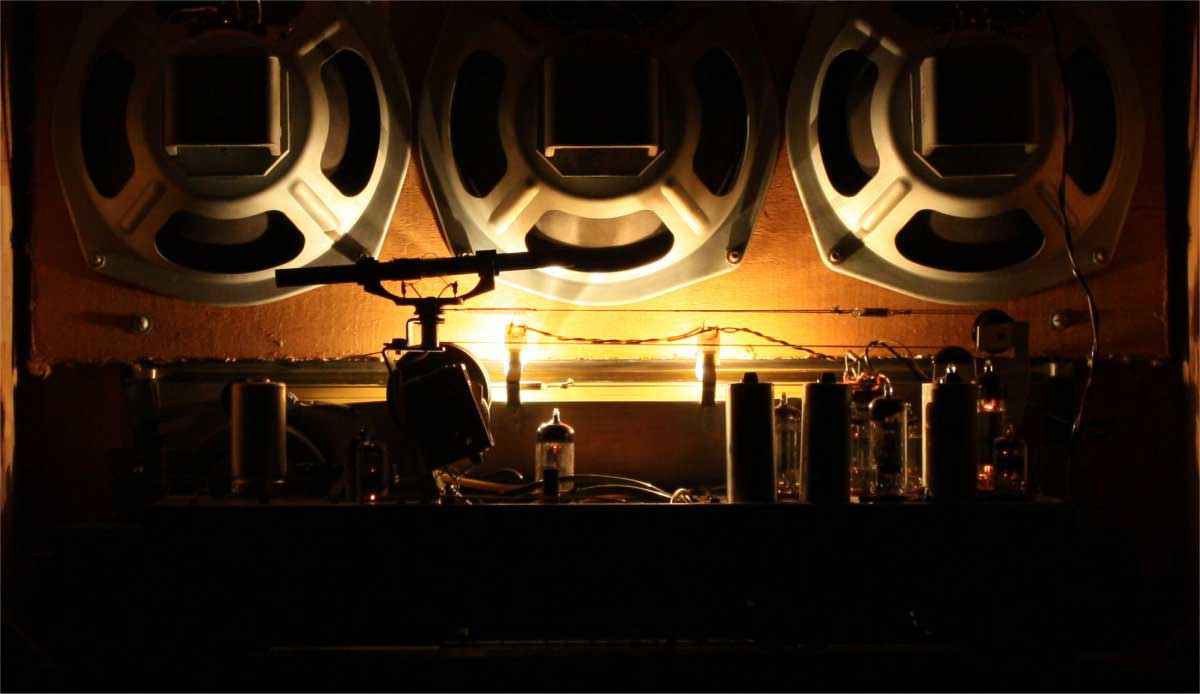