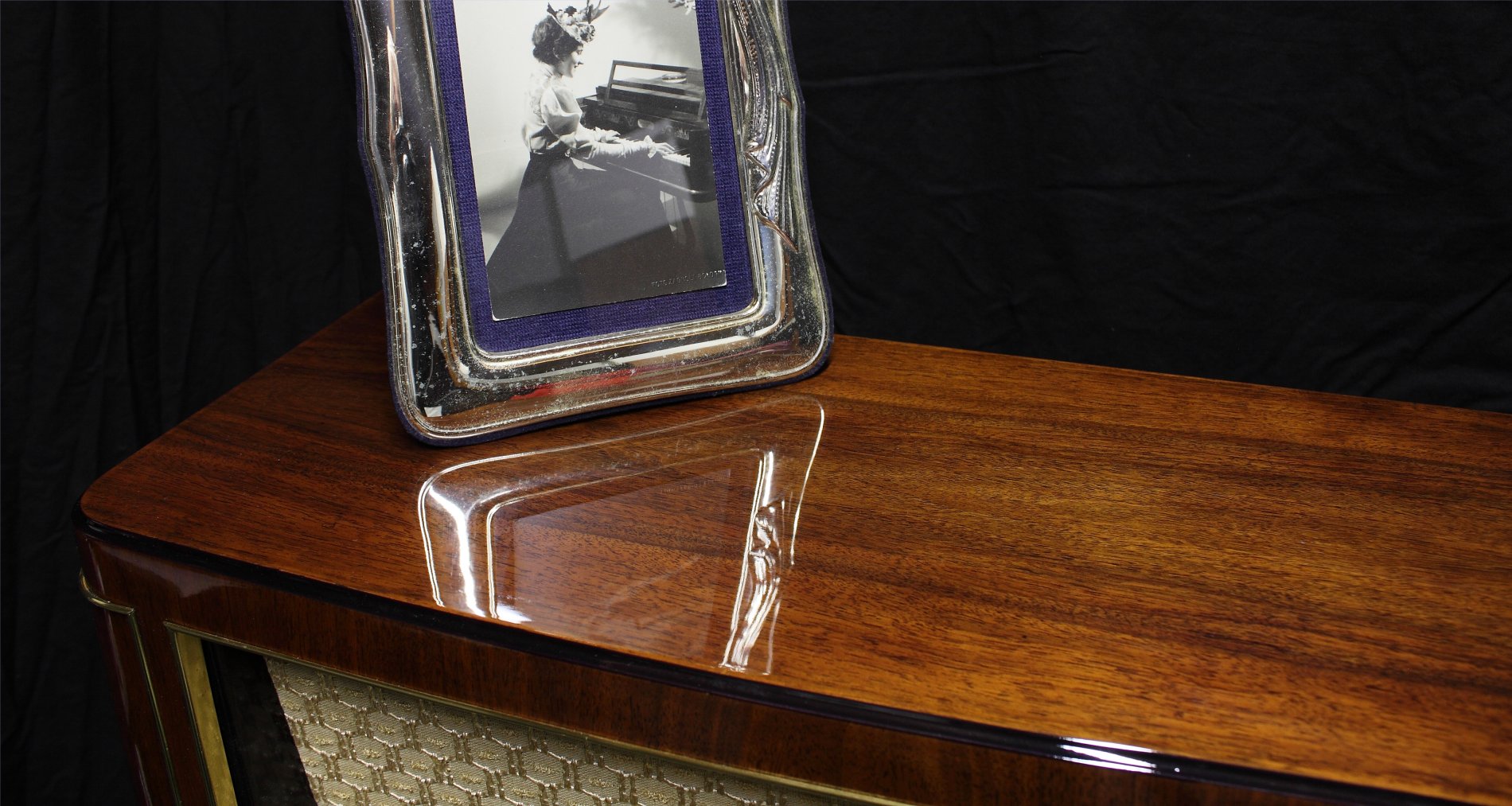 Designed and created in 1954, the OPUS 55 TS was the flagship model of the entire Telefunken production for the years 1954-55.
Since 1949, Telefunken decided to distinguish by the name “OPUS” the radio models at the top of their production. In fact, the first Opus model is the 1949 OPUS 49. This denomination remains until 1978, when the last Opus model, the 7050 HI-FI, is produced. In the following years the different models will be distinguished by alphanumeric abbreviations, such as TR550 and such.

The restoration of this device was very challenging, as the chassis had been cannibalized. As a matter of fact, potentiometers, tube sockets, many components, wires were missing and the HF coils had been torn. In short, the device was in terrible conditions. But a machine like this deserved a much more glorious end and the final result proved us right.
The amplifier stage has been literally rebuilt, the very fine wires of the high frequency coils have been reconnected through a very meticulous work.
The phases of this challenging restoration are documented with photographs, which can be seen at the end of the page in the dedicated section.

The declared output power was 15W but judging by the scheme and the voltages it must deliver about 10.
The good amount of power delivered and the high efficiency of the 6 loudspeakers allow the Opus 55 to successfully sonorize large rooms.
The double medium frequency stage, the complex feedback network, the push-pull output stage make it a classy and elegant radio. The configuration of this device will remain pretty much unchanged also in the following models, until the transition to the production of stereophonic models.
The devices of the Opus series are still among the most wanted by collectors for their extremely high quality standard.

The songs in the playlist highlight the incredible virtuosity of the performers. All these tracks were chosen specifically to put the device to the test. Below is a brief description.

- The first song proposed is a flamenco. Inspired by Playa la Barrosa in Cadiz, Spain, it was composed and interpreted by Paco de Lucia. The talent of the Spanish Maestro makes flamenco enjoyable even for those approaching this peculiar musical genre for the first time.
- With the second track we fly to Paris to meet the Russian-Israeli trumpet player, Sergei Nakariakov. Known as “the Paganini of the trumpet”, Nakariakov's work is fascinating because it continuously experiments with transcriptions of songs composed for other instruments, such as the song proposed here, “Moto perpetuo”, written for violin by Paganini himself.
- The third song, known as “Vento d'inverno”, ranked as op.25 no.11 is a technical study written by F. Chopin in 1836. This study was specifically written with the purpose of developing technique and endurance. It deserves to be seen played live, as it is truly disconcerting. However, Chopin did not mean to impress his listeners with the demonstration of his skills, but he believed his fingers to be “handmaidens of his soul” and with his soul he wanted to be heard, not with ears (H. Heine).
- The fourth track is a 1987 song taken from the album “Surfing with the alien” by guitarist Joe Satriani. An album that was recorded on the cheap, with a very limited budget, the three guitars used by Satriani were modified by him and electronic instruments were used to simulate many drum effects. However, the album was extremely successful thanks to Satriani's skills and creativity. The proposed song is a remastered edition of 2014.
- The last track, “Drum solo”, is a live recording of a performance by Daniel John Erlandsson (Malmö, 1976). Erlandsson is a Swedish drummer, who became successful with the metal band Arch Enemy. It is characterized by a very precise ritmica suono that mixes classic metal passages with the death-metal typical of his band. The song is undoubtedly exciting even for the non-lovers of the Metal genre. 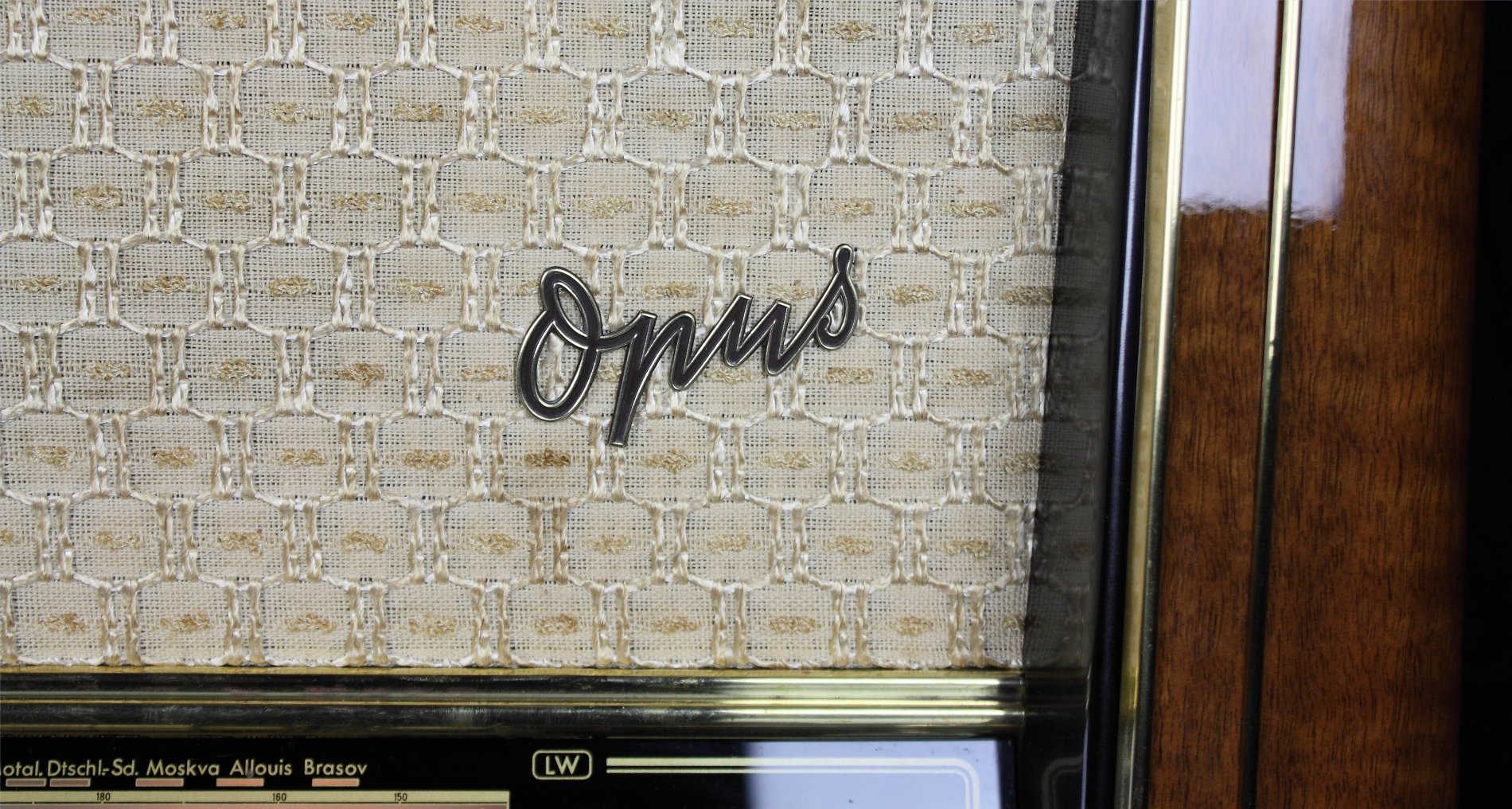 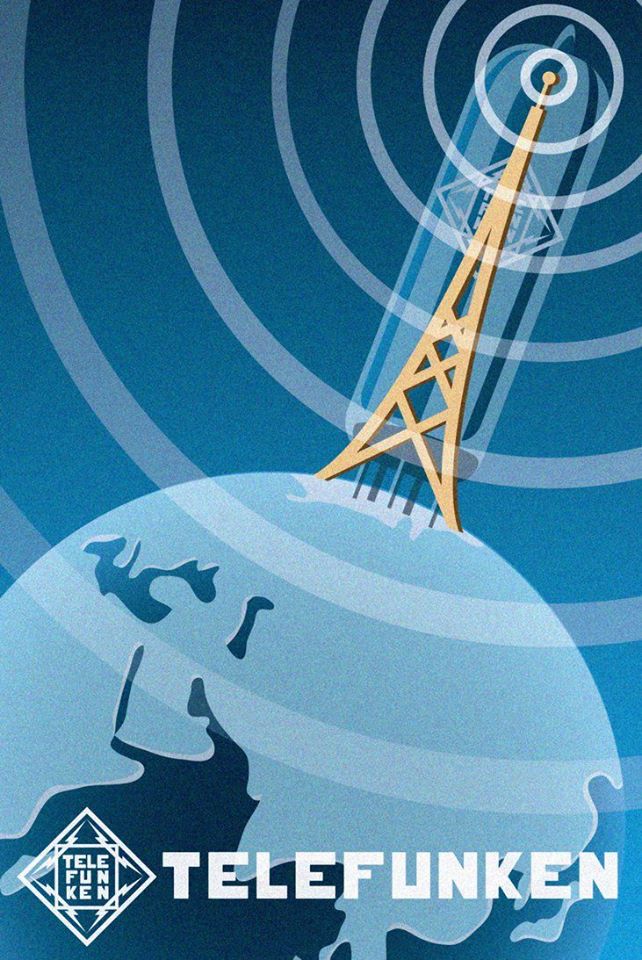 1903 To prevent the English Marconi Company from having a monopoly on wireless transmissions,,Kaiser Wilhelm II orders the company AEG and Siemens to set up a joint venture to develop wireless telegraphy in Germany. It was established under the name of Gesellschaft für drahtlose Telegrafen mbH.

1923 The company name is changed to Firmierung in Telefunken, Gesellschaft für drahtlose Telegrafen mbH. Abbreviated as Telefunken, where Tele means Telegraph and Funken means "Lightning" in the sense of being fast and immediate.

1930 Production gradually moves from military and Government equipment to the production of consumer appliances. During this period, Telefunken enters the market of radio-television, recorders and etching of records.

1930 As radio transmissions are now needed not only to transmit telegraph messages, but also true music and speech broadcasts, it becomes necessary to introduce the concept of sound compression, to avoid continual volume level changes of the radio. Telefunken designs and produces the U3, the first compressor for transmitting stations in the world,. TheU73b, as seen in the picture, represents the evolution of previous models—it allows you to change the compression level, the release times and the attack times.

1941 All Telefunken’s actions are transferred to AEG, which effectively becomes the sole owner of the trademark Telefunken, its factories and patents.

1948 Germany is not invited to the Copenhagen Conference, where the division of Medium and Short Wave radio frequencies of Central Europe is decided. The war has just ended, and officially Germany isn't considered as a technologically important nation. Because of this, Germany decides to develop FM broadcasts even if the quality of the transmissions is considerably higher than those in the AM. At this time, Telefunken develops the V72 microphone/amplification system and its evolutions, intended to be used in all German broadcasters and most European ones too, as well as at the most important recording studios, such as EMI, Decca, Telefunken, etc.

1967 Telefunken is joined with AEG and the company becomes ‘’AEG-Telefunken’’.

1996 The name Telefunken is cleared and all activities related to audio products stop.

Today The company name has been renewed in Telefunken Holding AG. Telefunken and its use worldwide are responsible for the name. In United States Telefunken USA buys the rights to build and market worldwide original microphones and some audio equipment under the brand Telefunken Elektroakustik.
The original company that helped spread the music throughout the world doesn’t exist anymore.

Rotating ferrite antenna for AM bands

This device is equipped with a set of 6 loudspeakers.
Only the Saba Freiburg 14, the Nordmende Tannhauser 59 and some later models of the Opus series are equipped with the same number of loudspeakers. All other German radios, even top-quality ones, have 5 loudspeakers at most.
In the front we find two wideband loudspeakers and two electrostatic tweeters. These loudspeakers are very directional so they are fixed to a prism structure that directs them so that the resulting spread angle is as wide as possible.
Two 10 cm cone tweeter are placed on the sides, cut with a 6 dB/oct filter so that along with the treble they also reproduce medium-high frequencies. The whole audible spectrum is then spread evenly in all directions, granting the listener a complete freedom of movement.

The frontal loudspeakers visible in these photos are not Telefunken originals. All the other loudspeakers are original.

SEPARATED TUNING CONTROL BETWEEN AM AND FM

The tuning system is interesting and different than other devices made in Germany. The device is equipped with separate tuning mechanisms for AM and FM bands. There are two tuning knobs, separate but coaxial, with cable and pulley systems separated depending on the band. This type of tuning has a very strong mechanics.
Regarding maintenance, cleaning and lubricating once every 10 to 15 years is sufficient. 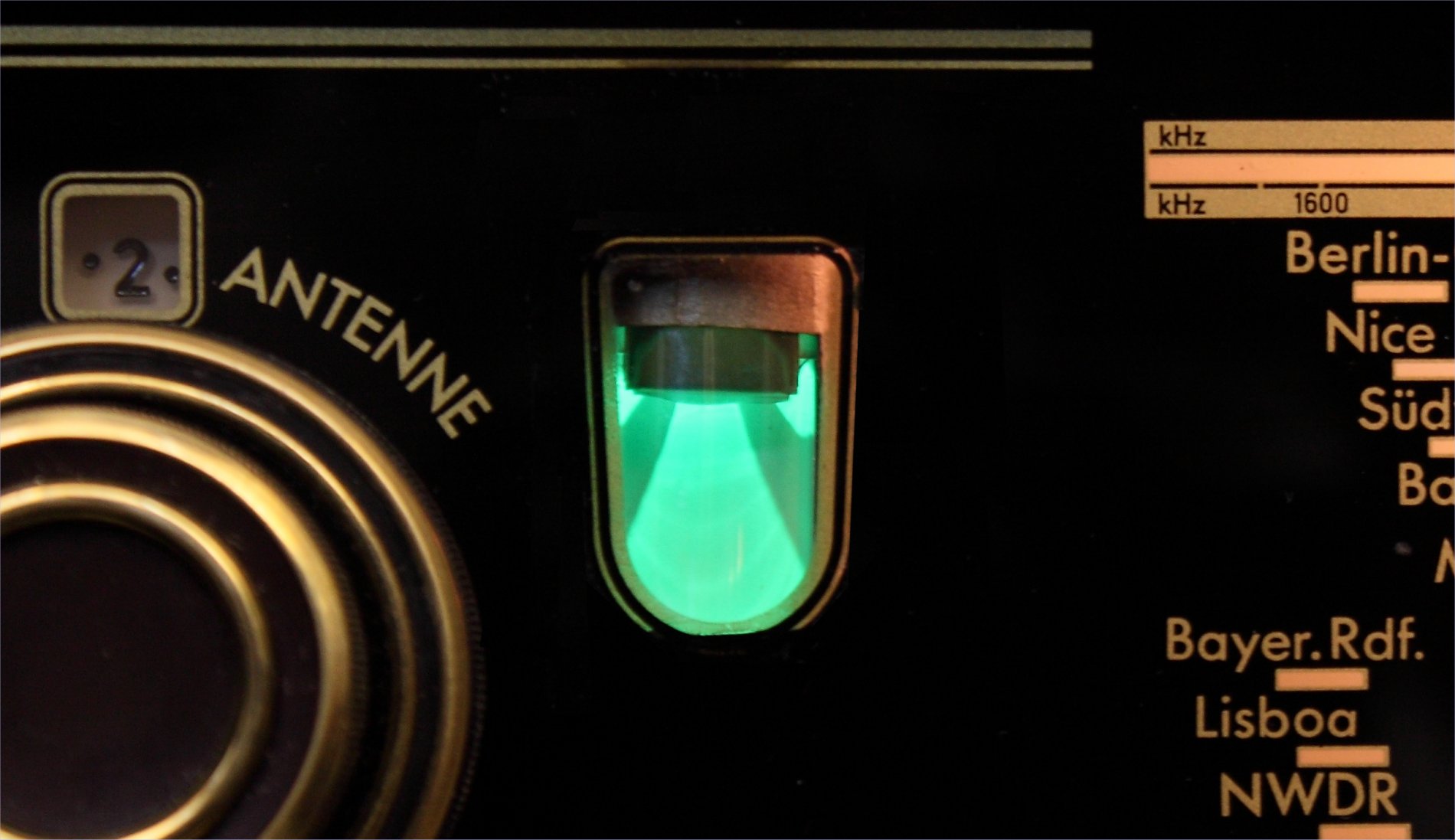 To the right is the volume controls (with built-in loudness)
On the same axis the larger knob controls the position of the Ferrite Antenna. A small window indicates its position.
Then we find the Magic Eye, which indicates the perfect tuning position for each station.
Just below there’s the Bass control knob. On the staff the notes change color depending on the position of the knob.
At the top we can find the dial glass. 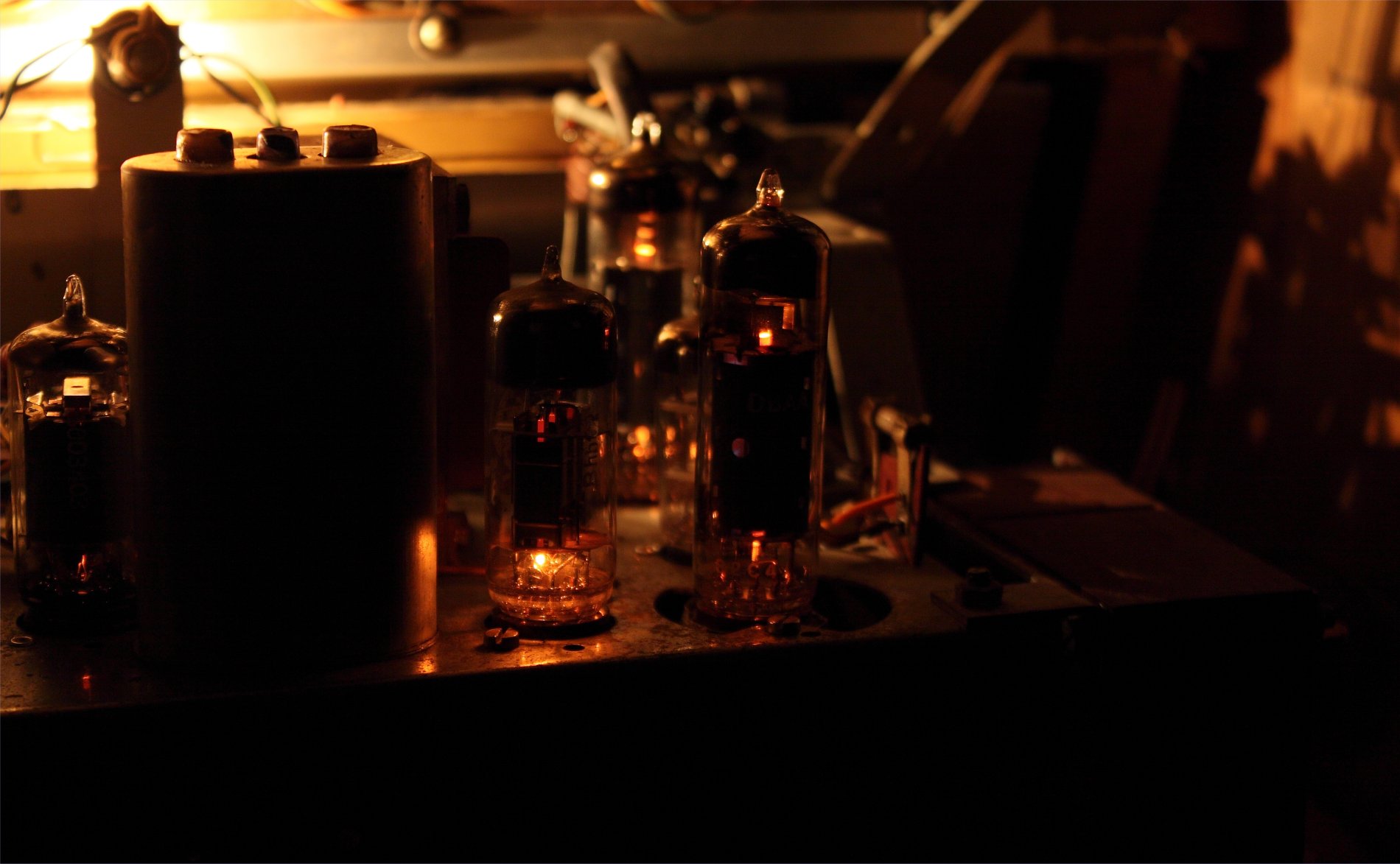